New Delhi: The global economic turmoil has entered India’s labour courtrooms and at least two companies—forced to cut costs due to inventory pile-ups and insufficient orders—have informed the government that they will soon retrench workers.

And at least one international bank has been dragged to court by employees of one of its former associates over non-payment of dues. Experts see employees across industries coming under pressure as firms try to cope with the slowing economy. 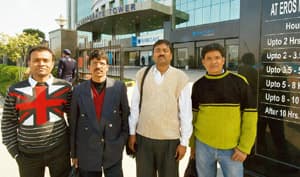 Sent off: Some of those sacked from the Barclays credit card division outside the bank’s office in New Delhi. Ramesh Pathania / Mint

The two manufacturing companies—Larsen and Toubro Komatsu Ltd and Federal-Mogul Goetze (India) Ltd—are both based in Bangalore and have filed applications in the state labour department, declaring their intent to lay off 365 and 1,800 employees, respectively.

Last Monday, the central labour court in Delhi heard the case of former employees of a firm that used to work with the credit card arm of the Indian branch of Barclays Bank Plc. Around 70 of 120 employees have filed a case against the bank for not paying promised salaries for November and December.

The workers, who were fired on 31 October, were hired through Hi-Tech Producers Pvt. Ltd in 2007. Their salaries were paid by Hi-Tech which also earned a commission from Barclays for the business it generated.

Manoj Bansal, a manager at Hi-Tech, said his office has sent two emails to Barclays about the dues. “When we get the money (from Barclays), we pay. When we don’t get the money, how do we pay?" he asked.

In better times, Barclays expanded its consumer banking services rapidly. In May 2007, it began hiring sales agents by the hundreds and hiring firms such as Hi-Tech to staff various offices.

“We lost our jobs overnight and we are jobless now," said Jagdish Chandra Arya, who worked for Barclays as team manager, earning Rs13,000 a month.

A spokesperson at Barclays’ global retail and commercial banking division in India said the company is not in a position to comment as the matter is being heard by the labour court. “However, I would like to clarify that the complainants are not employees of Barclays Bank but employees of Hi-Tech Producers," the spokesperson added.

According to another Barclays executive, who spoke on condition of anonymity because he is not authorized to speak to the media, the bank has laid off 4,500-5,000 people across 16 locations in different divisions, including credit card, personal loan and mortgages.

In the credit division alone, around 2,000 employees were hired through more than one firm, the executive added.

As the economy slows, companies have also started reducing the number of temporary or contract employees, said an official at the central labour commissioner’s office in Delhi. The person, who didn’t want to be identified, declined comment on the numbers but said the people whose jobs have been terminated are mainly those in the income range of Rs6,000-10,000.

“The recession is not affecting the management (level). But the worst is yet to come," he said.

Last month, Larsen and Toubro Komatsu, a venture of India’s largest engineering and construction company Larsen and Toubro Ltd and Singapore-based Komatsu Asia and Pacific Pte Ltd, which makes earthmoving equipment for the mining and building industries, informed the government that it would lay off 365 people.

Around the same time, Federal-Mogul Goetze, one of the country’s largest piston manufacturers, submitted an application to lay off 1,800 workers at its plant in north Bangalore.

Larsen and Toubro declined comment on the issue, but an official in Federal-Mogul’s corporate communications department at its headquarters in Michigan, US, said over the phone that the company is taking measures to react to the local market situations in several regions.

“Federal-Mogul is reacting to a global downturn in the automotive market. We are responding to local customer and market demand and we have requested the lay-off provisions in order to address reduced demand for our products in Bangalore," said Steve Gaut, head of Federal’s corporate communications department.

Karnataka’s labour commissioner S. Narasimaiah confirmed that applications from both the firms were received by his office. Narasimaiah said the applications have, however, been returned as workers have not been informed about the proposed layoff.

Under Indian law, companies are expected to inform permanent workers about any effort to retrench them. There is no such provision for contract workers, though they have the right to contest a retrenchment.

H.V. Anantha Subba Rao, president, Federal-Mogul Goezte (India) Employees’ Association, said the company, which shut shop for a week in November due to slow orders, had also proposed to the union that the plant be shut down for 15 days every month between January and December this year and that employees surrender three days of leave every month for a year. The union did not agree to this, Rao said, terming the request to surrender leave as a way to get employees to “work free" for the company.

“This means the entire burden of the crisis is being shifted on the shoulders of the workers. The management will not share anything," said Rao, whose association is affiliated to the Communist Party of India-supported All India Trade Union Congress.

A Larsen and Toubro Komatsu employee, who is also a member of the employees union at the company and who did not want to be identified, said the company operated the shop floor between three and four days a week in November and December, but reverted to a five-day schedule last week. “But the management also wants us to surrender our leave in lieu of those off days."

In October, India witnessed the slowest ever industrial growth in 15 years, plummeting to the negative zone at -0.3% (over the previous October). While November’s number was better at 2.4%, analysts forecast cumulative output for 2008-09 to remain in the range of 2.5-4%.

During the first eight months (April-November) of the year, growth in factory output was 3.9%, compared with 9.2% a year ago.

“I suppose we should expect layoffs in industries that are export-linked to increase. My reading is that many units have already been closed, and more will occur," said C.P. Chandrashekhar, professor at the Centre for Economic Studies and Planning, Jawaharlal Nehru University, New Delhi.

Some companies are working out ways to blunt the impact of financial woes. At lorry maker Ashok Leyland Ltd’s Chennai plant, the management and the union have reportedly struck a deal to keep the shop floor operating only three days a week.

The management has, however, agreed to pay full wage to workers, and according to R. Kuchel, president of Ashok Leyland Employees’ Union, “the arrangement is working fine and is temporary". He also said several automobile companies and parts makers in Tamil Nadu are cutting down production hours at factories and that contract labourers, apprentices and others who do not have permanent jobs have been hit badly.

For many such as Delhi-based Meenu Kashyap, who used to sell credit cards for Barclays for Rs5,500 a month, the job market is not looking encouraging at all. The 29-year-old widow has two children, Abhinav (10) and Kamya (four-and-a-half).

Waiting outside the labour courtroom on the first hearing day, she said she had diligently secured 25-30 new credit card customers a month for the bank, meeting all the targets on time. “I am now looking for another job... I can’t now sit around doing nothing. But private jobs are not safe at all."