Home / Companies / News /  Uber vs Ola: The battle for dominance in India’s taxi market
Back
Share Via

Uber vs Ola: The battle for dominance in India’s taxi market

For Ola, it's a question of holding fort, and for Uber, that's been held at bay in China, it is one of capturing a significant share in a market that may grow to $7 billion by 2020

Bengaluru: They’ve taken each other to court.

They have postured about their market shares.

And they seem to viscerally hate each other.

Cab aggregators (or ride-hailing services) Ola (ANI Technologies Pvt. Ltd) and Uber Technologies Inc. have done it all in the past four months as they have tried to assert their dominance in India’s largely fragmented cab market, the last frontier left to conquer in Asia after China, where home-grown business Didi Chuxing, now an Ola investor, rules the roost.

Indeed, Ola, one of a handful of Indian unicorns (start-ups valued at more than $1 billion), has emerged as a key player in the broader coalition against Uber. It has become part of a larger campaign against Uber’s growing global dominance. With a valuation of $68 billion, Uber is the world’s most valuable start-up.

Ola’s backers include SoftBank Group Corp., which has invested in two of Uber’s biggest rivals, Didi Chuxing in China and GrabTaxi in South-East Asia, and the $28-billion Didi Chuxing itself, making it one of the key pieces in an anti-Uber alliance that also includes the San Francisco-headquartered Lyft Inc.

That means the rivalry between Uber and Ola is unlikely to end anytime soon. There will be more money, much more money invested in both. Both sides will play dirty.

And consumers, even drivers, may end up winners, at least in the short term. For Ola, it is a question of holding the fort—it is still the market leader in India by a fair margin, while for Uber, which raised a further $5 billion in June, it is about making a mark in a key market.

India itself is the other piece in this rivalry. The country of 277 million Internet users, which barely registered as a blip in the global market for cab aggregators (in terms of rides) in the first quarter of 2014, grew into the third biggest market after China and North America in the first quarter of 2016, according to the Internet Trends-2016 report by Mary Meeker, partner at Silicon Valley venture capital firm Kleiner Perkins Caufield and Byers.

The stakes are high. India’s cab business, according to SoftBank Group, may be worth $7 billion by 2020. And both Uber and Ola want most (if not all) of it.

An Ola spokesperson responded to some questions.

Ola, a brainchild of Indian Institute of Technology-Bombay graduates Bhavish Aggarwal and Ankit Bhati, would not have possibly become the force it is today had the company continued the way it started, dabbling in everything from outstation trips to hourly packages to point-to-point drops. Soon after its launch in late 2010, the company dumped all distractions to focus on point-to-point drops, much like its peer Uber.

Ever since, Ola has grown. And its growth has hurt traditional taxi businesses such as Meru Cabs (started in 2006) and Mega Cabs (started in 2001), which were slow to respond to the rapidity with which Indian customers adopted app-based cab-hailing services. The incumbents continued to focus on phone bookings.

Ola sped past its predecessors. Meru’s revenue in the year ended March 2015 was ₹ 280.57 crore against Ola’s ₹ 418.25 crore. Meru had been in business for about nine years then, while Ola’s big moment came only in October 2014, when it raised $210 million from SoftBank.

Uber was a fledgling business in India until early last year, with just about 5% of the market share in January 2015. Having launched in India amid much fanfare in November 2013 with high-end cars, Uber soon changed track to low-cost offerings suited to the local market. It was already battling the establishment, trying to first cope with the Reserve Bank of India’s directive mandating two-factor authentication for credit card payments, a major blow to its feted cashless payments, and then the rape of a woman by a driver affiliated to Uber in Delhi, which triggered a regulatory backlash.

The older competitors watched from the fringes.

“The likes of Meru and Mega were focused predominantly on the airport business and they got supply initially by buying their own cars. Now, with Ola and Uber coming in, it became difficult for them to change their business models, which worked well for the high ticket size items in the range of ₹ 500-600. Ola and Uber were designed for high frequency, multiple short rides with small ticket sizes, and the others lost out in the process," said Rutvik Doshi, director at Inventus Capital Partners.

The tide was in Ola’s favour until the middle of 2015, said industry executives, but the narrative was to change soon.

In June last year, Uber appointed Amit Jain, formerly president of US-based housing rental site Rent.com, as its India head. The following month, Uber committed an investment of $1 billion in India, enough to rattle Ola at a time deep coffers were needed to attract drivers with unprecedented incentives and consumers with rates they could not resist. By then, Ola had raised about $675 million, a significant amount, but no match for Uber’s massive war chest.

In May, Uber introduced cash payments in India for the first time in Hyderabad and extended it to Bengaluru and Delhi, two of its biggest markets, by September. Currently, Uber allows cash payments in all 27 cities where it operates.

“Cash payment was a big shift. Just by allowing cash payments, it (Uber) opened itself up to the multitude of consumers who don’t have credit cards or do not want to pay via debit cards. That was clearly a watershed moment for it. Besides, Uber’s product was superior," said Doshi of Inventus.

Uber also slashed fares for its low-cost offering UberGO to ₹ 7 per km, lower than the ₹ 10 per km charged by Ola for its cheapest offering, Ola Mini.

The move helped the company wean away consumers from Ola, according to multiple industry executives, though cash burn escalated significantly. But, again, Uber had the money to burn. 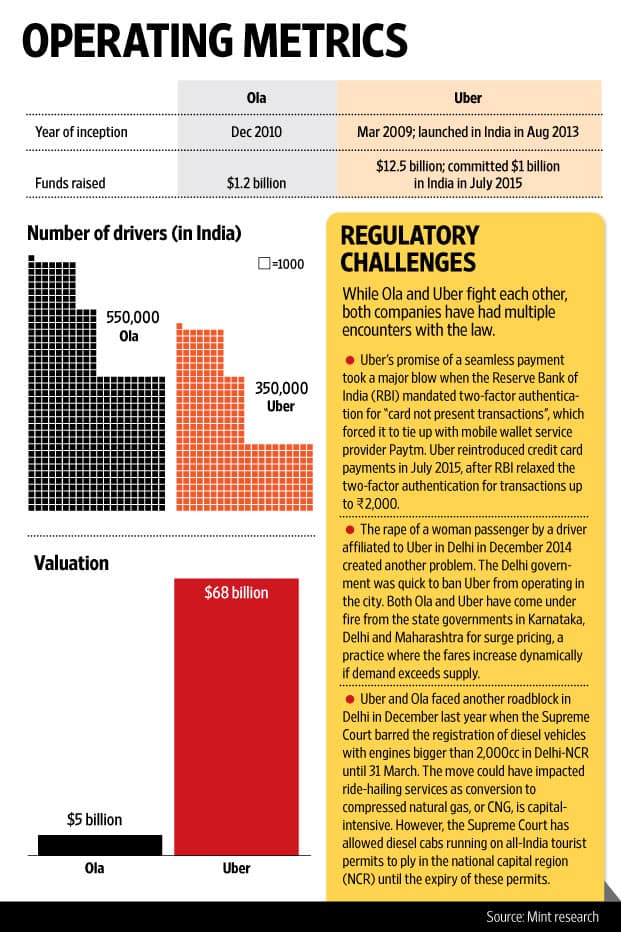 According to industry experts, Ola’s focus wavered for a while last year as the company launched consumer-facing food- (Ola Cafe) and grocery-delivery businesses (Ola Store), and dabbled in shuttle services. In a business where supply of cabs rather than consumer demand is the chief constraint to growth, these initiatives ended up distracting Ola from its core cabs business at a time when Uber was singularly focused on catching up with its local rival.

The results: Ola’s market share eroded slowly and Uber claimed to have captured about 35-40% of the market by March. That month, Eric Alexander, president of business in Asia for Uber, told Mint in an interview that Uber would overtake Ola by mid-April. That was not to be.

Ola shuttered the food and grocery businesses in March to throw all its weight behind its core business to keep Uber at bay.

Much like their peers in online retail—Amazon.com Inc. and Flipkart Ltd—Uber and Ola have unleashed a price war which has resulted in a windfall for consumers and upped the stakes for investors.

In an attempt to counter Uber’s overbearing presence, Ola, which raised $500 million more in November 2015, launched a new category called Micro in March. Priced at ₹ 6 per km, Micro was cheaper than UberGO. Soon, and perhaps in response to Alexander’s boast, Ola was claiming that Micro as a category was bigger than Uber’s entire India business.

“While discounts help in acquiring customers, they may or may not ensure loyalty towards the brand. We believe that constant consumer-driven innovations, along with a robust supply and availability, can help build loyalty and trust. We believe in building value for customers by offering a wide range of options to suit different needs and use cases," an Ola spokesperson said in an email response.

Since its launch in early March, Ola has reversed much of last year’s market share loss to Uber and opened up a big gap against its rival, Mint had reported on 15 June.

But the reversal of fortune has come at a cost. While Ola’s market share has jumped since the launch of Micro, so has the company’s cash burn.

Consequently, Ola, which has raised about $1.2 billion from investors so far, has to scout for more funds to match Uber’s spending power. Uber raised $3.5 billion from Saudi Arabia’s Public Investment Fund and is in talks to raise another $2 billion in leveraged loan, The Wall Street Journal reported in June.

A significant part of the money is likely to be invested in India.

Ola has also initiated talks with investors, both new and existing, to raise another $300-400 million, Mint reported on 15 June. To be sure, investors are increasingly becoming cautious about their bets, with even online retailers such as Flipkart and Snapdeal (Jasper Infotech Pvt. Ltd), struggling to raise funds at their current valuations.

Both Ola and Uber need more cash as they invest heavily in customer acquisition and retention, driver incentives and a steady supply of (new) cabs. Analysts say because Ola is the only Indian cab company of any scale, it has a better chance of raising money than leaders in other businesses.

Besides, one of its strategic investors, Didi, is flush with funds, having raised $7 billion in June from a clutch of investors, including Apple Inc. and China Life Insurance Co.

Ola has started a new leasing subsidiary, Ola Fleet Technologies Pvt. Ltd, and committed an initial investment of ₹ 500 crore to this arm, while Uber invested about $7 million in its leasing partner, Xchange Leasing India Pvt. Ltd, between January and March, Mint reported on 15 June.

“We have close to 80% market share and we will continue to build on our competencies. We are an Indian company with a much deeper understanding of the needs of Indian consumers, and our focus is to offer seamless experience to them. It is always good to have competition. It keeps us agile," the Ola spokesperson said.

But it isn’t easy to succeed in the cab business, an expert said.

“The kind of customers you want to approach with your offering matters. For example, the upper middle class or premium customers are a thin segment. You need to get into the middle class. They are going to be hard-nosed about how much they spend on transportation every month. That means price points need to be lower to attract a larger audience," said Vinod Murali, managing director, InnoVen Capital India.

“Over a period of time, the volume will ensure the business starts making sense even at a lower price point," he said.

That remains to be seen.

Neither Ola nor Uber seems keen to take its foot off the pedal.