Infrastructure firms return to QIP market in 2018 as orders swell

Mumbai: Infrastructure firms have returned to the fundraising market after a gap of almost a year as orders surge and the outlook for the sector improves. 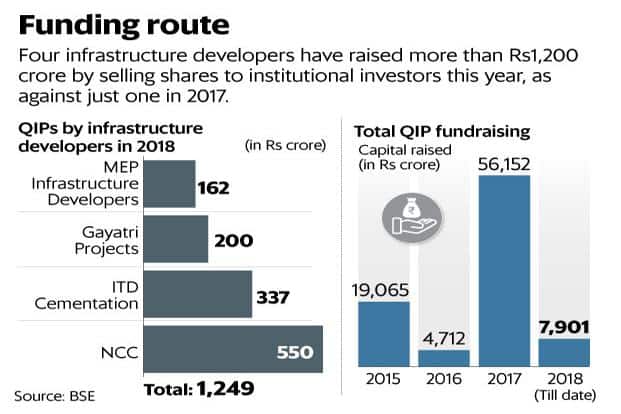 NCC Ltd raised Rs550 crore—through the qualified institutional placement (QIP) route—the largest amount raised among the four engineering, procurement and construction, or EPC, companies that have hit the market so far in 2018.

In contrast, only one infrastructure developer used the QIP route to raise funds in 2017, a year which saw record funds being raised through this route. In 2017, 43 companies raised Rs56,152 crore through QIPs, according to data from primary market tracker Prime Database. In comparison, 10 companies have raised Rs7,900.57 crore through QIPs this year, data shows.

The renewed investor interest in EPC companies stems from the fact that activity in the infrastructure sector has been picking up in the past year-and-a-half, leading to healthy order books.

“The activity in the construction sector is very high right now. There is a strong order flow. This activity has been building up for the past one-and-a-half years and so today we see firms with strong order books," said Girish Nadkarni, managing director at investment banking firm Motilal Oswal Investment Advisors.

The infra developers cited above have raised funds primarily to fund their working capital requirements, given the backlog of orders that they are carrying now.

“NCC (order) inflows for FY18 YTD (year to date) were up 179% over the previous year at Rs21,600 crore and management is hopeful of adding an incremental Rs2,000-3,000 crore in Q4. Robust inflows provide a strong case for revenue re-rating. Current order book of Rs31,100 crore shows healthy revenue visibility for 3-4 years," said Elara Capital in a report on NCC Ltd on 15 February, highlighting the robust order flows that infra developers are seeing.

A major part of the order flow is coming from increased government spending, said experts.

“EPC companies have a healthy order book. The government is spending a lot on infrastructure projects and project allotments have been happening at a strong pace," said Munish Aggarwal, director at investment bank Equirus Capital.

In the budget speech, finance minister Arun Jaitley said the government will invest as much as Rs5.97 trillion in building and upgrading infrastructure in the next fiscal year.

According to Nadkarni of Motilal Oswal, infra developers have also benefited from improved cash flows, which is also attracting investors.

“The structure of the industry has also changed, the projects are coming on time and payments are happening on time. Hence, cash flows have improved. It is a good growth opportunity and hopefully more investors will look at investing in this space," he said.