Safal units threaten to put local vendors out of business

Safal units threaten to put local vendors out of business

Noida: For four years Sanjay Kumar had the main traffic circle of Noida’s Sector 61 all to himself, dispensing fruit and vegetables to the neighbourhood. He occupied the niche that the big grocery chains couldn’t fill, at least up until last week.

That’s when a company that posted Rs3,300 crore in sales last year rolled up and set out its new open-air outlet close to Kumar’s makeshift shack. The sign outside said Safal and signified yet another neighbourhood takeover by Mother Dairy Fruit and Vegetable Pvt. Ltd, a cooperative run by the National Dairy Development Board and New Delhi’s ubiquitous supplier of milk. 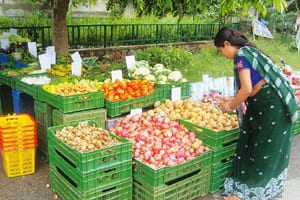 What started as a concept two years ago with a couple of counters has been turned into a business opportunity by Safal with at least 100 such temporary outlets being set up in several neighbourhoods in New Delhi and its suburbs of Noida and Gurgaon.

It plans to double the number of these temporary stores by the end of the fiscal year ending March. Typically, such stores open in the morning for housewives stocking up on groceries and to shoppers returning home in the evening from work.

Safal operates at least 400 regular outlets selling fresh produce, processed foods, frozen vegetables and ice cream among other food products. The makeshift extension counters operate in the vicinity of bricks-and-mortar stores through a hub-and-spoke model, with the unsold material going back to the main outlet.

The extension counters currently contribute about 10% of Safal’s fresh business and the company provides incentives to franchisees to open more such counters. Safal is inundated with demand for more such counters, says Sunil Bansal, chief executive for fruit and vegetables at Mother Dairy.

“People are asking us to open shops in their areas," Bansal said. “We provide extension counters at locations where the volume may not be of the level (that) we can operate a shop."

Things are looking up for Meta

India misreads China’s LAC intentions at its own peril

How a balloon burst Sino-American talks

Even though the extension counters are open mostly in the morning and evening, the counter in Noida’s Sector 61 is already a big draw. On Tuesday evening, several customers were picking fruits and vegetables in yellow Safal shopping baskets while Kumar’s store was deserted.

“I like the way it’s organized… with variety, with a price list mentioned and an electronic weighing machine so the vendor cannot manipulate the price seeing a customer coming in a big car," says neighbourhood resident Neha Mukherji after buying mushrooms, bell peppers and baby corn. The 28-year-old Mukherji, who makes a weekly purchase of about Rs300, says she has “almost switched" her loyalties to the Safal counter from the nearby street vendor.

Safal has thus far avoided the kind of backlash that stung retail chains in some areas after trying to set up grocery stores.

ITC Ltd’s plans to hawk fruits and vegetables on push-carts in neighbourhoods invited the ire of existing tradesmen, who feared that big companies could threaten their livelihood.

In 2007, the Uttar Pradesh government ordered Reliance Retail Ltd, a unit of Reliance Industries Ltd, to shut its grocery stores, blaming them for creating unrest among small and unorganized vendors. The protests turned violent, with the vendors ransacking stores belonging to Reliance and other chains.

While the protests seem to have died down, Bansal admits that resistance from street vendors is one of the major challenges the company is facing, although he declined to elaborate.

With the National Capital Region burgeoning, sucking suburban localities into its orbit and newer neighbourhoods mushrooming, the need for everything from shops to schools is surging. Safal also plans to extend the model by introducing mobile vans.

“We are preparing for the future. When particular localities develop, people will have Safal in their minds and possibly we can create full-fledged outlets there," Bansal says.

That strategy has already worked in Noida’s Sector 62, where a similar extension counter was converted into a full-fledged Safal store as the population grew.

“It’s a win-win situation for both Mother Dairy and consumers," Bansal said.