Mumbai: Tata Motors Ltd posted the lowest profit in nine quarters in the three months ended 31 March as demand dropped for its luxury Jaguar and Land Rover (JLR) marques in China, the world’s biggest automobile market, and its Indian operations posted a loss.

Tata Motors was hit by slowing demand in China, where sales of its Jaguar-Landrover (JLR) unit dropped 20% to 24,363 units in the three months to March from a year ago. The China region’s contribution to the company’s sales shrank to 23.5% in the quarter from 29.6% a year ago. 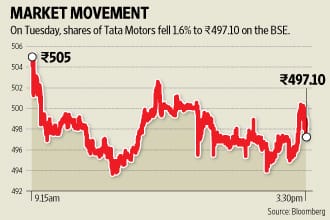 Tata Motors’ earnings were also crimped by higher depreciation charges and unfavourable currency swings that prompted a revaluation of its foreign currency-denominated debt.

“Our channel checks indicate that luxury car growth in China remains flattish in May," analysts Jatin Chawla, Bin Wang, Akshay Saxena and Mark Mao from Credit Suisse wrote in an 18 May report.

They attributed slowing luxury car sales in China to weak demand amid an economic slowdown in the country’s coastal areas, where a population with high disposable incomes used to be the main driver of global vehicle brands.

In the months ahead, JLR will be ramping up the launch of the Jaguar XE and launch the XF. It will introduce the Range Rover and F Pace in the next calendar year.

Profit after tax for the JLR unit fell 33% to £302 million from £449 million a year ago. The company took a hit from higher depreciation and amortization expenses and unfavourable revaluation of foreign currency debt and unrealized hedges.

Vijay Somaiya, vice-president and head of treasury and investor relations, said the impact of foreign exchange losses during the quarter was £220 million.

In line with the previous year, the company plans to invest £3.6-3.8 billion for new product launches and ramp-ups at existing facilities.

“While the volumes are in line with expectations, the profits were below our estimates, largely because of the foreign currency fluctuations," said Piyush Jain, an analyst at Morningstar.

At the consolidated level, the operating margin narrowed to 12.9% from 14.9% a year ago on account of higher depreciation charge and mark-to-market losses on revaluation of foreign debt, said Ajay Shethiya of Centrum Broking Pvt. Ltd. He retains ‘buy’ rating on the stock.

“We will continue to monitor the China market and other emerging markets closely," said Somaiya.

Tata Motors also skipped paying a dividend to its shareholders for the year ended 31 March, the first time since 2002 that it has done so.

“We had to skip the dividend as we are incurring losses," said Somaiya.

He expects margins in the local business to start recovering from the second half of the current financial year as sales of heavy-duty trucks gain traction and light truck sales recover. During the quarter, Tata Motors sold a total of 139,053 units (including exports), up 5.1% over a year ago.

Even as its Indian unit posted a loss, standalone operations turned profitable at the earnings before interest, tax, depreciation and amortization level for the first time in five quarters.

“This indicates the recovery in the truck volumes have started to show an impact on earnings," said Morning Star’s Jain.