Bengaluru: Infosys Ltd’s chief executive officer Vishal Sikka has hired two more of his former colleagues at German software firm SAP SE and tasked one of them with building a team out of Palo Alto to develop high-performance computing platforms, new products and enterprise solutions.

The move shows that India’s second-largest software services company is using the Silicon Valley base as the nerve centre of its efforts to transform itself into a next-generation services company.

Radalj, who will be based out of Palo Alto, has been asked to put together a team of 10 executives, who will focus on high-performance computing platforms and databases such as “not only structured query languages" or NoSQL.

He is the 13th senior SAP executive to join Infosys since Sikka took over as CEO in August last year.

“For Infosys to succeed in the new model, software is key to helping them drive down delivery costs and create new affirms and offerings for growth. (So) Vishal is tapping into the pool of talent that he trusts to execute," said Ray Wang, founder of Constellation Research.

Earlier in February, Infosys hired Stefanie Mueller, former chief operating officer, analytics, at SAP, as executive director to be based out of Mannheim, Germany. 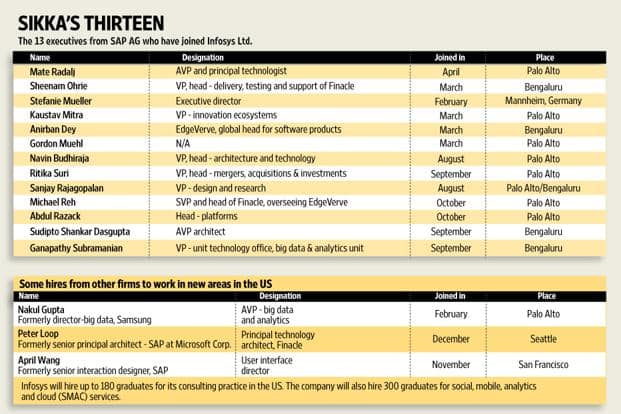 Eight of these 13 SAP executives are stationed out of Palo Alto, with the company also relocating some leaders from businesses that operated out of India.

These include Sanjay Purohit, boss of Infosys Consulting, Abdul Razack, head of platforms, and Kaustav Mitra, who was hired last month and has the mandate of helping Infosys woo start-ups working in disruptive technologies in Silicon Valley.

“Clearly we are seeing Palo (Alto) becoming the ‘nerve centre’," said a Mumbai-based head of research at a domestic brokerage firm who asked not to be identified.

“Suggestions that Infosys might be managed out of Palo Alto are a reflection that the transformation of Infosys is gathering momentum," said Thomas Reuner, principal analyst at Ovum, a London-based IT research firm.

“The reference point should be SAP who had moved many client-facing capabilities to the US while preserving their engineering-led heritage in Germany, thus aiming to combine the best of both worlds. But the journey of transformation will continue to be challenging with many bumps on the road ahead."

Radalj will report to Navin Budhiraja, Sikka’s former colleague at SAP and currently V-P, head-architecture and technology at Infosys.

Under Sikka’s strategy of helping Infosys customers transform their business, Budhiraja and Radalj are expected to push their engineers to write better software across business functions, including manufacturing, healthcare and financial services. For this reason, the company is hiring engineers who can analyse very large data sets, using new types of databases including MongoDB, Simple DB and Cassandra.

“Working on NoSQL (databases) makes a huge difference," said an engineer working on big data analytics at the Bengaluru office of the company.

“Say, for a query from an insurance client, you run different models and analytics against billions of customer records. If you work on traditional databases, it could be weeks before you got a solution based on what statistical model you are employing. Working on these (NoSQL), you can get your job done in less than an hour."

Sikka’s aggressive push to make Infosys stay relevant in the fast-changing technology landscape is further mirrored by the hiring made by the firm across next generation service areas.

Last November, Infosys said it planned to hire 300 graduates in the US to work in new technology areas, including digital, big data, analytics and cloud.

Hearteningly for Infosys, higher recruitment in the US should not push up the wage bill as the company “has room to correct its onsite cost structure", according to a 13 April note of Kotak Institutional Equities.

Infosys has more than halved its pool of employees with up to three years’ experience at client facing locations to 32% since December 2006, according to the note prepared by Kawaljeet Saluja, head of research at Kotak Institutional Equities.