Mumbai: Having lifted Yamaha Motor Co.’s flagging fortunes in India to some extent with the FZ series bikes launched in September 2008, the local unit of the Japanese motorcycle maker is now eyeing bolstering its presence in the entry-level segment that accounts for one of every two bikes sold in the country. 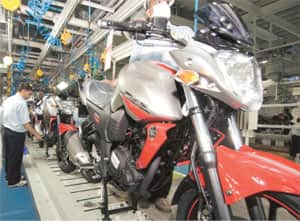 Yamaha plans to launch the YBR, a 110cc motorcycle on 14 April, according to a Bangalore-based dealer, who declined to be named. This will be followed by the SZ, another model in the 125cc segment, in the second half of the calendar year.

Yamaha is currently a fringe player, with less than 3% marketshare in the 9 million-unit Indian two-wheeler market. But it is eyeing a 10% market share by 2012, said Pankaj Dubey, national business head at India Yamaha Motor Pvt. Ltd.

He said even though the new models will be crucial to the company achieving its target, they were not expected to prop up overall sales immediately.

“We are aiming at a gradual but steady improvement in sales," he said.

Yamaha currently sells Alba, G5 and Crux models at the entry-level. But they have been unable to replicate the cult status enjoyed by RX100, which was phased out in the late 1990s.

The company’s sales are skewed in favour of the 125cc to 250cc segment, which accounts for around 23% of total motorcycle sales, according to business researchers Credit Analysis and Research Ltd.

With high-end motorcylcles, Yamaha’s sales focus has also been confined to the metros until now.

But the new entry-level models will help the company diversify into smaller cities and towns, said Dubey.

Dubey said he was confident the company’s strategy of being “closer to the customer" will ensure that it steers clear from the mistakes of the past—when it was dogged by low volumes, sales and service issues.

Encouraged by the lower penetration and increasing disposable incomes in semi-urban and rural areas, auto makers, including two-wheeler makers, led by Hero Honda, have identified such areas as the next frontier of growth.

Abdul Majeed, partner at consulting firm PricewaterhouseCoopers, said Yamaha was better positioned to make a mark in the entry-level segment after addressing concerns like after sales service and reach.

But he cautioned that with stiff competition and availability of several models, “the new models need to have strong differentiators".