DTZ International Property Advisors said in an August report that the slowdown in economic growth and weak consumer sentiments have resulted in a sense of uncertainty among retailers thereby putting expansion plans on hold.

With the discount sale season just getting over, what are your expectations from the new season? Are you going to increase prices?

After the discount sales, it’s festive season now for some markets but going forward, we expect things to move slow for a while, with the other major festivals coming in only much later this year. 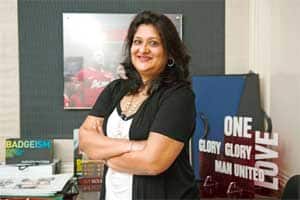 Building space: Aggarwal says last year the firm opened around 16-18 stores, and it intends to open the same number of stores this year. (Aniruddha Chowdhury/Mint)

Indus-League has the license to sell the sportswear brand Manchester United in India. What is the strategy to sell the brand here and what are your plans?

The response to Manchester United stores and the merchandise has been extremely positive and we have been surprised by the kind of fan following the brand has, particularly among youngsters.

We have already opened seven Man U stores and will open another five stores in the next three months. The merchandise will also be available in Planet Sports stores and shop-in-shop formats. Though as of now Man U stores are mostly coming up in metros, we are opening one store in the new World Trade Centre in Jaipur.

In smaller markets in tier II and III cities, we were finding it a little difficult to run our own stores owing to manpower and other logistical issues, and so we decided to open 10 franchise outlets more as a pilot project to see how they do. We gave them six months this year, and now we have decided to open another 10 by this Diwali.

The franchise format would also speed up stores in these markets. While we are not opening any flagship stores there, we will use a combination of two-three brands in each store.

Have you seen any interesting buying patterns that have emerged in recent months in a slow retail scenario?

We have noticed that womenswear is doing much better than menswear, particularly for our brands such as Scullers, Urban Yoga and Jealous 21, which is our fastest-growing brand. We see all these brands growing at around 30-40% a year. This is because while men buy a lot during the sales season, women don’t mind buying at full prices through the year if they like something. Women are also more particular about dressing according to the season, and so they often shop on the arrival of a new season.

What’s the expansion outlook for Indus-League and for the overall sector?

Last year, we opened around 16-18 flagship stores and we intend to open the same number of stores this year. Among this, 40-50% will be in high streets and the rest in shopping malls.

Mall activity is slow with few who can manage malls efficiently, but except in smaller cities, high streets are fading out and people are moving to malls. We will keep our multi-brand store format Headquarters and the Man U stores mostly in malls.