Spice interested in bidding if Satyam opts for open auction

Spice interested in bidding if Satyam opts for open auction

Hyderabad: A unit of Spice Group, Spice Innovative Technologies Ltd, is likely to re-enter the bidding contest to acquire a 51% stake in fraud-hit Satyam Computer Services Ltd if the board takes more measures to boost transparency, group chairman B.K. Modi said on Sunday. 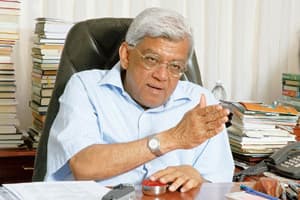 Revised schedule: Deepak Parekh, a member on the Satyam board. The board had modified the bidding process for a stake in the firm. Ashesh Shah / Mint

On Thursday, Satyam said it had modified the bidding process to introduce a second-round open auction to find a new owner if it receives bids that are within 90% of what the highest bidder quotes.

Spice Innovative’s board, which met on Saturday, decided to write to the Company Law Board (CLB) and former Supreme Court justice S.P. Barucha, who is supervising the bidding process.

“We are going to request justice Barucha to use his overruling powers over the Satyam board and ensure that the board adopts a complete transparency and open auction in the bidding process to choose a strategic investor for Satyam," Modi said. He said that he will urge Barucha to convene a meeting of both bidders and the Satyam board on the issue of adopting best practices in the bidding process.

Satyam’s government-appointed board is trying to find a strategic investor to buy a majority stake in the computer services company, which has been at the centre of India’s biggest corporate fraud since its founder B. Ramalinga Raju on 7 January confessed to fudging its accounts over several years.

Meanwhile, the Satyam board has decided to extend the deadline for submitting technical and financial bids to 13 April from the original date of 9 April because of three holidays in a row and also because additional information was sought by the bidders to enable them to prepare the bids.

On Saturday, Deepak Parekh, a member of the Satyam board, told PTI: “We met bidders yesterday (Friday) and they requested for an extension of the date. They wanted more information about the company and hence the extension." The board will supply them with the information “today or tomorrow", Parekh said. He added that “the name of the winner will be announced by 13 April".

Spice Innovative executive director Preethi Malhotra said her company still has time to take up due diligence—or an evaluation of assets and liabilities—and submit technical and financial bids if it decides to re-enter the bidding process.

India’s biggest engineering firm, Larsen and Toubro Ltd, and Tech Mahindra Ltd, the software services arm of the Mahindra Group, have confirmed their interest in acquiring Satyam. Two other entities—Hinduja Group and iGate Corp.—backed out.

In another development, Satyam, in the process of restating its accounts, has sought the CLB’s approval to publish its third-quarter results.

“We have written to the CLB on Q3 results and (are) awaiting their response. There is no timeline yet on the restatement of accounts," a company spokesperson told PTI.

Asked to comment on the exact employee strength of Satyam in the wake of reports of a staff exodus from the company, the official said: “Since the restatement of numbers and the bidding process are under way, Satyam is in a quiet period and we are not in a position to state numbers."

The restatement of Satyam’s accounts is expected to come in July as newly appointed audit firms will have to scrutinize the company’s numbers starting from 2002, according to a person in the company who didn’t want to be named.

A 30-member team from Chennai-based Brahmaiah and Co., appointed as internal auditor, is going through its accounts in Hyderabad.

Two foreign auditing firms— KPMG and Deloitte— have also been mandated by the Satyam board to scrutinize the firm’s books of accounts. The auditors have been asked to work backwards—2008-09 to 2002— to facilitate a speedy declaration of Q3 results, the company person said.