Thanks for Visiting Mint
You seem to have an Ad Blocker on. Please turn it off in order to continue, or whitelist Mint
HOW TO TURN OFF AD BLOCKER
OR
REFRESH IF YOU ALREADY TURNED OFF THE AD BLOCKER
Home >Companies >ITC willing to &#8216;join hands&#8217; with competing hotel firms

Kolkata: For the first time, ITC Ltd—the country’s biggest tobacco company which also runs hotels—told its shareholders that it was willing to integrate with itself the businesses of competing hotel companies such as EIH Ltd and Hotel Leela Venture Ltd in which it has acquired substantial equity interest.

The overture of “partnership" comes at a time when ITC is looking to aggressively expand its hotel business and has lined up an investment of around $2 billion, or close to Rs10,000 crore, to build new properties over the next 7-10 years. “We are hungry (for growth)," said ITC chairman Y.C. Deveshwar. 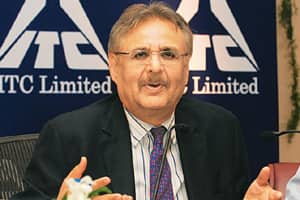 Partenship overture: Deveshwar says ITC isn’t interested in a hostile takeover, but the stake would come in handy if the firms decided to join. Indranil Bhoumik / Mint

Russell Credit also owns 14.1 million shares in Hotel Leela Venture—owner of the Leela hotels and resorts—which translates into a stake of 3.8%. The shares were acquired in fiscal 2009 for Rs31.18 crore, according to ITC’s annual report.

Addressing shareholders at the company’s annual general meeting in Kolkata on Friday, Deveshwar said, “We are not interested in hostile takeover… Sometime, if the other side wants to join hands with us, it (the stake) will come handy."

He has so far maintained that ITC invests its surplus cash “in areas that we have knowledge of"—he reiterated this on Friday. “These are very good investments…they have appreciated by Rs600-700 crore already," he said.

Deveshwar is a director of HT Media Ltd, which publishes Mint.

When contacted, EIH vice-chairman S.S. Mukherji said his company hadn’t received a firm proposal from ITC yet. “I cannot comment on what he (Deveshwar) told ITC’s shareholders. ITC has never approached us directly…we haven’t ever considered or discussed any partnership with ITC."

The management of Hotel Leela Venture wasn’t immediately available for comment. Calls made to its managing director Vivek Nair weren’t answered or returned.

Since ITC started acquiring shares of EIH in 2000, the latter’s promoters—the Delhi-based Oberoi family led by patriarch P.R.S. Oberoi—have ramped up their holding in the firm through so-called creeping acquisition, or purchase of shares from the open market. They currently hold 46.42%.

Asked what he meant by “partnership" with competing hotel companies, Deveshwar later told reporters: “The hotel business lends itself to separation of ownership of properties and marketing… We could, for instance, market hotels under a common umbrella."

ITC is looking to snap up unfinished hotel projects from cash-strapped real estate firms, too. “Lots of people were trying to develop hotels with borrowed money… A lot of dialogues (with developers) are going on," he added.

On organic growth plans, he said the firm had bought land across the country—in cities such as Bangalore, Hyderabad, Ahmedabad, Bhubaneswar, Coimbatore and Amritsar—to build new hotels. “We are currently negotiating for a piece of land in Gurgaon," he added.

Three years ago, Deveshwar had said the biggest problem facing ITC’s expansion plans was real estate prices. On Friday, he said the company was making full use of the downturn in the real estate market.

“Production peaked till May after which we had to suspend production at our factories for 15-20 days to introduce the new pictorial health warnings on our packets. So, production increased, but consumption didn’t," Deveshwar said. By the year-end, the firm was left with a stock of 9.3 billion sticks, 5.5 billion more than at the beginning of fiscal 2009.

ITC stopped producing non-filter cigarettes because of higher excise duties, and the decline in sales by volume during the year was largely on account of its exit from the segment, according to analysts.

The 23% rise in revenue from cigarette sales in the June quarter was also because of higher inventory in trade, but the growth may not be sustained in the quarters ahead.

ITC is still scouting for land in Gujarat, Andhra Pradesh and Madhya Pradesh to set up a new paper and paperboards manufacturing facility in which it could invest Rs4,000-5,000 crore.