The areaslumped together as a single cause in CSR Rulesgot Rs2,105 cr or 35% of all CSR spending

Bengaluru/New Delhi: Companies and sectors with the largest revenues and profits accounted for the highest corporate social responsibility (CSR) spending in the second year of CSR Rules. Increases in CSR spending are being fuelled by industries such as automotive, chemicals, infrastructure, construction and energy that have stepped up their game much more than other sectors.

Of a dozen sectors that were analysed by NextGen, a Bengaluru-based CSR management firm, energy, which includes some of the largest companies by revenue like Reliance Industries Ltd, Oil and Natural Gas Corp. Ltd and National Thermal Power Corp. Ltd, accounted for nearly 26% of the total CSR spending, as in the last fiscal year.

Individually, Reliance was the largest spender in FY16 too and it has spread its CSR funds across almost all the causes listed by the law. In FY16, it spent 2.3% of its profit, or ₹ 52 crore. Its spending on healthcare nearly halved to ₹ 314 crore in FY16, but on education, it jumped from ₹ 8 crore in FY15 to ₹ 15 crore in FY16, according to its annual report. “The amount spent on each of the focus areas varies on an annual basis depending on the scope of work for the year," said Jagannatha Kumar, chairman’s office, Reliance Industries. 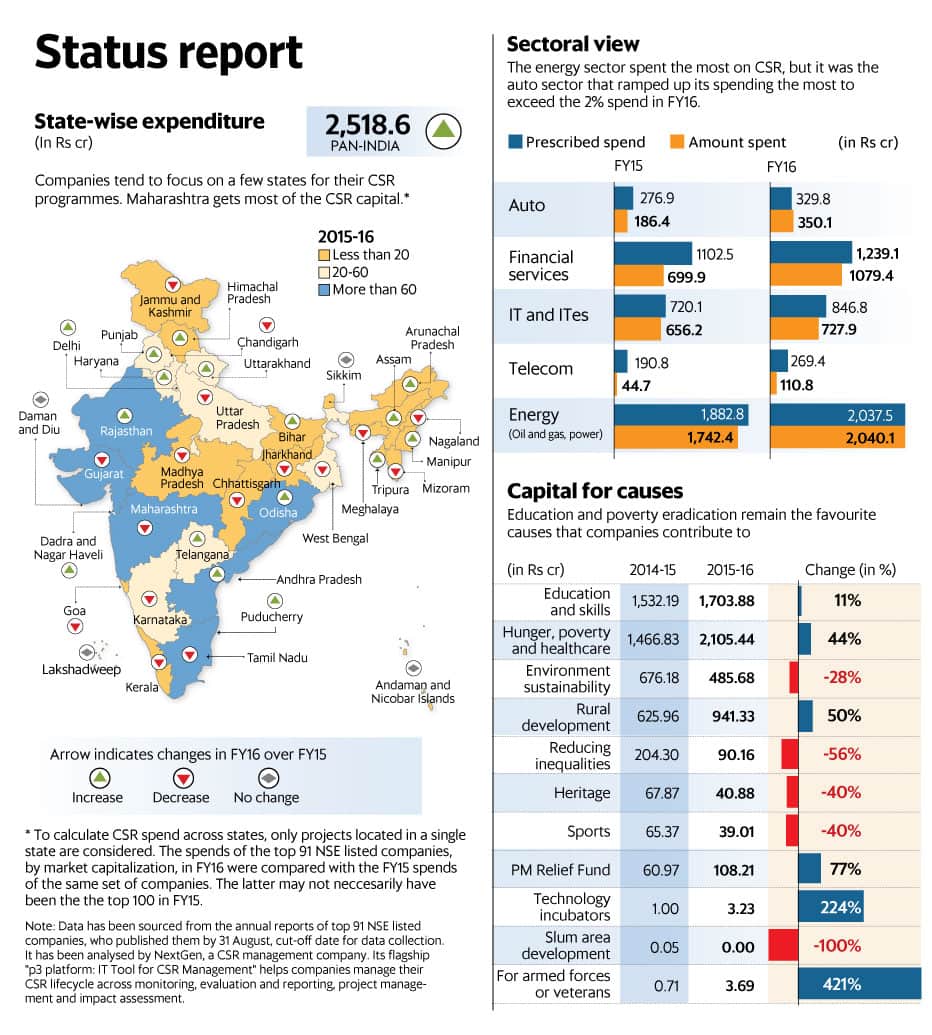 In FY16, the focus seems to have been on education as Reliance set up virtual classrooms called Jio schools in 96 schools in Andhra Pradesh and Gujarat, with the objective of improving the quality of teaching and learning outcomes.

The CSR law mandates all companies with a net worth of Rs500 crore or revenue of Rs1,000 crore or net profit of Rs5 crore to spend 2% of their average profit in the past three years on charity work.

Annual reports of the top 100 companies by market capitalization on the National Stock Exchange (NSE) were analysed by NextGen for 2014-15. For 2015-16, it studied the annual reports of 91 of the 100 companies that were available by 31 August, the cut-off date for accepting data. These 91 companies spent a total of Rs6,033 crore on CSR in FY16, compared to Rs4,760 crore spent by 100 companies in FY15.

“More and more companies are realizing that not meeting 2% makes them look bad, and for large companies, it can turn out be a reputational risk," said Abhishek Humbad, co-founder at NextGen. “As companies get more mature with their CSR strategy, they see the benefits of linking it to their business, so they don’t feel the pain of spending more than 2% on it."

“Manufacturing companies like automotive have been well poised to do CSR because they focus on communities around their plants and it helps build engagement with local communities. Also, many of them are working in skill development. These activities are great value for money as they are able to not only skill people but also create a local talent pool," said Parul Soni, global managing partner at Thinkthrough Consulting, a CSR consultancy.

The rules list 11 causes companies can channel their CSR spending into. And in FY16, much like in the previous year, companies largely stuck to education. But healthcare and eradicating poverty and hunger are also areas of focus thanks to an increase in spending by public sector companies. Twelve PSUs together spent Rs911.7 crore on this cause—they are lumped together in the CSR Rules—which is nearly three times more than their spending in this area in FY15. This cause in total got Rs2,105.4 crore, or 35% of all CSR spending in FY16. The other popular cause was education, which got 28.2% of all the funds. Rural development also emerged as a top cause, edging out environment, which was among the top three causes in FY15.

“Skills have been trendy. These causes have seen an increase because many of the skilling initiatives instead of being classified as an education initiative is being put under providing employment and reducing poverty. Also when it comes to healthcare, conducting blood donation camps is a popular way of doing CSR as it is easy and effective," points out Noshir Dadrawala, chief executive for Centre for Advancement of Philanthropy, a CSR consultancy.

On the other hand, Ravi Chellam, executive director, Greenpeace India, said that even though there is interest in environment, for most Indian companies, it is not a priority. “On environmental issues, companies seem to prefer to focus on either their own campuses or areas immediately surrounding their locations," he said, adding that their objectives are to reduce their carbon footprint, enable conservation of water, tree planting and in some cases setting up infrastructure for renewable energy.

As for rural development being among the top causes, Dadrawala says that last year’s drought was a reason.

While causes like slum development and veterans continue to be neglected, some causes actually saw a fall in spending from FY15. For instance, reducing inequalities as an area, which includes causes like women’s empowerment accounted for only 1.5% of the Rs6,033 crore that was spent by the top 91, while in FY15, companies spent 4.2% towards this cause.

“This is more an issue of categorization than a lack of spend as the CSR schedule seven areas (the 11 listed under the rules) are not mutually exclusive. For instance, building toilets for girls could be classified under sanitation and healthcare rather than reducing inequality. In reality, we see a pick-up in demand for women-related projects," said Humbad.

At IT services company Tech Mahindra Ltd, 50% of all CSR capital goes into empowering women and another 10% for the disabled, said Loveleen Kacker, chief executive officer of Tech Mahindra Foundation, the CSR arm of the firm. Of its total CSR spend of Rs46.9 crore, half went into removing gender inequality.

“We believe that any development can happen in any of the areas—from nutrition to sanitation, only when women are empowered. And we feel only economic empowerment of women can bring about social empowerment," said Kacker.

To do that, Tech Mahindra focuses on imparting vocational skills to nearly 50,000 women in 11 cities.

Interestingly, technology incubation saw more funding in FY16 than FY15 with spending nearly doubling to Rs3.2 crore, though this is less than 1% of the Rs6,033 crore that was spent on CSR in FY16.

The preferred geographical regions of spend have more or less remained the same. Maharashtra emerged as the biggest individual state beneficiary of the overall CSR corpus, with at least Rs571.40 crore being spent by 57 firms in FY16 compared to Rs671.31 crore spent by 61 firms in FY15.

With Mumbai acting as the headquarters to a majority of firms and the presence of a large number of manufacturing units across the state, Maharashtra emerges as the obvious choice for spending CSR funds.

“It is part of our policy to invest CSR funds in geographies in close proximity to our area of operation," said Vinod Kulkarni, head of CSR at Tata Motors Ltd. The firm spent Rs20.57 crore in FY16, of which around 70% is earmarked to be spent in a 20km radius around Tata Motors plants and areas of operations. “It amplifies the outcomes and impact," he added.

The reasons for firms to select geographies close to manufacturing plants or areas of work are valid but this leads to an imbalance in the division of CSR funding, said Arun Nagpal, co-founder of Mrida Group, a social business venture specializing in implementing CSR projects.

Apart from Maharashtra, the data also showed that CSR capital is concentrated in states that are already economically more developed than others, with 44 firms spending money in Tamil Nadu, 34 in Gujarat, 26 in Andhra Pradesh, 36 in Rajasthan and 40 in Karnataka. These states are among those with the highest gross state domestic product. Among the north-eastern states, Assam saw an increase in CSR investments with a total of Rs19.8 crore being spent on 28 projects by 15 firms. Other states such as Meghalaya, Manipur, Mizoram, Sikkim and Tripura saw negligible investments.

However, it is important to note that these are not clear-cut indicators of the rise or decline of investments in individual states as annual CSR reports do not always list individual CSR projects by location. In order to simplify, NextGen used some assumptions—projects with CSR spends in multiple states have not been considered for the calculation of ‘CSR spend across states’ and ‘number of projects across states’.