Home / Companies / People /  Subrata Roy: A year in custody
Back
Share Via

Subrata Roy: A year in custody

New Delhi: A year ago to the day, Sahara group chairman Subrata Roy walked into the Supreme Court of India.

He was there to clarify his non-appearance at a court hearing that had attracted the ire of the judges and resulted in the issue of an arrest warrant against him, and at a larger level, to make his case on payments due to investors.

Roy, his shirt stained with ink—minutes earlier, a lawyer had thrown ink at him—was calm as he proceeded to address the judges himself, something often seen in Bollywood movies, but rarely seen in courts.

His lawyers had had little luck with the judges, but Roy was sure he could convince them. They would see the merit in his proposals, he thought. 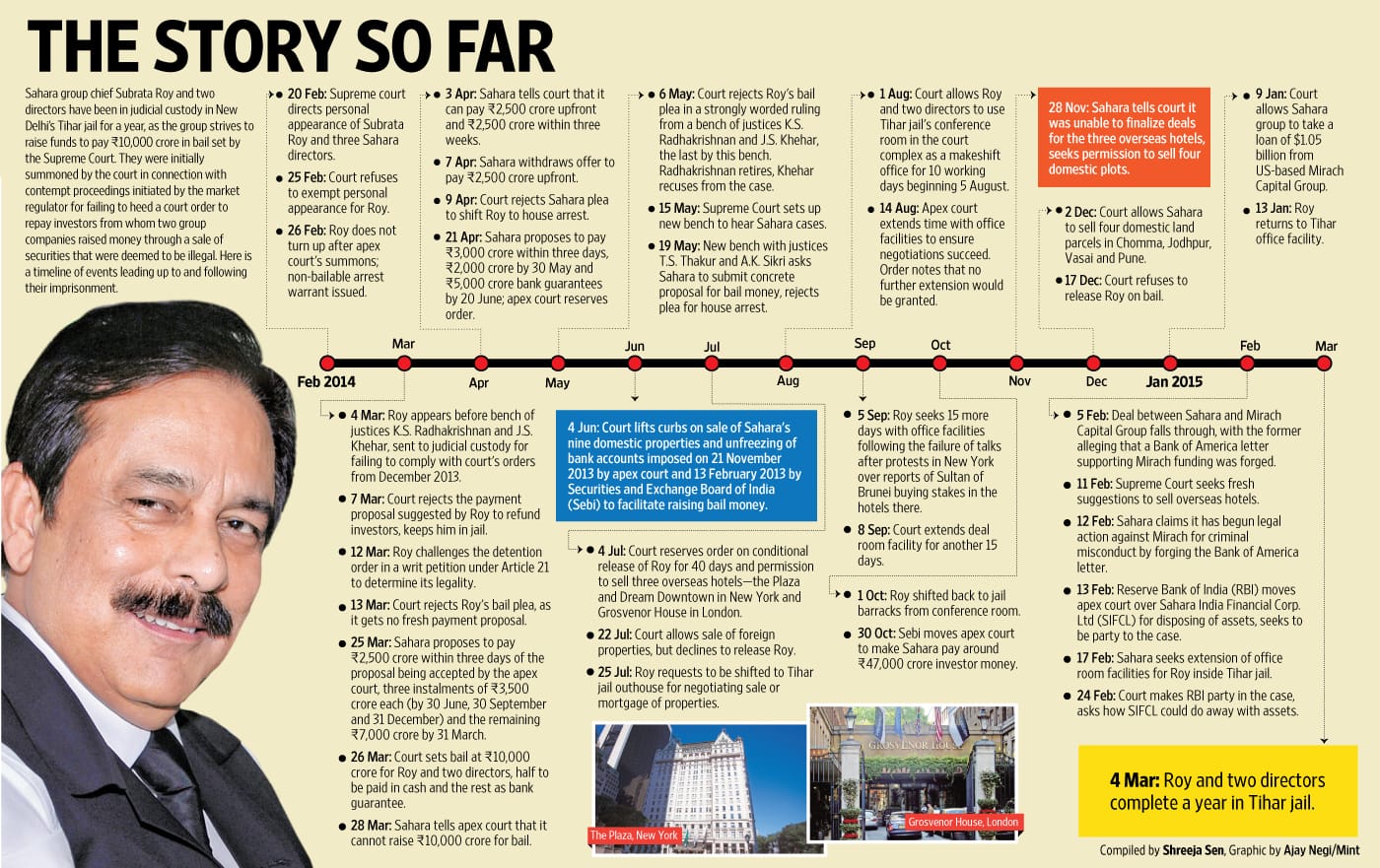 Roy and two other directors of the Sahara group were sent to Tihar Jail for contempt, having defaulted to honour on an undertaking given to Supreme Court to repay investors from whom two group companies had raised money through a sale of securities the market regulator had ruled illegal.

Three weeks later, on 26 March, the court would modify the order to include a ₹ 10,000 crore bail—to be paid half in cash and the rest through a bank guarantee.

A year later, Roy is still in jail.

It has been an eventful year—Sahara was allowed by the court to sell some of its assets to raise bail for Roy; the group struck a deal with a Florida-based company Mirach Capital Group Llc, incorporated in December 2014, to secure a $2 billion loan to pay bail but subsequently said the deal collapsed after it discovered that a Bank of America letter provided by Mirach guaranteeing the money had been forged.

And so, a year later, both Sahara and Roy find themselves in the same place.

Roy’s incarceration came after a bruising court battle with the Securities and Exchange Board of India (Sebi) over a bond sale by two Sahara companies that the court eventually ruled was illegal.

And then, in a surprising twist, it said all the bond holders had been repaid by then and that its total liabilities were only ₹ 2,610 crore, and that the amount it had paid Sebi more than covered it.

Both the court and Sebi have remarked on the felicity with which Sahara raised money from investors and then repaid them.

Indeed, on 4 March 2014, Justice K.S. Radhakrishnan, who was hearing the Sahara case, said: “We have doubts whether investors are there."

In June 2014, Sahara deposited a further ₹ 3,117 crore with Sebi, which has found it tough to identify the investors. The stock market regulator was given (literally) truckloads of information by Sahara, but some investors are identified by one name only and a location with no more details such as address or bank account.

By 30 September 2014, Sebi had received only 4,900 applications from bond holders for refunds. In December 2014, Sebi issued an advertisement asking bondholders to apply to it by 31 January this year.

A person familiar with the refund exercise said only ₹ 4 crore had been paid to investors so far. Even counting multiple account holders, only 10,000-12,000 investors are likely to get a refund amounting to ₹ 40-50 crore, this person said on condition of anonymity.

Prior to the order of arrest, came a series of strictures and warnings that did not bode well for Roy.

The judges noted on 4 March last year: “We have found that the contemnors have maintained an unreasonable stand throughout the proceedings before Sebi, SAT (Securities Appellate Tribunal), High Court and even before this Court. Reports/analysis filed by SEBI on 18.02.2014 make detailed reference to the submissions, documents, etc. furnished by the contemnors, which indicates that they are filing and making unacceptable statements and affidavits all through and even in the contempt proceedings."

The build-up had included fetters on Roy’s freedom of movement and travels abroad. In another charged court hearing, as most hearings have turned out to be in this case, the harried pleas of a senior lawyer to not impose such restrictions invoked little sympathy from the bench.

The lawyer’s repeated request that the bench look to the right of the courtroom—where journalists stood watching—and think of the next day’s headlines, failed to work.

On 13 February 2013, Sebi ordered a freeze on the bank accounts of SIRECL and SHICL, and their promoters and directors after being criticized by the apex court for delays in taking action against the group.

On 29 October 2013, the court directed SIRECL and SHICL to make available to the market regulator the title deeds of properties worth ₹ 20,000 crore within three weeks.

A series of proposals came from Sahara and were shot down by Sebi. Of particular interest was Sahara’s offer that the market regulator take over 100 acres of land in Versova, Mumbai, that it estimated was worth about ₹ 19,000 crore.

Sebi’s counsel, senior lawyer Arvind Datar, told the judges that he could not understand why Sahara had not done something worthwhile with such a valuable piece of property.

He then proceeded to inform the court that the 106 acres of land was in a “no development zone" and also surrounded by two creeks, which puts it in a “green zone". Also, as per government valuation, it was worth only about ₹ 118 crore. Additionally, Sahara had not handed over key documents including land registry papers.

Sahara has faced pressure from other quarters, The income tax department made a claim of ₹ 10,015 crore in July last year.

The Reserve Bank of India (RBI) has said a Sahara group company had flouted its order to not sell its assets, and channelled the proceeds to a partnership firm.

The case has not been easy on the judges either.

On 6 May last year, a bench of justices K.S. Radhakrishnan and J.S. Khehar said the “calculated psychological offensives and mind games" by litigants needed to be repulsed.

Radhakrishnan retired shortly thereafter and Khehar recused himself from the case, but not before saying: “It is apparent that not a hundred, but hundreds of judge hours, came to be spent in the instant single Sahara Group litigation, just at the hands of the Supreme Court... This abuse of the judicial process needs to be remedied."

Sahara group’s efforts to raise money to pay for Roy’s bail have been to no avail.

On 24 February, the Sahara group told the court that there were certain deals on the table at an “exploratory" stage. One potential transaction was with a European fund to lend $1.535 billion at an interest rate of 11.5%. A second possible transaction was with a Dutch pension fund, Rajeev Dhavan, lawyer for Roy, told the court. A third proposal centres on Aamby Valley, a township Sahara group is developing in Maharashtra.

The special bench with justices T.S. Thakur, Anil R. Dave and A.K. Sikri will hold the next hearing in the case on 13 March.

A year of incarceration has not seen significant movement on the dispute at the heart of the case.

“In my view, the Supreme Court should take upon itself the task of liquidating Sahara’s assets, only then some seriousness will come to the issue," said Ramesh Vaidyanathan, managing partner at Advaya Legal, a law firm.

“Subrata Roy’s incarceration has not helped in the sale of assets... The Supreme Court should appoint a merchant banker or an investment banker which can identify assets and sell them," Vaidyanathan said.

The case has, however, made companies more cautious about the way they go about raising money, according to Prithvi Haldea, founder-chairman of Prime Database, which tracks primary capital markets.

“For issuers it has raised a lot of concern and many strategies have been rethought," Haldea said. “With the powers Sebi exercises now, issuers have brought changes in their style of functioning. Another visible change is that the number of issuers has gone down," Haldea said.

Sahara has filed a defamation case in a Patna court against Mint’s editor and some reporters over the newspaper’s coverage of the company’s dispute with Sebi. Mint is contesting the case.