Lovely University | Cashing in on an opportunity

Lovely University | Cashing in on an opportunity

Phagwara / Jalandhar: The Mittal family that runs Lovely Professional University (LPU) cannot be faulted for lacking either upward mobility or the ability to sense a business opportunity.

Watch student Mandeep Jhaj, a farmer’s daughter who wants to land a corporate job, talk about the appeal that private universities such as Lovely hold for her

Starting out as halwais, or makers of traditional Indian sweets, the family acquired a Bajaj Auto Ltd scooter dealership in 1990 and graduated to selling Maruti Suzuki Ltd automobiles before it turned to education.

What the family conceived as a management institute in 1999 for 120 students has today become what it claims is India’s largest university by students on a single campus, just three years after winning the status of a full-fledged university in 2006.

Sprawled across 600 acres—the size of 316 football fields—along NH1 in Phagwara, Punjab, Lovely Professional says it has 24,000 students, half of whom it can fit in its own on-campus hostels, and a 1,500-strong faculty. The university has 10,000 seats on offer every year to its 150-plus programmes, ranging from business and hotel management to computer applications and commerce, films and fine arts to sciences and languages. 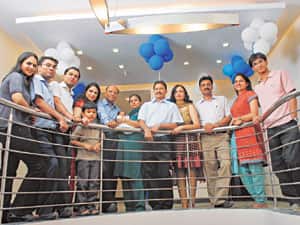 Learning curve: Members of the Mittal family, which runs Lovely Professional University, at their residence in Jalandhar, Punjab. Rajkumar / Mint

But Lovely Professional’s rapid growth is also proof of the boom in private education in a country where state-run institutions with limited seats and faculty are struggling to meet the ever-increasing demand from students. India is home to 540 million people in the school- and college-going age bracket, an opportunity the Mittals saw early.

Schweta Chauhan, an undergraduate student of fashion technology at Lovely Professional, belongs to Haridwar, the Hindu pilgrimage city in Uttarakhand.

“There was no course in fashion technology available near my home," said Chauhan, who pays Rs23,000 per semester as fees. A comparative programme in the older, New Delhi-based Pearl Academy of Fashion can cost Rs67,000 per semester.

Chauhan’s family can afford to pay for her education. Her father is a property dealer and a farmer.

“Most of the students here are on education loans," said Anil Madhyani, 19, an undergraduate student of computer science engineering, whose own education is being paid for by his father, a chartered accountant.

It is this dual market that Lovely Professional is tapping and the Mittals are profiting from—those with money but no opportunity to study in their hometowns and those who finance their university education with bank loans to give them a leg-up in the job market.

The Mittals, a joint family whose size rose to 17 with the arrival of a baby in May, still run two sweet shops and the automobile dealerships, all named Lovely. The three brothers, their children, and grandchildren live under one roof and share a kitchen.

Ashok Mittal, the youngest of the brothers, is chancellor of Lovely Professional and his wife Rashmi is the executive dean; Romesh Mittal’s son Aman looks after public relations and his wife Vani teaches undergraduates.

Romesh Mittal also liaises with government officials. Aman Mittal, 27, who zips around the campus in a Maruti SX4, says that his father spends most of his time meeting officials “just to be in touch with them".

In an interview, chancellor Ashok Mittal refused to discuss any financial details about the university, including investment.

A study, “Opportunities for Corporate India in Higher Education" by management consulting firm Technopak Advisors Pvt. Ltd, released in September, sheds some light on the magnitude of funds involved in setting up a university.

“Total investments required to set up a multidisciplinary private university covering an area of 300 acres are in the region of $300-$350 million (around Rs1,437-Rs1,677 crore)," said the study signed by Raghav Gupta and Luv Jasuja.. “This university would cater to 40,000 students. Ebita, or earnings before interest, tax and amortization, levels feasible in five to seven years would be 25-30% and return on invested capital would be in the range of 20-25%."

“Technically, the education sector is a ‘not-for-profit’ sector, especially so in K12 (kindergarten through class XII) and higher education segments in India," Jasuja, principal consultant at Technopak, said in a reply to emailed questions.

“The extract is based on what is being achieved in countries where education is allowed to run for profit."

One expert who has studied India’s education sector is surprised by how fast Lovely Professional has grown and suspects political patronage helped.

“My belief is that there has to be a huge political side to this," said Monica Mehta, a director of Kaizen Education Fund I, India’s first private equity fund being raised to focus on investment in education businesses.

“600 acres to purchase, then to build on it, operational costs, faculty, marketing. To ramp up to 24,000 students, huge amounts of infrastructure and marketing costs have gone into it. It is mind-boggling to think it happened over three years. They have definitely got something free upfront", said Mehta, whose research shows that a university takes a minimum of five years to break even and start delivering returns.

Mehta said Lovely had not received any outside funding from a private equity or venture capital fund.

A recent report by Chennai-based deal tracker Venture Intelligence recorded 30 such investments worth at least $300 million in education-related firms from early 2005.

Aman Mittal said the family has never been attached to any political party. “We have purchased the land," he said. “Banks have been generous to us," he added, when asked how the family had been able to set up the university and scale it up in such a short span. “They give loans to us when they see we are growing."

For the quality of education it imparts, Lovely Professional gets mixed endorsements from industry.

Engineering Admissions, a book which rates colleges and is brought out by online youth magazine Jam’s editor Rashmi Bansal, gave Lovely’s engineering programme a rating of B+ in 2008—good but with room for improvement.

Engineering and construction firm Punj Lloyd Ltd, listed on the university prospectus as a hirer, said it had not hired students from Lovely Professional in 2009 and 2008. Eli Lilly & Co. India Ltd, the Indian arm of the US drug maker, listed as another recruiter, said it hired from the university through on-campus recruitment. “It is essentially done for our sales positions from LPU’s pharmacy college," said a spokesman.

Kamal Sharma graduated from a programme in medical laboratory technology from Lovely Professional in 2007. Sharma, a resident of Chandigarh whose father and brother are in the police, lived in the campus hostel for two years. He said he found the quality of teaching in his programme to be poor and the teachers changed often.

Sharma said he had always wanted an MBA degree, but did not seek admission in Lovely University, preferring instead to join a programme at Amity University’s Mohali campus. “They still have to cement their place," Sharma said about Lovely Professional.

Some experts are concerned about the number of students the university is admitting. “Their intake is very high," said Premchand Palety, a Mint columnist who also partners with Mint for college rankings. “This is a phenomenon of new universities".

The university has 13,000 students in engineering (all years) with 3,000 in the electronics branch alone. A typical Indian Institute of Technology, or IIT, has 1,500 students in all. A large body of students can mean a dilution in teaching standards. Palety said.

Teaching standards is something Lovely Professional claims to be doing something about, telling the media in a recent press release about the 165 IITians it has hired as faculty this year in a placement season hit by the slowdown, resulting in fewer job offers with lower pay.

One student of IIT-Madras, K. Adalarasu, a research scholar, said he asked Lovely Professional to extend the joining date so that he could complete his research. Adalarasu said he planned to join by December. “(Given) the present economic situation, I expect most people to join," said Adalarasu, commenting on his peers. He said on-campus job offers from the software industry this year barely touched a take-home salary of Rs30,000 per month for B.Tech students, but Lovely had offered Rs35-40,000. Adalarasu, who has previous experience of teaching in engineering colleges, was offered a take home pay of Rs65,000 per month.

Lovely Professional is monitoring these young teachers, and their teaching methods, through cameras in classrooms, said Palety. The college defends the use of cameras in class.

Aman Mittal said cameras in classrooms were meant to record all lectures to upload them on the college website and for security. “When a teacher knows what he is teaching is being recorded, he delivers the lecture in the best possible way".

The Mittal family recalls its tough early days. Romesh Mittal says he dropped out of school to help his father run the sweets shop. When the family applied for a Bajaj dealership, the application was rejected initially because the company was surprised that a halwaai wanted to run an auto dealership.

The Mittals submitted a plan to start a college with 60 seats in MBA (master of business administration) and 60 in MCA (master of computer applications) in 1999 to the All India Council of Technical Education (AICTE), the regulator of higher education in India, but were denied permission.

Ashok Mittal, the chancellor, said the AICTE took a long time to give the initial sanction, but the family did not take recourse to paying bribes. “We were advised by some other colleges that we should try to do it that way," he said.

The Mittals met AICTE officials and got a denial of permission reversed in 2001. It took three years of lobbying with government officials and politicians to get the status of a private university.

The family history has kept them grounded, according to Romesh Mittal, who recently switched to a BMW while his brother moved on to a Mercedes.