Wipro's M&A strategy, overseen by Rishad Premji, is the most aggressive among home-grown IT firms, and can become a template for TCS and Sikka's Infosys

Wipro Ltd, for now, is lagging behind Infosys Ltd in growth. Still, when it comes to mergers and acquisitions (M&As) and investments in start-ups made by the two rivals over the last two years, Infosys Ltd’s boss Vishal Sikka may want to look at Wipro’s playbook, overseen by chief strategy officer Rishad Premji.

Over the last year, Infosys, surprisingly, has shied away from buyouts, despite spending $390 million to purchase three firms in the first year of Sikka’s tenure (see chart). 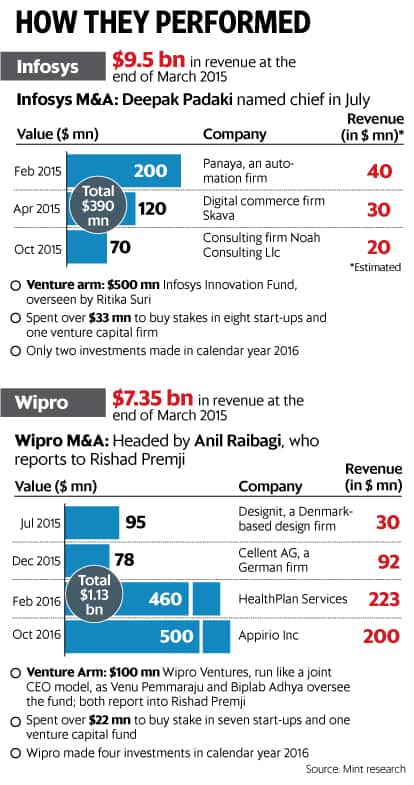 Finally, the pace of investments in start-ups made by Infosys has slowed; the firm has made only two investments since January. Infosys has spent some $33 million (out of its $500 million fund to invest in start-ups) to buy stakes in eight start-ups and an undisclosed amount in Vertex Ventures, a Palo Alto-based venture capital firm. Seven of these investments were made in 2015.

M&A is an important theme for Infosys as the management expects $1.5 billion in new revenue from buyouts as part of Sikka’s ambitious target of hitting $20 billion in revenue by March 2021. The three buyouts made by Infosys, for now, are estimated to bring less than $90 million in revenue.

Wipro’s strategy is the most aggressive among home-grown IT firms, and can become a template for both Tata Consultancy Services Ltd (TCS) and Infosys, its bigger rivals, in how to better deploy cash and also invest in areas which can make outsourcing companies future-ready.

Wipro, in the last 18 months (since April last year, when Neemuchwala joined the company as chief operating officer), has spent over $1.13 billion in making four buyouts which, in addition to making the firm future-ready, together bring in over $550 million in revenue. TCS boss N. Chandrasekaran has not made a single buyout or an investment in start-ups in the last two years.

“Wipro has done a better job of M&A than most IT services firms to date," said Ray Wang, founder of Constellation Research, a technology research and advisory firm. “They (Wipro) have been more deliberate whereas Accenture has been very aggressive, although the net results are the same. Wipro has got new service mixes and capabilities along with new clients. One aspect is the emphasis of taking company cultural considerations into play."

Wang said that it appears that “Infosys has slowed down M&As and venture activities". Infosys maintains that it continues to evaluate firms and start-ups and there is no slowdown in decision-making.

“I’m very focused that every business unit should not have more than one acquisition to integrate and digest," Neemuchwala told Mint last week, explaining that M&As will bring in a “significant" share of revenue in Wipro’s ambition of becoming a $15 billion firm by 2020.

Wipro has spent over $22 million (of a $100 million fund) in picking minority stakes in seven start-ups and a venture fund.

Sikka’s and Rishad Premji’s style of running their M&A and venture arms is also different, as none of Infosys’s executives, including Suri (who oversees Infosys Innovation Fund), have any experience in the venture capital space. In contrast, Wipro’s venture arm is run by Venu Pemmaraju, a former senior investment manager at Intel Capital, and company executive Biplab Adhya, who both report to Rishad Premji.

One of the biggest benefits Wipro has accrued from its buyouts is that it has managed to retain the tag of India’s third largest software services firm, leaving HCL Technologies Ltd to be content at the fourth position.

Wipro does not spell out the growth brought in from its four buyouts and the organic growth, but a senior executive conceded that the growth in core IT services has “considerably slowed down". If Wipro manages to grow at the upper end of its 2% growth forecast in the fourth quarter, it will add $445.3 million in incremental revenue in calendar year 2016. The four buyouts are estimated to have accounted for at least $350 million in new business, translating to about 78% of all new business.