Jet Airways says the airline will raise 3,500 crore within six months and save 2,000 crore in costs

Mumbai: Cash-strapped Jet Airways (India) Ltd has informed lenders that it will raise about ₹ 3,500 crore over the next six months through a stake sale in its loyalty programme and infusion of fresh funds into the company. The airline has also told lenders it will shave off costs by as much as ₹ 2,000 crore over the next two years. This will, however, be subject to strengthening of the rupee against the dollar and a fall in crude oil prices, which, analysts said, were unlikely in the near term.

Responding to the concerns raised by its overseas lenders, Jet Airways’ chief executive, Vinay Dube, in a letter said that in case the airline failed to infuse funds through the stake sale in JetPrivilege and equity infusion by 31 March, it would make efforts to obtain a bridge loan from investors, a person with direct knowledge of the matter said, requesting anonymity.

The airline has also promised to maintain a minimum revenue threshold of $700 million per quarter, apart from opting for “manpower rationalisation" and “productivity improvement" measures, Dube wrote in the mail, said the person cited above.

Dube was allaying concerns of a group of lenders led by Mashreq Bank PSC, which had expressed its intent to expedite the repayment of loans worth about $185 million, amid the worsening financial condition of Jet Airways. A letter on behalf of the lenders was sent by Dubai-based Mashreq Bank to Jet Airways on Monday, seeking a detailed response by 24 September. 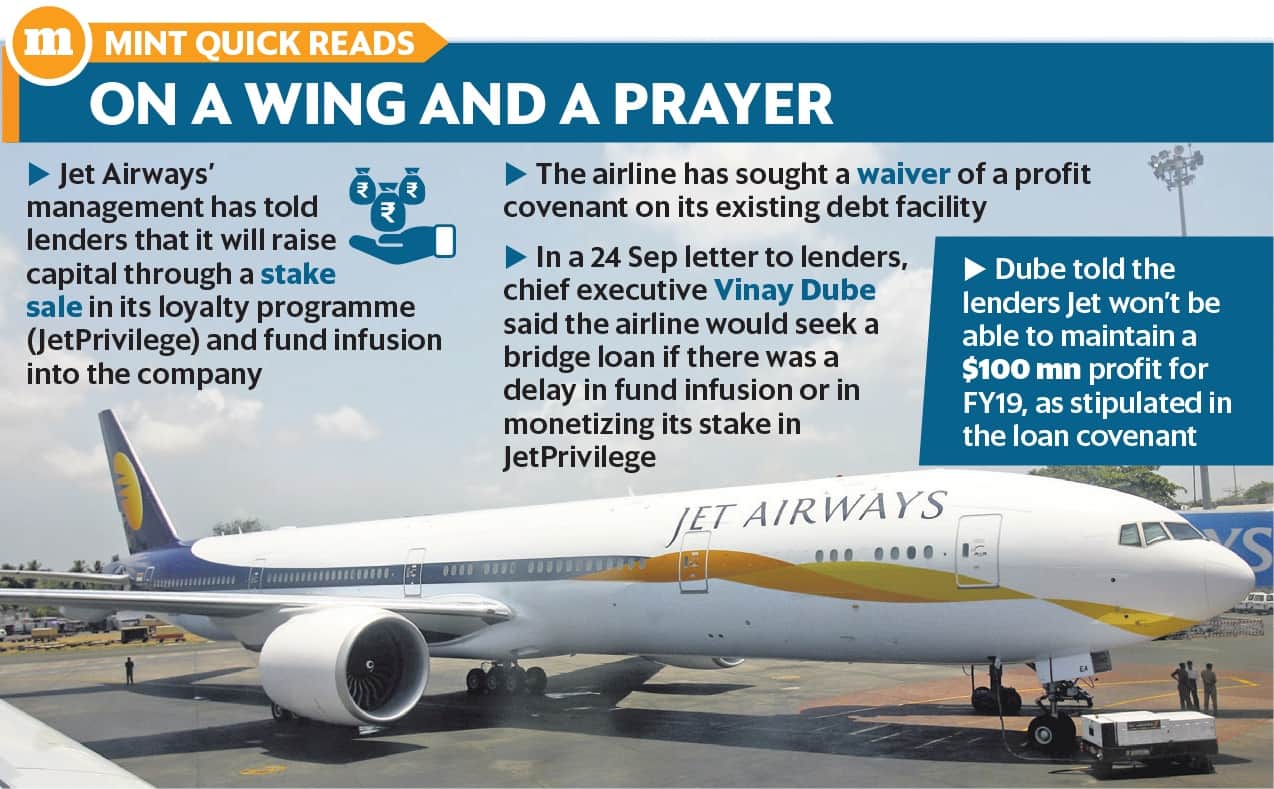 Dube has also sought a waiver of the profit covenant on its existing bank facility, citing rising crude oil prices and a depreciating rupee.

He emphasized that the airline would not be able to maintain a profit of $100 million in FY19, as stipulated in the loan covenant, since the profit covenant was premised on Brent at $45 a barrel and a rupee exchange rate at ₹ 66.7 to a dollar, which are not the case any more.

Jet Airways informed the lenders that worsening macroeconomic conditions were beyond the company’s control and the profitability targets, as per the covenant with the lenders, are likely to be missed, the person cited earlier said.

Covenants are conditions put in place by lenders to protect themselves from defaults by borrowers. Lenders may recall a loan, seize assets or slap penalties in case the borrower violates a loan covenant.

To be sure, any decline in crude oil prices is unlikely, given shrinking supplies from Iran and Venezuela and a slowdown of growth in US shale oil production. Prospects of the rupee strengthening against the dollar are dim.

Analysts at Kotak Institutional Equities, in a 26 September report, said they expect Brent crude at around $80 per barrel in the current fiscal and moderate only from 2019-20 onwards.

Dube told the lenders that Jet took a hit of ₹ 1,041 crore in the last two quarters due to rising fuel prices and had to make a mark to market adjustment of about ₹ 500 crore due to a depreciating rupee, said the person cited earlier.

“It will be difficult for Jet Airways to generate $700 million in revenue, a quarter, in the upcoming quarters, as July-September quarter is considered a lean quarter for travel," an analyst tracking the aviation sector said on condition of anonymity. “In the current scenario, the airline can’t raise its fares significantly due to pricing pressures in the market."

“Also, Jet Airways’ valuation of JPPL (JetPrivilege Pvt Ltd) at an enterprise value of $1.3 billion is on the higher side. I expect Jet Airways to make about ₹ 2,000-2,500 crore by selling its stake in JPPL," the analyst added. Jet Airways owns 49.9% stake in JPPL while Etihad holds 50.1%.