Bengaluru: Wipro Ltd reported first-quarter earnings and sales that missed analysts estimates and offered a lacklustre forecast, indicating that faster growth to match its larger rivals will take longer than what many investors had estimated.

Chief executive officer Abidali Neemuchwala, the man Wipro hired last year from Tata Consultancy Services Ltd (TCS) to boost growth, conceded that it will take at least three more quarters for some of the steps he has taken to bear fruit.

The TCS veteran is particularly looking to boost Wipro’s ability to get more business from existing clients and become more profitable at a time when Indian information technology (IT) firms across the board are struggling to grow.

“You got to wait for at least three quarters to see the improvement. You need to have three dots to draw a line. So we have started on a note and we should gradually see the benefits," said Neemuchwala in an interview after the company reported its earnings on Tuesday. 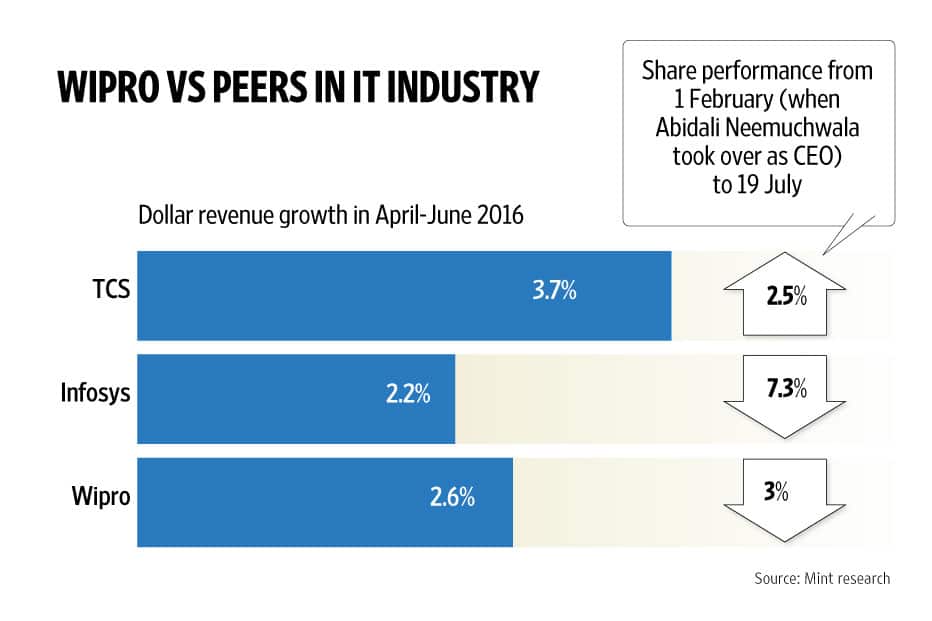 The biggest challenge ahead of Wipro is to arrest declining profitability, as the company’s operating margin narrowed to 17.8% from 19.7% at the end of March quarter.

Unlike Infosys and Cognizant Technology Solutions Corp., which give an annual earnings forecast, Wipro only gives quarterly revenue growth outlook. Wipro’s management now expects the company to at-best report a 1% growth in constant-currency terms in the fiscal second quarter, slower than the company’s growth guidance of between 1.5% and 3.5% in July-September period last year.

Bengaluru-based Wipro reported 1.1% sequential growth in April-June 2015, even as the company reported 3.7% growth last year to end with $7.35 billion in revenue at the end of March 2016.

Wipro’s weak start to the financial year mirrors that of its two larger rivals, TCS and Infosys, which last week reported 3.7% and 2.2% dollar revenue growth respectively in the April-June first quarter from the preceding three months.

“Reading the commentary and the guidance for the second quarter, it does not look like Wipro will be turning the corner anytime soon," said a Mumbai-based analyst at a domestic brokerage. “Further decline in profitability cannot be ruled out as the management has said it is making some investments. There is obviously pricing pressure. And the company’s acquisitions does not seem to be adding to incremental revenue growth either."

The analyst, who declined to be named, expects the company to “continue to underperform" this year.

Analysts at Emkay Research pointed out that Wipro’s earnings before interest and tax margin has slipped by about 230 basis points, marking five straight quarters of decline.

In the last year, Wipro spent more than $630 million in buying three companies which together have $345 million in revenue, which translates into a growth of 4% from the buyouts, provided it is able to integrate them well.

At the heart of Wipro’s underperformance is the company’s inability to generate more business from existing clients, especially its top 10 clients which account for about 17.6% of total revenue.

Since September 2014, Wipro’s quarterly revenue has increased by 6.23% to $1.88 billion. However, during this time, Wipro’s top clients have done less business with the company.

The oil and gas business is another pain point for the company. The division, which accounted for 16.2% of its revenue until March-end last year, now constitutes only 13.2% of its revenue. Declining global crude prices have led to many oil firms putting their new technology spending plans on ice.

Like TCS, Wipro too for the first time disclosed revenue from its digital business, which includes cloud computing platforms, analytics and consultancy practice.

Wipro classifies about 17.9% of revenue or $345.6 million as digital technologies. Mint first reported on Wipro’s plan to report digital revenue on 2 May. TCS claims its digital business grew 53.2% over 2014-15 to become a $2.28 billion business last year.

Nasscom, nonetheless, expects software exports for the country’s $150 billion technology outsourcing sector to grow between 10% and 12% in constant-currency terms.

In the quarter to June, Wipro’s business improved 4.5% in the US, which brings 53.5% of total business, but declined 2.5% in India and the Middle East, which accounts for 10.4% of revenue.

The company added 50 new clients in the first quarter, taking the total number of customers to 1,208. It had added 119 clients in the January-March period.

Wipro’s attrition rate spiked to 16.5% at the end of the fiscal first quarter from 16.1% at the end of March. The management explained that historically, the April-June quarter has seen more employees leave the firm.

Neemuchwala also tried to assuage fears of weakness in demand for Wipro’s services to companies in the UK after Britain voted last month to leave the European Union, saying that for now, it is business as usual.