New Delhi: With Lok Sabha elections due by May 2019, the GST Council is set to further ease the compliance burden for small businesses at its meeting later this month. The GST Council, chaired by union finance minister Arun Jaitley, will consider raising the sales threshold for compulsory GST registration from ₹ 20 lakh to anywhere between ₹ 50 lakh and ₹ 75 lakh, one person privy to the development said on condition of anonymity. A GST Council meeting is likely to be convened by mid-January to consider the proposal that is based on the experience gained since the tax reform was implemented in July 2017.

Prime Minister Narendra Modi, in an interview to news agency ANI on Tuesday, said the central government wanted the threshold to be raised to ₹ 75 lakh. He added that the centre also proposed to cut the GST rate on under-construction flats from 12% to 5%. The proposals would be placed before the GST Council as soon as a state ministers’ panel gave a report on the subject, he said.

At its last meeting on 22 December, the GST Council had decided to let a ministerial panel review the revenue threshold for GST registration, tax rate on under-construction flats and the feasibility of a concessional tax scheme for small service providers.

Modi on Tuesday said that the government was aware of the hardships faced by small and medium enterprises (SMEs). “Whatever difficulties faced by MSMEs that comes to our notice, are placed before GST Council. Our resolve is to simplify GST and give benefits to consumers. The process of simplifying and rationalizing GST will continue," he said. 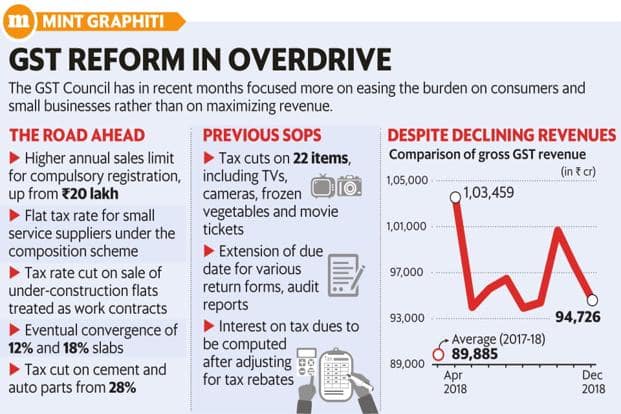 The goods and services tax (GST) has reduced tax burden on a large number of commodities, Modi said. “We are committed to hearing all issues being faced by people and placing them in front of the GST Council. GST has to be simple and consumer-friendly. Work is constantly going on in this direction."

The move to raise the threshold for GST registration is significant considering that small businesses have been hit by the November 2016 demonetisation move, business disruption in the early days of GST implementation and a credit squeeze in recent months.

The idea of raising the bar for compulsory registration comes in the wake of experience that many small firms with sales below ₹ 20 lakh have signed up for GST in order to be part of the value chain, which is important for retaining large customers. Also, the revenue loss from raising the sales threshold may not be significant. A second person privy to the discussions within the council said the revenue impact from a higher threshold of ₹ 50-75 lakh could be ₹ 800-1,400 crore. So far, all big GST relief given to SMEs was based on the premise that the bulk of the tax receipts comes from large taxpayers.

However, the advantage of a low sales threshold for GST registration is that it helps in formalization of a part of the economy that otherwise remains without registration for indirect tax or for labour welfare schemes under the Employees’ Provident Fund Organisation (EPFO). The ₹ 20 lakh threshold helped bring a large number of small businesses into the GST net as the tax exemption limit prior to 1 July 2017 for central excise duty was ₹ 1.5 crore in annual sales.

The tax reform has helped the number of indirect taxpayers increase by 3.4 million, according to the Economic Survey 2017-18. A higher threshold may open the window for some of those taxpayers to go out of registration although those finding merit in remaining part of the system will stay.

“While there is a need to simplify GST further for SMEs and an enhanced threshold may be a step in that direction, it needs to be borne in mind that the taxpayers base gets expanded with a lower threshold," said M.S. Mani, partner at Deloitte India.