Japanese truck maker Isuzu Motors Ltd, which has partnered Swaraj Mazda Ltd, is firming up plans to launch its 41-seater low-floor luxury bus in select markets in India in March, making it the first Japanese company to produce buses in this segment in India as public transport gets more upscale and international players queue up for a slice of the pie.

According to a vendor, who is supplying parts to the bus, they will initially roll out the buses in Andhra Pradesh and Gujarat. 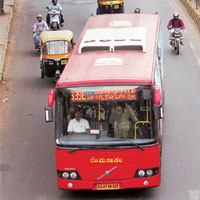 “In the first year, the plans are to sell around 1,500 buses and scale up in the second year," this person said..

Company executives remained unavailable for comment and did not respond to calls over two days.

Swaraj Mazda and partner Isuzu join the line-up of global heavyweights that have in the last couple of years announced plans to tap the growing market for new generation buses in the country.

Rapid economic development, an ageing fleet of public transport buses and the sharp rise in population across the country’s large cities has meant that existing public transport infrastructure is grossly overused and inadequate.

The Union government has now embarked on a programme to modernize the public transport infrastructure, an important part of which will be replacing the existing buses that ply on Indian roads and introducing bus rapid transit systems in various metros.

Work is now on by the National Highways Authority of India to modernize the country’s arterial roads and connect the entire length and breadth of the country with a network of 13,146km of four-lane and six-lane highways.

In the race for urban transportation orders, India’s largest commercial vehicle manufacturer, Tata Motors Ltd, is already at the head of the pack with a joint venture with Marcopolo SA of Brazil. The company has already received the first order for 500 new-generation buses from the Delhi Transport Corporation as it modernizes and strengthens its fleet strength ahead of the Commonwealth Games that commence in the Capital in 2010.

German auto manufacturer Daimler AG has entered into a partnership with Jalandhar, Punjab-based bus body builder Sutlej Motors Ltd to make buses beginning this year. Sweden’s Volvo AB, whose Indian subsidiary is the leader in the luxury coach segment, has set up its own bus body manufacturing plant with local partner Jaico Automobiles at Bangalore, with a capacity to manufacture 1,000 buses annually. India’s bus market is currently estimated at 50,000 units per annum.