Kolkata: An engineering company that manufactures components for the railways, the G.P. Goenka-controlled Stone India Ltd, on Wednesday announced it was entering the logistics business through a technical collaboration with US-based RailRunner NA Inc. 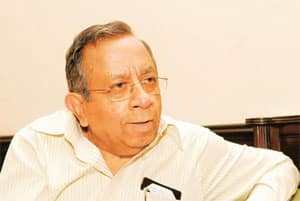 New technology: Stone India chairman G.P. Goenka says the freight cars manufactured by the firm will be capable of running both on roads and railway tracks and will revolutionize freight movement. Indranil Bhoumik / Mint

“This will revolutionize freight movement in India," said Goenka. “But I don’t expect miracles within a year." The launch of these freight cars would substantially reduce shipment time and costs, he added.

“Whereas a train can carry up to 45 conventional container carriers at a time, RailRunner’s technology makes it possible for a train to carry up to 50 containers," said Amitava Mondal, Stone India’s managing director and chief executive officer. “Also, because the weight of these freight cars is only 11 tonnes as opposed to 18-20 tonnes of conventional container carriers, running these is going to be far more fuel-efficient."

Stone India and RailRunner started discussing a tie-up in January last year. Initially, the latter was keen on taking an equity interest in the venture, but Goenka said he persuaded RailRunner to agree in the end to a fee-based technical collaboration.