SoftBank CEO Masayoshi Son has been writing bigger cheques than in the past to consolidate its hold over the Indian market. MintAsia examines the investor's India strategy

Mumbai/Bengaluru: Billionaire Masayoshi Son, founder and chief executive officer of SoftBank Group Corp., has for a while now made it his business to bet on the future. That’s probably why a downturn of the kind that is currently in session in India’s technology start-up market doesn’t ruffle him. In an interview in December, during a brief visit to New Delhi, he said, “There are good times and bad times but SoftBank is always there."

In the nine months since his visit, SoftBank has put more than $4 billion to work in the Indian market. That takes the Japanese telecom and media conglomerate’s investments in start-ups in India to more than $6 billion in less than three years. Out of the $4 billion that has been committed this year, more than half will be cornered by Bengaluru-based e-commerce firm Flipkart. SoftBank struck a deal last month to buy a 20% stake in Flipkart for an estimated $2.6 billion. About $1.4 billion is expected to go directly into Flipkart’s coffers. The remainder will be used to buy stakes from some of the company’s existing investors. New York-based Tiger Global Management LLC and venture capital firm Accel Partners are said to be among the sellers.

Earlier, in May, SoftBank bought a 20% stake in New Delhi-based One97 Communications Pvt. Ltd, owner of payments platform Paytm, for $1.4 billion. The deal involved a $400-million payout for early investor SAIF Partners’s stake in the company. Paytm founder Vijay Shekhar Sharma also cashed in some of his shares as part of the deal. The investment spree continued into this month when SoftBank joined Sunil Munjal’s Hero Enterprises to infuse $250 million into Gurugram-based budget stays aggregator OYO (Oravel Stays Pvt. Ltd). The company’s other existing investors, venture capital firms Sequoia Capital India, Lightspeed Venture Partners and Greenoaks Capital Partners LLC participated in the round.

While Flipkart and Paytm are new investments for SoftBank, it returns as an investor in OYO. It had last invested in the firm in August 2016, bringing in about $62 million. It had entered the company exactly a year earlier when it joined OYO’s existing investors Sequoia, Lightspeed and Greenoaks to lead a $100-million funding round in the then less than two-year-old company.

With the latest salvo of investments, Son is clearly sending out the message that India, despite recent setbacks, remains an extremely important market for SoftBank. Further, it is willing to write even bigger cheques than it has in the past to consolidate its hold over the market. What isn’t quite so evident yet is how it plans to execute that strategy without repeating the mistakes from the past.

“In 2015 our chairman and CEO committed to a goal of a minimum $10 billion investment in ten years. Given our pace of commitments, we expect to hit this schedule well ahead of schedule," a SoftBank spokesperson said in response to queries from MintAsia. 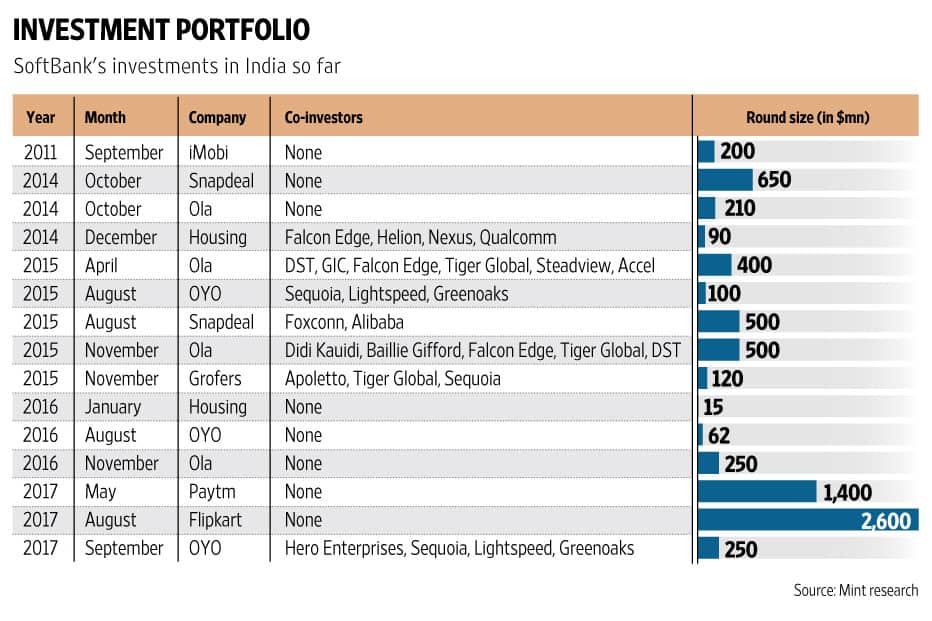 If the strategy at the time was to muscle into the best available assets, peak valuations be damned, it worked. Within just 12 months, Arora succeeded in bringing SoftBank abreast with Tiger Global, the largest and most influential investor in the technology start-up market in India for nearly a decade. Along the way, it also contributed to driving up valuations further in an already overheated market.

Snapdeal, which competed with Flipkart, Tiger Global’s single largest investment in India at an estimated $1 billion, saw its valuation vault to $2 billion with SoftBank’s investment. Ola’s valuation jumped three times to more than $600 million. Housing, a two-and-a-half-year-old firm when SoftBank led a $90 million round, was valued at more than $200 million, courtesy the premium paid by its new benefactor.

“Go in, go big and crush the competition with capital… that seemed to have been the strategy. It isn’t fair to assign all blame to Nikesh (Nikesh Arora). Masa (Masayoshi Son) is known to be aggressive when he wants what he wants," says a venture capitalist in Bengaluru whose firm is a co-investor in some SoftBank-backed companies in India. The person didn’t want to be named.

But the strategy backfired when the market slipped into a downturn somewhere in the last quarter of 2015. Hedge funds and other non-traditional start-up investors, Tiger Global among them, pulled back. The flight of global capital meant that either SoftBank itself would have to pony up most of follow-on capital that portfolio companies would need in the months ahead or the companies would have to lower their valuations to attract new investors. The implosion of Snapdeal early this year is perhaps the best example of the India strategy gone horribly wrong. SoftBank will very likely have to write off its estimated $900 million investment in the company after a bid to merge it with Flipkart fell through last month. Snapdeal, valued at $6.5 billion at its peak, is a shadow of its former self.

“I don’t think they (SoftBank) understood the Indian market very well. If they had taken the time to do that, started off with moderate deal ticket sizes, they could have had a more meaningful impact on the later-stage start-up funding market," says a venture capitalist with a homegrown firm based in Mumbai.

The current environment in India’s start-up market offers SoftBank the perfect opportunity to right the wrongs from the past. Valuations continue to be under pressure across the board. The number of serious rivals to contend with at the deal table remains significantly low. And entrepreneurs have become more rational about how they want to scale their businesses.

“When SoftBank came in three years ago, its timing was off by maybe 1-2 years. That’s not the case now. In a lot of ways, this is the ideal environment for a strategic (investor) like SoftBank to build a solid presence," says another Mumbai-based venture capitalist who leads the India investments for one of Silicon Valley’s top rung firms. This person didn’t want to be named.

But here’s the problem. SoftBank has never really behaved like a strategic investor. In fact, in its scale and pace of investments, here it has often behaved almost like a hedge fund. Despite the depth of strategic and operational experience it possesses within the organization, by most accounts, it has not really brought that expertise to bear in its portfolio firms.

“The investments here are mostly managed remotely… interaction between the portfolio companies and SoftBank is minimal," said a former senior executive at a SoftBank-backed company on the condition of anonymity. “There is a fair bit of interaction with the founders (of portfolio firms) but not much more beyond that," said another former senior executive at a second SoftBank-backed firm. Both didn’t want to be named.

The launch of its global technology investment vehicle, the $100-billion Vision Fund, takes it further away from its strategic identity. The fund raised $93 billion of the target $100 billion corpus in May this year from a slew of global investors such as Apple Inc., the Public Investment Fund of the Kingdom of Saudi Arabia, Foxconn Technology Group, Qualcomm Inc. and Sharp Corp.

SoftBank’s own commitment to the fund is about $28 billion. The fund intends to write out cheques worth $100 million at the minimum for stakes in public and private companies across technology verticals such as the Internet of Things, artificial intelligence, mobile applications, telecoms, cloud technologies and software, consumer Internet and, financial technology.

“The Vision Fund will invest through minority stake, majority stakes and public equity investments of $100 million or more. If a future investment in India meets this criteria then it will likely come through the Vision Fund," the spokesperson added

With that much more money at its disposal, it is hard to see how SoftBank’s strategy is going to be any more different from what it has been in the past. In India, the $2.6-billion investment it is making in Flipkart is from the Vision Fund. So is the $250-million round it led in OYO this month. What is clear though is that with the launch of the Vision Fund, big-ticket investments, not just in India, are going to become a priority for SoftBank. Paytm is a Softbank Group Corp investment that pre-dates the Vision Fund, the SoftBank spokesperson said.

“I’m not sure what their investment strategy is… they’ve clearly made so many mistakes here. And even recent investments like Flipkart will be tough to make money from because they are all very late-stage investments. Can Flipkart go from $12 billion (valuation) to $20-25 billion in the next three-to-four years? That’s the main question. Or can Paytm go to $12-15 billion from $7 billion?" says yet another venture capitalist whose firm is a co-investor in a SoftBank-backed company.

Son himself has a rather utopian view of the future as he sees it through the Vision Fund. “SoftBank is aiming not just at one technology, one business model, one brand to drive the world. No. We want to form a coalition of like-minded people, comrades, entrepreneurs… we want to form a group, everyone to work together to create a revolution," he told stakeholders at SoftBank World 2017, an annual conference, in July.

It’s going to be easier said than done.