Auto maker Volkswagen India Pvt. Ltd will launch at least two small cars in the Rs5 lakh segment in India in the next three-four years, one of which is likely to be the Up! concept car that was unveiled recently, and the other a model from group company Skoda Auto India Pvt. Ltd. 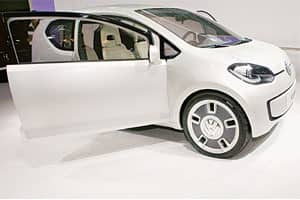 Top-down strategy: The Up! concept car. Volkswagen will have products ranging from the luxury Phaeton to the compact car Fabia in India.

“This is the segment that is seeing a very big growth and we are now working out a small car strategy so that we are present in the fastest growing segment," said Joerg Mueller, president and managing director of Volkswagen India. “The car will be under 4m in length," he added, declining to provide further details.

The company’s new 110,000-unit-a-year plant coming up at Chakan, near Pune, will have a flexible assembly line to make a range of cars from across the group’s various models, he said.

Some 20,000 units of group company Skoda’s Fabia model (also in the Rs5 lakh segment), currently made at its Aurangabad plant, will be produced from Chakan from mid-2009.

From 2010, the company will build a car based around the popular Polo model — a hatchback in petrol and diesel versions—from Chakan that will be priced at around €7,000 (Rs4.36 lakh), Mueller said.

Volkswagen AG has invested Rs3,500 crore in India to set up the new plant, which makes it the largest German investment in the country, Mueller said.

The group will, however, follow a top-down strategy for the Indian market, and will have products ranging from the luxury Phaeton and the middle-segment Jetta to the compact car Fabia.

“India is a huge strategic market for us and we will work towards having a product in every segment using a mix of imported completely built-ups, assembling here or manufacturing locally," he said.

Meanwhile, the company has finalized plans to build a vendor park for its suppliers in India at its 575-acre campus at Chakan. Volkswagen is looking for a local partner to construct the facility that will allow its vendors to be close to the production facility.

The group has already identified the components it would like to procure from Indian vendors for its global supply chain. These include tyres, sheet-metal parts, small-pressed parts, and plastics.

“Last year, we made some 6.2 million cars globally, and Indian vendors who fit the quality requirements have the opportunity to be part of our growth in future," Mueller added.