Microsoft co-founder Paul Allen is fighting poachers with the help of sensors, drones and luxury resorts

New York: If he has his way, Paul Allen will have 90,000 square miles (234,000 sq. km) of African territory covered with smart sensors and drones by the end of this year to bring hyper-connectivity to Africa’s remotest, most wildlife-packed corners. It’s the biggest conservation tech project to date: a command-and-control system for rangers to record and respond to poaching threats, from Kenya to Tanzania.

Allen’s Domain Awareness System (DAS), a project he is funding through his company Vulcan Inc., is as simple in concept as it is complex in execution. It’s unsexy in the most fundamental of ways—and yet it’s the likely key to one of sexiest philanthropic causes of our time.

The basic idea: studying endangered animals’ movements in order to get ahead of poachers on a scale that allows Big Data to predict threats across entire regions.

For years, local rangers have protected wildlife with boots on the ground and sheer determination: armed guards spending days and nights surrounding elephant herds and horned rhinos, on the lookout for rogue trespassers. 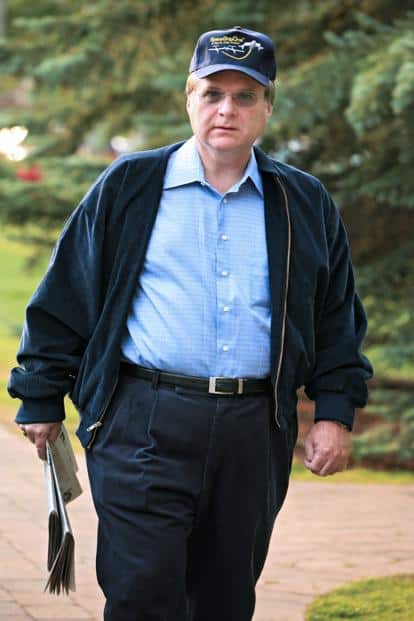 Allen’s DAS uses technology to go the distance that humans cannot. It relies on three funnels of information: ranger radios, animal tracker tags, and a variety of environmental sensors such as camera traps and satellites. This being the product of the world’s 10th-richest software developer, it sends everything back to a centralized computer system, which projects specific threats onto a map of the monitored region, displayed on large screens in a closed circuit-like security room.

For instance, if a poacher were to break through a geofence sensor set up by a ranger in a highly-trafficked poaching corridor, an icon of a rifle would flag the threat alongside any micro-chipped elephants and radio-carrying rangers in the vicinity.

Think of DAS as similar to a comprehensive camera system in Vegas casinos, with park managers replacing pit bosses on the hunt for cheats and camo-sporting rangers in place of the security guards that flank blackjack tables. Except in this case, when alerts strike, managers aren’t preventing the haemorrhage of a couple hundred thousand dollars; they’re dispatching help to save one of 352,271 estimated remaining elephants, or one of 30,000 surviving rhinoceroses.

“By nature, I am attracted to tough problems—problems that, by definition, require innovative and dramatic solutions," said Allen from his office in Seattle, where his philanthropic company, Vulcan, is based. “(The DAS project) is the ideal combination of two of my interests—technology and the preservation of (the savannah elephant,) one of Africa’s most iconic species."

DAS was first put into the wild in October 2016, when Ted Schmitt, lead program manager at Vulcan, and his team deployed the technology at the Lewa Conservancy, a 55,000-acre preserve in Kenya. Then it was brought to Odzala National Park, founded in 1935 and one of Africa’s oldest national parks in the Republic of Congo. Six other African conservation sites in partnership with Save the Elephants, African Parks Network, and Wildlife Conservation Society soon followed.

But its most high-profile partner is Singita, the network of standard-setting luxury safari lodges run by conservation guru Luke Bailes. If DAS is the unsexiest player in this space, Singita is the very sexiest—it has properties in the Serengeti, in Tanzania, and Kruger National Park in South Africa—and the lodges have the most sumptuous design, the largest wine collection, and often the highest price tag among its competitive set.

DAS was installed at the five-lodge Singita Grumeti reserve in March, using sensors to illuminate a key corridor for poachers intent on crossing to the neighbouring Serengeti. Bailes calls the system a “revelation and a game changer". He said the “layered approach of technology and boots on the ground enables Singita Grumeti to significantly enhance its effectiveness in dealing with poaching".

Part of the success is Vulcan’s holistic approach: Schmitt’s team developed the software and provided capital for equipment and hardware, and they’ve also invested in training, technical input, support, setup, mentoring and guidance. Though the partnership is just two months old, “the impact has been significant", said Bailes.

The Elephant in the Room

According to Schmitt, DAS happened almost by accident. In January 2014, the Vulcan team had been dispatched to Kasane, Botswana, to help kick off the first pan-African elephant census in more than 40 years. “We had all of the best and most famous scientists that do wildlife research and census-taking come together, trying to address a common problem," he said.

The issue: how to survey hundreds of thousands of square miles in order to get an accurate idea as to how many elephants are still living and how many have died? Ultimately, the group decided to systematically fly in grid-like patterns over 17 African countries, carefully threading and weaving above the continent, photographing herds and carcasses, and counting the old-fashioned way.

There was talk of using drones, but the area’s scope was too large for the battery-powered devices, and researchers feared the technology wasn’t consistent enough. The situation was too urgent for any technological mishaps, said Schmitt.

In the end, his team came away with two major insights. First, the population of savannah elephants has declined by 30% in the last seven years, primarily due to ivory poaching. Second, having tons of data on elephant poaching is useless unless conservationists can make sense of it in real time. It’s precisely the type of nut that Schmitt and Allen live to crack.

Schmitt’s first instinct was to harness as much data as possible, casting a wide net across the African savannah. “But what a lot of (park managers) were telling us was that they were already overwhelmed by the information they had. They couldn’t use it effectively," he said. What they needed was a way to aggregate and visualize data. They needed software.

“All of the tools that are out there are designed for the military," said Schmitt. “They’re very expensive, for highly trained individuals, and not suited to the wildlife and conservation domains." Rangers were instead using a decades-old system.

Building DAS took about 12 months and the partnership of many on-the-ground organizations who gave feedback. Threats differ by location, it turns out: In Tanzania, wildlife snares and bush-meat hunters are a big problem, while ivory poaching is a more common issue in Kenya. Then there are less malicious issues, such as bush fires, or a cow that has wandered from a local farm to big game predators.

Schmitt and his team designed a system capable of recognizing all these factors. Some can be reported by rangers over radio; others can be picked up by seismic sensors, satellites, drones, camera traps and speed detectors.

“With every type of enforcement, the most urgent task is figuring out where the bad guys are," said Allen. “You might have the best people and equipment money can buy, but unless you know where to direct your response, you’re essentially powerless. The intel this system provides will help conservancies use their limited resources much more effectively."

Early Results and Next Steps

It will take two to five years to get real measurements from conservationists, but the feedback for DAS has been promising already. Though no animals have yet been saved as a direct result of DAS, rangers in two separate cases were able to use DAS alerts to intercept poachers who had already made a kill.

Poachers are not the only significant threat to wildlife in Africa. The system has helped rangers in Kenya prevent human-wildlife conflict by spelling out which farms’ cattle are most likely to roam into conservation areas. By working with locals to rein in the livestock, rangers can prevent retaliatory killings by farmers that happen when, say, a lion preys on that wandering cow.

Bailes’s Singita is just one glowing report card of several. “The area managers we’ve been working with feel that this is a game changer," said Schmitt. “They know they’ve needed something like this. And they’re pretty no-nonsense—they’ll kick something out quickly if it’s not useful."

What’s been surprising to the Vulcan team is how DAS has unified conservationists who had previously been focused only on their individual reserves. “All of these groups are now sharing best practices with each other, more now than they ever had been. They’d all been doing the best they can in their regions, but stepping back and exchanging information has proved to have tremendous value in itself," said Schmitt.

The next hurdle is bringing connectivity to places that still don’t have it, such as the jungles and forests of Congo. Enhancing connectivity where it exists but is low will also be key; it’s what will allow DAS to show alerts in real-time (rather than on a delay). Then, Schmitt said, comes the exciting part: “Once you have more and better data, you get to this place where we have real expertise. Where you can ask, ‘How do you analyse data and call up patterns and proactively identify threats?’"

If Big Data is step one, machine learning is the very big step two. Bloomberg