India among best places to be a rich CEO

If your dream is just to be richer than society, South Africa and India are great places to be a CEO

New York: If your life’s goal is to be a highly paid chief executive officer, the US is the place. But if your dream is just to be richer than society, South Africa and India are great bets too.

In either case, probably best to avoid Thailand, Poland and China.

A Bloomberg ranking of CEO compensation at companies filling benchmark indexes in 25 of the world’s largest economies shows the biggest paychecks — by far — are written in the US Heads of S&P 500 businesses get pay packages averaging $16.9 million, about 2.6 times more than what their counterparts reap abroad. In second-place Switzerland, CEOs get 1.6 times the average.

In China, pay is 90% below the average — at least based on disclosures by companies in the Shanghai Shenzhen CSI 300 Index. They typically report annual compensation of about $640,000. But heads of state-owned companies, for example, enjoy valuable perks including housing and entertainment that sometimes go unmentioned in filings. 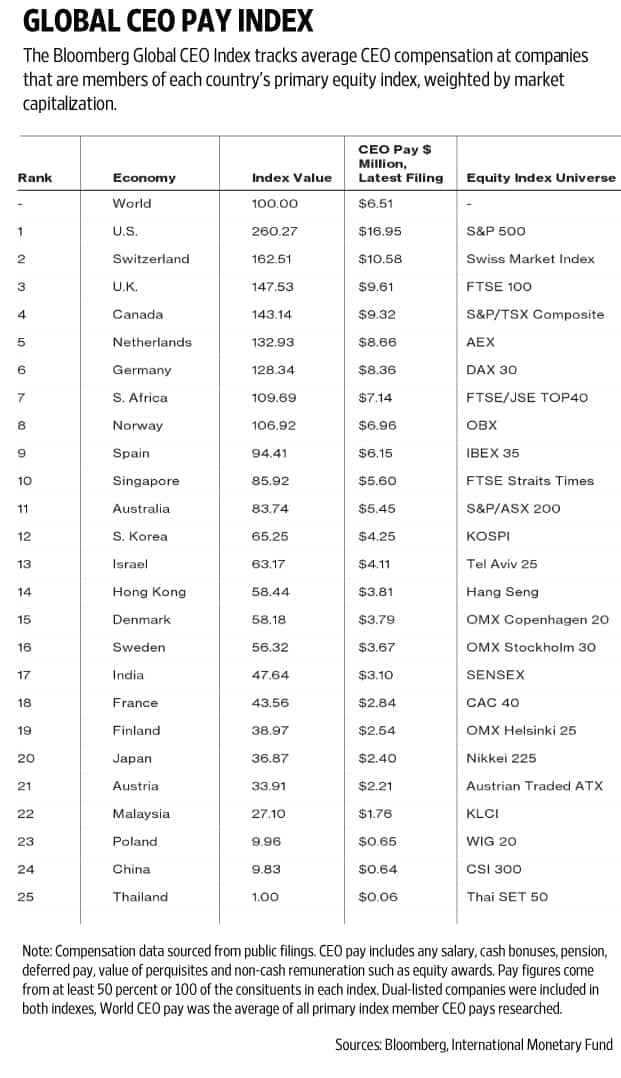 The deck gets shuffled a bit in a second Bloomberg ranking, comparing CEO pay to estimated income generated per person — a rough gauge of what chiefs get relative to the society where their companies are listed. That puts pay for CEOs in South Africa and India ahead of the US.

There are myriad reasons behind the international disparities in packages.

One of most important is size. The US is home to many of the world’s largest publicly traded corporations. 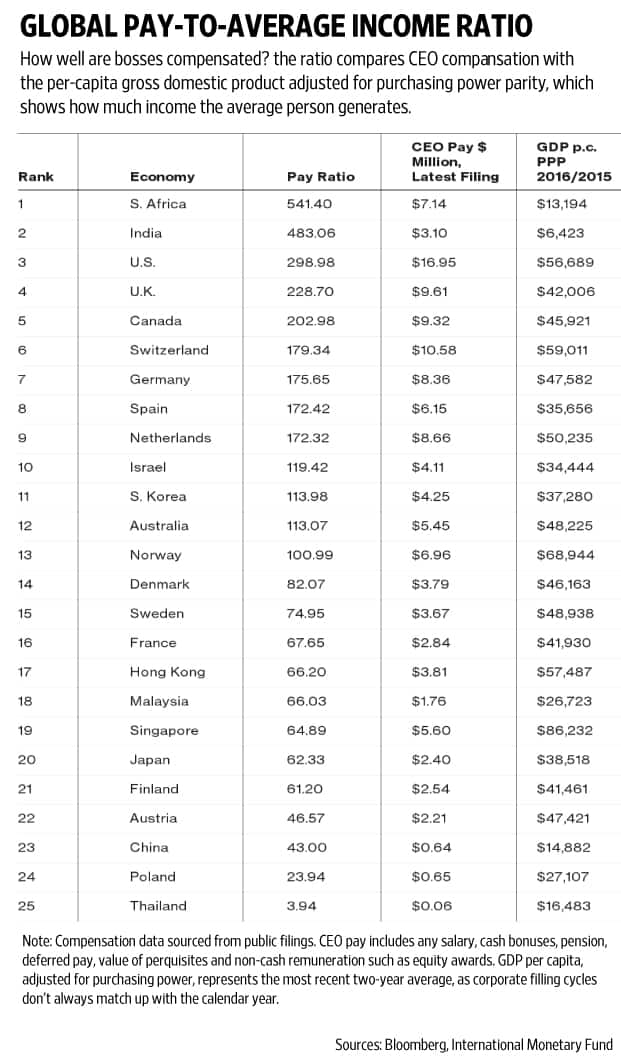 Cost of living explains some of it, too. It’s much more expensive to live lavishly in North America and Western Europe than in places like Thailand, where CEOs take home roughly $60,000 — less than in every other nation ranked.

In other cases, it’s cultural. In Japan, big paychecks are typically taboo because they’re considered a sign of greed.

And taxes and regulations matter.

Pay for top US executives has climbed quickly since the 1990s as boards increasingly used equity to reward bosses, letting companies take tax deductions for compensation linked to performance. Directors at global companies are under pressure from both investors who don’t want to see bosses get rewarded if stocks don’t go up, and executives who compare their paychecks with more highly-paid colleagues overseas.

In some places, growing pay levels have stoked the debate over income inequality, triggering a public backlash. Companies in countries including the UK and Spain now hold binding shareholder votes on executive pay every third year. The European Union moved in 2013 to limit performance-based awards at banks.

In the US, businesses will at least be required to disclose more, comparing a CEO’s pay with the median worker’s starting in 2017. President-elect Donald Trump has vowed to issue a temporary moratorium on new regulations that aren’t “compelled by Congress or public safety."

Such comparisons aren’t simple. Bloomberg’s ranking of CEO pay against earnings across society bases income generated per person on gross domestic product per capita, adjusted for purchase-price parity. It’s not a perfect measure: GDP measures just the value of goods and services produced, not how they were distributed.

The figures show that CEOs in South Africa and India take home more than the estimated income generated by an average worker — out-earning their American colleagues on a relative basis.

Each country’s compensation figure is based on the average CEO pay package for companies in one major stock index, weighted by market capitalization. The pay, disclosed in public filings, includes any salary, bonuses, value of perquisites and non-cash pay such as equity awards, deferred-compensation programs and pensions. Bloomberg