The rise and rise of Blackstone in India

Blackstone Group has strengthened its real estate investment portfolio in India and is set to cross the $5 billion mark across different asset classes including office, shopping malls and residential properties

Last week, it signed a definitive agreement with Indiabulls Real Estate Ltd to buy a 50% stake in the latter’s prime office assets in Mumbai for around $730 million. 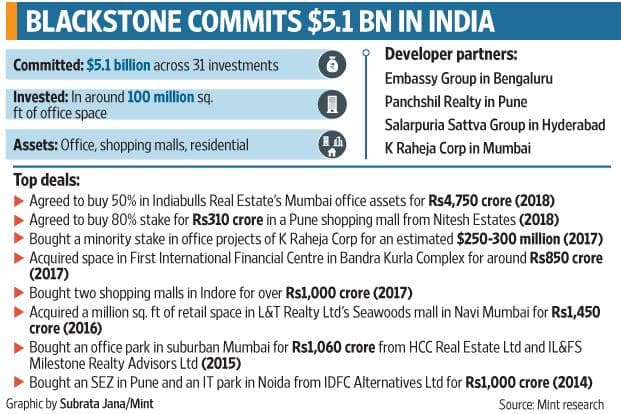 Once the deal is concluded by March-end, Blackstone’s real estate arm would have committed $5.1 billion across 30 real estate investments, of which $3.7 billion is in office space spanning 100 million sq. ft, consolidating its top position as the country’s largest office space investor.

In 2018, Blackstone is also set to buy an 80% majority stake in Nitesh Hub, a shopping mall in Koregaon Park, Pune from real estate firm Nitesh Estates Ltd for around Rs310 crore.

“Blackstone’s patience in waiting for the right investment opportunities, its focus on completed office assets and choosing the right developer partners have been its key strengths," said Ramesh Nair, chief executive and country head at property advisory JLL India.

The New York-based investor opened its real estate division in India in 2007 and signed its first transaction in 2008, when it bought a minority stake in management firm Synergy Property Development Services Pvt. Ltd.

It started buying office assets only in 2011, when not many investors were interested in the prime rental asset class.

Blackstone declined to comment on its India portfolio and strategy.

Jitu Virwani, chairman and managing director, Embassy Group, one of Blackstone’s first developer partners here, said Blackstone has deep understanding of the real estate business in India, including the approval process and other legalities.

In July 2017, Embassy Office Parks real estate investment trust (REIT) was registered with the Securities and Exchange Board of India (Sebi), making it the first such realty trust in the country to be accorded registration by the market regulator. The draft red herring prospectus is expected be filed before May-end.

“The REIT will see Blackstone stepping in as a sponsor and will see them monetising part of their commercial portfolio and realizing its value," Virwani said.

Embassy Office Parks, which includes Embassy Manyata Business Park and Embassy GolfLinks in Bengaluru, is an investment partnership between Embassy Group and Blackstone, along with other stakeholders. Globally, Blackstone has around $115 billion of assets under management and in February, Ken Caplan and Kathleen McCarthy were named as global co-heads of real estate. Senior managing partner Tuhin Parikh has built the firm’s real estate investment portfolio in India from the start. From building an office asset base, Blackstone started buying shopping malls in 2015 and set up its India subsidiary Nexus Malls in 2016 to own and manage the malls here.

Despite the ongoing slowdown in the residential sector, the commercial real estate space has seen unabated interest from marque global investors.

JLL India in February estimated that net absorption of office space to cross 100 million sq. ft by end of 2020 in the top eight cities of India.

“The office space market has been experiencing robust demand trends which will be fructified in the next 2 -3 years keeping the office leasing activities buoyant and in an upward movement," it said.

In commercial real estate, Blackstone has faced competition from Singapore’s sovereign wealth fund GIC Pte. Ltd, with both of them often vying for the same deals.

According to analyst estimates, GIC has invested more than $3.5 billion in office, residential and shopping malls. In a single investment, last year, promoters of DLF sold their 33.34% stake in its rental arm to GIC for around Rs8,900 crore.

“The key different between GIC and Blackstone would be the operational expertise of the latter and the strong partnerships it has forged," said an investor, requesting not to be named.

“Blackstone was clearly an early mover which saw the potential in commercial real estate ahead of its time. What now needs to be seen is how well they monetise these assets. But investments by the likes of Blackstone have sent out the message loud and clear to other global investors that investing in India is a long haul and one needs to be patient and focused," said Shashank Jain, partner, transaction services, PwC India.