The three—Sanjay Rishi, president of American Express for South Asia; Gautham Mukkavilli, a former PepsiCo India president; and Suresh Senapaty, a former chief financial officer of Wipro—were restrained from freely accessing their bank accounts as part of an ongoing investigation by the ministry of corporate affairs. 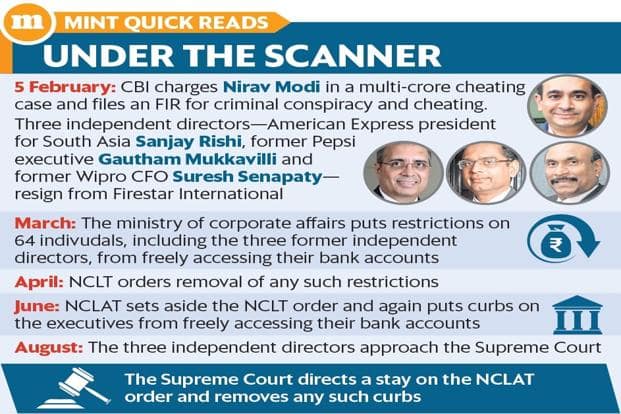 Unlike Modi, who has fled the country—hopping across three continents, from the US to Macau, and now having taken refuge in the UK—the three former directors had to deal with severe restrictions on their assets, pending an investigation into the $4 billion Punjab National Bank scam.

Last month, the Supreme Court offered a temporary reprieve to the three former independent directors of Firestar International Ltd, a privately-held firm controlled by Modi, as the apex court put a stay on an earlier order of the National Company Law Appellate Tribunal (NCLAT) that had restricted the three executives from drawing more than ₹ 1 lakh a month.

However, the agony for the three individuals is still far from over as the investigation continues.

“It’s been six months and still the investigation is far from over. So, we don’t know what will be the outcome after more FIRs (first information reports) are filed. For now, the Supreme Court has stayed the NCLAT order," said a lawyer of one of the independent directors, adding that the investigative agencies believe that money was paid to buy the silence of independent directors.

The three former directors did not respond to emailed questionnaires sent by Mint.

The three independent directors contested this directive before the Mumbai bench of the National Company Law Tribunal (NCLT), which ordered the removal of any such restrictions. However, an appellate tribunal set aside the NCLT order, which eventually made Rishi, Mukkavilli and Senapaty challenge the decision before the Supreme Court in August.