Dreaming up the next blockbuster product

Dreaming up the next blockbuster product

Stepping inside the innovation centre of the world’s largest consumer goods company in suburban Bangalore, anticipation runs high: How does the $78.9 billion (Rs 3.65 trillion) Procter and Gamble Co. (P&G), maker of Tide detergent and Pampers diapers, come up with its next blockbuster product? How big is the innovation funnel that has spewed out products ranging from paper towels to dentrifice to loads of over-the-counter brands? Inside the fifth floor of Neil Rao Towers at Whitefield, a thin veil of disappointment descends when all that comes to view is a bunch of P&G products neatly displayed in the hallway, and later, deliberately arranged in the conference room.

But as Ashish Chatterjee, head of the Bangalore Innovation Center (BIC) at P&G, starts talking about some of the 200 brands the company sells, and how it immerses itself into the lives of consumers, it dawns that the consumer business is far from being a pedestrian affair.

What should be the optimum force needed for twisting open a bottle cap? What’s the right pressure for the plunger on a bottle of skincare cream? Why should the black box that a lotion comes in be replaced with transparent packaging, as with Olay Total Effects and other Olay products? These and many such questions dominate researchers’ work as they drive “purpose-inspired innovation" at P&G.

“It’s certainly not an aircraft engine; we don’t always go for the big bang," says Chatterjee. “Our innovation is driven by consumer inspiration."

He sums it up as two moments of truth: one, when the consumer browses in a store and ends up buying a P&G product; second, when the person returns to buy either the same or any other item made by the company.

Defined by these moments of truth, BIC was set up in July 2008 as one of the 28 innovation centres within P&G. It is a capability hub, smaller than some of P&G’s mega centres, and provides modelling and open innovation resources for the global enterprise.

It was in 2000 that the connect and develop, or C+D, concept of open innovation was mooted by the then chief executive Alan G. Lafley. It wasn’t the best of times for P&G: the stock had just lost half its value amid an aggressive growth plan and Lafley decided to shift focus to research and development for infrastructure for open innovation. He directed that ideas and innovations sourced from outside should go up from 10% to 50% in the next five years.

A decade later, the company has far exceeded that limit. It has also changed tack—from getting the world to its lab to taking its labs to the world. For each of its 100 engineers and scientists working in Bangalore, the centre collaborates with five researchers outside. 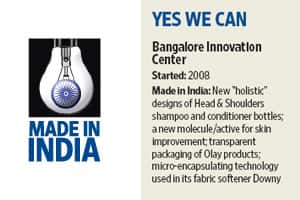 Now, at two-year-old BIC, there are a few tangible results, says Chatterjee, who is also director, Asia C+D and Bangalore Beauty Care.

Using computer modelling, this centre has screened millions of molecules to identify a new molecule in the area of skin improvement.

While it’s into clinical studies now, Chatterjee emphasizes that in such studies, knowing “how it works" rather than “why it works" is more important so that the molecule can be used in other skin applications as well. The computing expertise of BIC, which Chatterjee likens to “Intel inside", powers the P&G innovation engine, but isn’t visible from outside. “We use it (modelling) for scale and productivity," he says.

From simulating entire packaging lines to complete plant production units, modelling is used to reduce the start-up cost, eliminate waste in the system and to optimize existing operations.

A new multi-category production system, designed at BIC, has just been rolled out, which Chatterjee says will save “several millions of dollars for P&G". In this industry, there’s no such thing as a cost that can’t be cut.

As economic recovery has been slow in many parts of the world and consumers are still hurting, premium brands continue to struggle. Meanwhile, in India, where the $24 billion consumer packaged goods industry is growing at 12% per annum according to research and survey firm Nielsen, P&G lags behind its closest rival, Unilever Plc, in market share.

Though some of the BIC-designed packaging, such as of Olay Total Effects and Olay Regenerist, have been selling in global stores, one of the earliest examples of open innovation from here has gone into products that have not yet entered the Indian market.

For instance, BIC and the National Chemical Laboratory, a Council of Scientific and Industrial Research laboratory in Pune, have developed a new micro-encapsulating technology that has gone into its fabric softener Downy. Yet to hit Indian stores, the company says its fragrance lasts for a week after the wash, longer than rival products.

The key lies in the technology that allows the perfume-containing microcapsules to open up when the dehydration process kicks in. The end product, says Chatterjee, is “cheaper (using less perfume) and better". The laundry science groups in Newcastle and Brussels were also involved in the development of the product.

P&G, like many other consumer goods companies, is trying hard to boost sales in the US and Europe.

While sales growth in emerging markets is easier to come by, in mature markets the company needs to rely on lowering prices or come up with innovative products, says Jack P. Russo, an analyst with Edward Jones, a retail brokerage in St Louis, US. “P&G is relying on both of these measures, but it appears the emphasis on innovation has been more pronounced since (Robert) McDonald has taken over as CEO (in June 2009)."

Consumers definitely want innovative products, but because they are also seeking value, P&G won’t be able to charge a premium on these as it would have done in the past, added Russo.

Cincinnati-based P&G is already treading that path. C+D 2.0, which has been effective since 2008, is all about “value creation for the company and its partners", Chatterjee says. According to him, internal studies have established that initiatives enabled by C+D deliver significantly more net present value when compared with those that did not leverage C+D.

P&G’s products touch at least four billion lives today. The company intends to add another billion to this in the next five years, spurred by its well-oiled innovation machine. To the two Asian mega centres in China and Japan, a third one is being added in Singapore.

“It’s no secret that Asia is a battleground," says Chatterjee, who is firming up plans to add more products as well as processes to BIC’s modelling capabilities.