Experts see mixed blessings from new company law; some say the move will result in rise in CSR consulting

New Delhi: India’s firm nudge towards philanthropy in the new companies law, which replaces outdated legislation with more streamlined rules, is being viewed with misgivings by some, but is likely to boost corporate charitable activity. The legislation has for the first time laid down ground rules for corporate social responsibility (CSR).

Companies with a net worth of more than ₹ 500 crore or revenue of more than ₹ 1,000 crore or net profit of more than ₹ 5 crore have been asked to spend at least 2% of their average net profits of the preceding three years on CSR. Although the law does not stipulate penalties for non-compliance, companies are required to justify any shortcoming in this regard.

“It is no surprise that the imposition of such obligations has not been well received by a large section of the corporates," Shardul Shroff, managing partner of law firm Amarchand Mangaldas, said by email. “While the new Act does give companies leeway in case they are unable to make such contribution, most companies fear the obligation will eventually snowball into becoming a mandatory provision."

The immediate impact will be manifold growth in CSR economy in India, experts said.

Taken together, registered companies in India will likely spend ₹ 18,000 crore on CSR activities per year, according to Pavan Kumar Vijay, managing director of New Delhi-based Corporate Professionals Capital Pvt. Ltd, a legal and financial services firm. “Companies will now be required to spend money on structured activities rather than, say, on religious causes and such like," said Vijay. “This would mean that there is big scope for CSR consulting, and we expect this activity to grow."

The new regulation would mean that the top 100 companies by annual net sales in 2012 will spend ₹ 5,611 crore on CSR activities, compared with the ₹ 1,765 crore that they are spending now, according to a March report published in Forbes India magazine. Government-owned companies account for a significant portion of current CSR spending. The rules being framed for the new law are likely to specify 10-15 such activities, which could include allowing expenditure on areas such as education, rural skill development and sports, with built-in safeguards to ensure they are not circumvented.

The CSR provisions could have a “cascading impact" on philanthropy, according to Rohini Nilekani, chairperson and founder of non-profit Arghyam and wife of Nandan Nilekani, a co-founder of software service firm Infosys Ltd and chairman of the Unique Identification Authority of India that aims to provide a unique identity number to all residents of India.

But it could be a mixed blessing, she said.

“CSR has been so narrowly defined within the companies. Until now, what they did with their profits after tax was left to them," Nilekani said. “They were innovating. If they wanted to try out something interesting, they had the freedom. Now they will feel that they better follow the letter of the law." 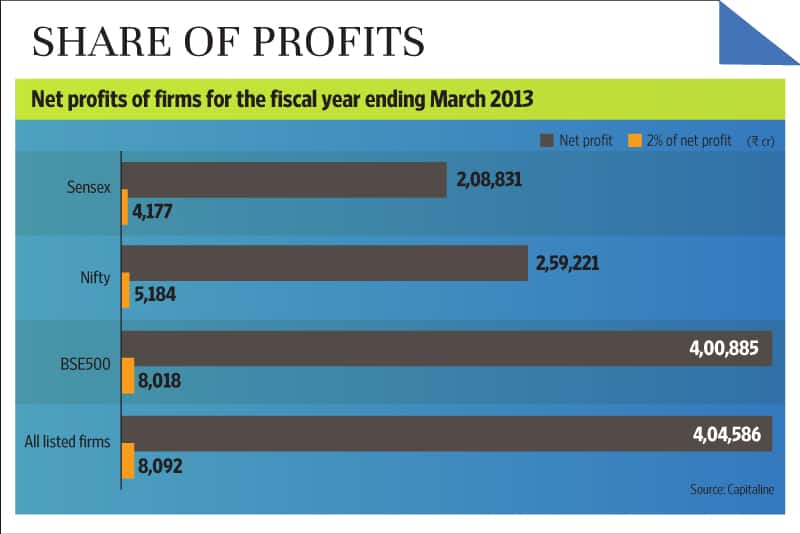 India will see a lot more CSR consultancies as a result of the new stipulation, said Dhaval Udani, chief executive officer of Give India, a charitable donation website. “There are three to four organizations that have been doing it for some time now, but I think we will see a lot more organizations getting into this and individuals consulting companies," he said in a phone interview.

“It shouldn’t be only about the money given. If companies use their resources or their skills, I believe that is far more useful," Udani said. “I wonder, because of this, will that element of CSR start drying up?"

The jury is still out on the impact the new rules will have on the non-profit sector.

“Already we are seeing that many in the NGO (non-governmental organization) sector have started moving into corporate CSR. There will be a shortage of people available for non-CSR activities," Rohini Nilekani said over the phone. “Companies will have to start thinking of what additional HR (human resources) they will need in their organizations, many professionals will move into that. Already, the existing NGO sector is under so much pressure. This is just one more form. It will definitely have an impact."

To be sure, it is unlikely to affect the country’s bigger philanthropic organizations much.

“Now we have to make the best of it. For people like me, personal philanthropy could extend into the more political areas and innovation that is high-risk," Rohini Nilekani said. “Anything that falls outside the scope of the Bill should be taken up more by personal philanthropic capital."

The new regulations will have little impact on other forms of philanthropy and private charitable work, according to Deval Sanghavi, partner and co-founder of Dasra, a philanthropy foundation. “Many small business owners are the decision makers, but the cheque comes from the company. There is already quite a lot of promoter-led CSR," Sanghavi said in a phone interview.

“Bill Gates has done more with his personal wealth than Microsoft has. Rohini Nilekani has sold shares recently. That’s an example of how personal philanthropy can at times do more than corporate, when the individual has far greater wealth to give," Sanghavi said.

Rohini Nilekani raised ₹ 164 crore for philanthropic activities by selling some of her shares in Infosys, the firm said in a BSE filing on 3 August.

“I think there’s going to be an unlocking of large amounts of capital, which needs guidance and support," Sanghavi said. “At least this opens up the conversation now."