Thanks for Visiting Mint
You seem to have an Ad Blocker on. Please turn it off in order to continue, or whitelist Mint
HOW TO TURN OFF AD BLOCKER
OR
REFRESH IF YOU ALREADY TURNED OFF THE AD BLOCKER
Home >Companies >Market share is a tool for profit

New Delhi: Star Plus, the flagship channel of Star India Pvt. Ltd, has returned to the leadership position in the Hindi general entertainment category (GEC). For the fifth consecutive week, the channel has ranked No. 1 after lagging behind Colors from the Viacom18 Media Pvt. Ltd stable for nearly 22 weeks. Star India chief executive officer Uday Shankar underplays the revival of Star Plus but airs his views on the corrections needed in the broadcast industry. Edited excerpts from an interview: 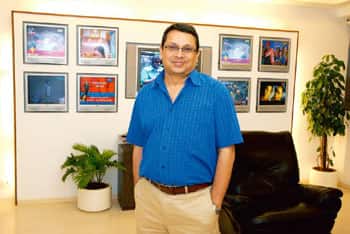 Wider view: Though all kinds of performances should be measured, Shankar says one need not have to look at them week to week. Ashesh Shah / Mint

What do you attribute the spike in the Star Plus ratings to?

Primarily, fiction. Some of the new shows are doing well and the old shows are holding on. We have launched a new show at 7.30pm (Sasural Genda Phool) and it has opened at a television rating of 1.7 and 1.8, which is very good for that time slot. Man ki Awaaz Pratigya gets 4.6 and 4.8 and is the leader in the 10.30 category. Yeh Rishta, Bidaai and Sabki Ladli…are still doing well.

In a news television cliché, “how does it feel to be No. 1 again"?

When you have been the leader of a category for 10 years, then losing the leadership for a few weeks and coming back is not exceptional. Star’s leadership is far deeper than weekly GRPs (gross rating points). Leadership is a combination of the ability to set the agenda, innovate and get a premium over every other competitor. Regardless of the weekly ratings fluctuations, we have done well.

I am very cynical about the way the entire industry—including the media that reports on it—has got so focused on the weekly performance of channels.

So you are not in favour of measuring weekly performance?

All kinds of performances should be measured, but you don’t have to look at it week to week. The business we are in is a marathon. What’s the point of measuring who was ahead after 10m or 20m?

The gross rating points are an extrapolation based on data that TAM (Media Research) has. Assuming the data is accurate, it doesn’t tell you anything. If one location does not have power for sometime, it would get reflected (in ratings). But that doesn’t mean that the strength of the channel is down or the story is poor.

But these issues were not raised when Star Plus was the market leader.

You have to bring up issues sometime or the other. Let me debunk this whole notion (about leadership). Star continues to be the leader. Our leadership is way beyond the leadership of Hindi. We are in news, sports and have English channels.

What are the issues with TAM research?

My issue is not with TAM. The issue is what do you do with ratings. The standard deviation on the sample can be significant. We need to look at data with some maturity. aMap (Audience Measurement and Analytics Ltd) delivers data on a daily basis, which is leading people to even more tactical responses.

For instance, a channel killed two of its most important protagonists in serials because Star Plus GRPs were growing. And since they needed the characters, they were also revived. These short-term tactics are employed even if they are not relevant to the stories. News channels resort to popular ghost and snakes stories when their weekly ratings are down.

Look, BARC is just an agency. It can be as good or as bad as we make it. BARC is focused on having a much larger database.

Are the entertainment channels also setting up a complaint redressal body on the lines of news channels?

We definitely need a body since we have a very active relationship with the consumer. The content that we deliver has an influence over people. As responsible members of the business community, we should be prepared to put ourselves to scrutiny.

Once in a while you may see stuff that is regressive. But what do you mean by regressive? At the end of day, it is entertainment. Also, media mirrors society.

But you just said that television influences the viewers.

It works both ways. Where do you get your stories and characters from? The point I am making is that I don’t believe that content is all regressive.

There is a range of studies that has shown the positive impact of soaps. The average Indian woman is a lot more aware and empowered and that’s what satellite TV has achieved in the last 10-12 years. It has worked better than the effort made by the government agencies. So we should not be hasty in sticking these labels…

Our 10.30 show is about an educated woman who marries into a conservative and feudal family. It’s about her fight. It’s an extremely empowering story. Obviously when you are telling a story there would be the good and the bad. We are not doing propaganda. We are doing content. It has to look believable.

What do you watch on television?

During the 22 weeks of leadership of Colors, were you under pressure from News Corp.?

News Corp. didn’t have to put pressure. If they didn’t like what I did, they would have asked me to go.

News Corp. has enough depth of understanding of (the) media business to know it’s a business where, like many other businesses, your leadership creates challengers. Overall, my bosses are confident of the ability of the team we have in India.

Star had announced a 24-hour home shopping channel. What happened?

The 24-hour channel did not happen as the licence did not come through. There were some queries and by the time we replied, the ministry suspended issuing fresh licences. Now the ban has been lifted and we will, hopefully, get the licence. However, our six-hour band on home shopping on Utsav has got a phenomenal response.

Star opposed the digitization of cable for many years and now you are voting for digitization.

Star had opposed CAS (conditional access system) and the way it was being pushed in 2003. We had predicted that it was full of flaws and we were correct. We are absolutely in favour of digitization. The growth of the industry is getting choked in the absence of digital distribution in cable.

What in your view does the broadcast industry require today?

First of all, the industry needs to focus on profits rather than on incidental things. Market share is a tool to make profits. It is the only industry where I have seen that people become loss leaders in order to chase market share. Profit consciousness is very important. Way too many people are focused on creating perceived value through fair or phony means to get money from the market rather than building a profitable entity with a robust P&L (profit and loss).

Also, (a) consensus on certain basic issues within the industry is important. Telecom is a very good example. The industry players were competing with one another. But they have created this whole shared back-end model that allowed everybody to reduce costs. Unfortunately, here we have turned the fight into such personal conflicts that people don’t even talk to each other most of the time.

What is also required is for the government to take a more broadbased-enabling position with the industry.

Are you looking for something specific from the government?

It should help us in unlocking subscription revenues. It is an absolute must. Digitization will ensure that there is transparency in billing and accounting from the ground. The advertising revenue for the television industry is nearly $2 billion (Rs8,900 crore). The under-declaration of subscription revenue itself is about $3 billion. The entire economics of the industry will change if that value is unlocked.

What about foreign direct investment (FDI)?

There are a lot of investment caps and the government is unnecessarily scared about some sectors. When a DTH (direct-to-home) player cannot own content according to the sector’s guidelines, what is the point of putting an FDI cap? Tata Sky (owned by the Tata Group and the Star group) seems to be the only company following it.

But you have applied again to the Foreign Investment Promotion Board for increasing stake.

It’s only to increase from 20% equity to 30%. But nobody looks at the broadcasters who hold 100% equity in DTH when the cross-media holding restricts it to only 20%.

There is pressure to raise the FDI cap in news channels.

Yes, the cap must be relaxed in news. The news channels are dying. They need money. No news channel has the money to spend on news gathering. After paying salaries and carriage fee, there is no money left. With the exception of one or two news channels, everybody else is losing money.