Hyderabad: Venture capitalist C. Srinivasa Raju said on Monday that he was willing to invest in Deccan Chronicles Holdings Ltd (DCHL) at the “right price", as the debt-laden newspaper publisher fights to overcome a financial crisis.

Raju, better known as Srini Raju, said he had been in touch with the management and creditors of Hyderabad-based DCHL and had received indications from the lenders that the publisher would seek a stake buyer once the sale of its Indian Premier League (IPL) team Deccan Chargers is completed. The team is to be auctioned on 13 September.

“They (DCHL) have two problems, they have to repay the outstanding loans and they need money for day-to-day operations," Raju said.

The sale of Deccan Chargers will help DCHL meet its immediate obligations, he said, adding that it would likely be followed by a stake sale in Deccan Chronicle Holdings, given the pressure on management from its creditors. He said he had told the management and creditors that he was willing to invest at the “right price".

Raju is the first potential investor to express his interest in buying a stake in DCHL, which is laden with at least ₹ 1,500 crore of debt as per Registrar of Companies filings. The company’s diversification into areas beyond its core business of publishing, including ventures into aviation, a book store chain and the cricket franchise, have at least partly contributed to its financial troubles. 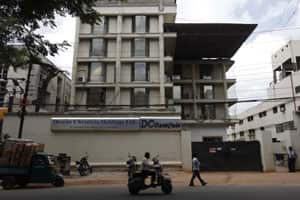 Debt hurdles: Deccan Chronicle’s office in Hyderabad. DCHL is laden with at least Rs 1,500 crore of debt as per Registrar of Companies filings. Kumar/Mint

DCHL chairman and promoter T. Venkattram Reddy told The Economic Times in a recent interview that “the newspaper business will not be sold".

He could not be contacted for comment on Monday.

Raju is the co-founder and chairman of private equity and venture capital fund Peepul Capital Llc. (earlier iLabs Capital), which manages a corpus of about $700 million (around 3,871 crore) for Indian-centric, growth-oriented investments. It has invested in 32 companies at different growth stages, according to its website.

He is married to the sister of the wife of B. Ramalinga Raju, founder of Satyam Computer Services Ltd. Raju, had, in January 2009 confessed to misstating accounts over several years and triggered a crisis at the company that led to its sale to Tech Mahindra Ltd.

He served Satyam Computer Services as chief operating officer and was also the first chief executive officer of Cognizant Technology Solutions Corp. in 1994-96 after the company was formed as a joint venture between Dun and Bradstreet Corp. and Satyam.

He was the first of five private equity investors in DQ Entertainment and exited when the company listed on the London Stock Exchange.

Raju said he is yet to get a clear picture of DCHL’s financials. “Once I get the balance sheet, we will know the value of the company," he said. He intends to play the role of a private equity investor and would not get into the day-to-day operations of the company, Raju said.

A DCHL banker with significant exposure to the publisher and who didn’t want to be identified said it was “premature at this stage" to talk about a possible stake sale in DCHL. As a lender, his bank would be “more than happy" to recover its loans by getting a strategic investor on board, the banker said. Mails sent to other DCHL bankers remained unanswered.

“Raising money wouldn’t be a problem for Srini Raju," said Satish Kantheti, head of the equity research division at Hyderabad-based broker Zen Securities Ltd. “The only issue for potential investors is that there is still no clarity on the level of debt in the company."

DCHL’s board of directors on Friday approved a resolution to restructure the company’s debt through an application to the corporate debt restructuring (CDR) cell, the company said in a statement to the National Stock Exchange. The Economic Times reported on Monday that a CDR package could result in the recast of up to ₹ 3,270 crore in loans from 28 banks and financial institutions.