New Delhi: Japanese car maker Toyota will consider setting up a diesel engine plant in India after observing the government’s policy decision on subsidy to the fossil fuel during the forthcoming Budget in March.

The company, which is present in India through a joint venture with the Kirloskar Group, is investing ₹ 500 crore in setting up a petrol engine plant and expanding its transmissions capacity in Bangalore.

“We will wait till the Budget. After that, we will look at the feasibility of setting up a diesel engine plant in India," Toyota Kirloskar Motor deputy managing director (commercial) Shekar Viswanathan told PTI at the 11th Auto Expo here.

He said the company will wait till there is a clarity on policies related to continuation of subsidies on diesel pricing. 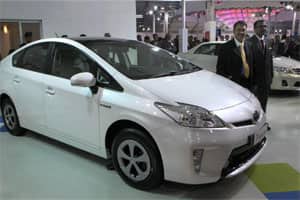 Viswanathan, however, declined to comment further saying “it is too early to say anything".

Expressing similar views, the country’s largest car maker Maruti Suzuki India (MSI) managing director and CEO Shinzo Nakanishi said till there is a clarity at the policy level, the company will not move ahead with any fresh investment on diesel engine front.

“We cannot go ahead and announce such a big investment unless there is some clarity. We are not saying that subsidy should be continued or withdrawn, but only requesting a clarity on long-term basis," he said.

Usually an investment of around ₹ 1,000 crore is needed to set up a diesel engine plant having a production capacity of 1,00,000 units per year, Nakanishi said.

“This means it is decision with ₹ 1,000 crore at stake. Without a clarity, it is difficult to take a decision," MSI managing executive officer (Marketing and Sales) Mayank Pareek said.

While inaugurating the 11th Auto Expo last week, heavy industries and public enterprises minister Praful Patel had said that there is a misconception in India that diesel is not a clean fuel.

“While in Europe and many advanced countries, we are seeing that a lot of automobile manufacturers are moving away from petrol technology to diesel versions. We in India still have misconceptions," he had said.