New Delhi: In the small village of Dindivanam—a 10-minute drive from the former French colony of Puducherry—dozens of coconut trees sway gently in the wind. A woman with greying hair sits beneath the shade cast by the narrow palm fronds, weaving together the leaves from a fallen coconut tree branch she will use to thatch her roof during the rains.

High above, dozens of coconuts sit heavy on the tree, ready to be plucked. That’s where Shanmugham comes in.

Coconut tree climber Shanmugham can scale a tree with deceptive ease, but is certain he doesn’t want his sons to learn his increasingly rare skills

Shanmugham is one of just five coconut tree climbers in the entire district, says Venkat Subramanian, the founder of eFarm, an agricultural logistics and transportation company that supplies many of the restaurants and hotels in Chennai with local produce.

Shanmugham makes his job look deceptively simple, using a stiff, rope-like harness looped around his shoulders and another around his feet to shimmy up the tall, ponderous tree, gripping the bark with bare feet. To scale a palm tree takes all of two minutes.

He uses a large machete-like knife, tucked into a belt, to cut the nut from the tree and shuck it, tossing it below. His day starts at 6.30am, and ends around noon, during which time he’s easily able to pluck hundreds of coconuts. “It isn’t really that hard," Shanmugham says.

Tracking Shanmugham down for a phone interview took weeks. Securing his services for a harvest can take months. Born into a family of farmers, Shanmugham says he began his career as a coconut tree climber tindependently at the age of 15.

“No one trained me," he says. “I just liked to climb trees." 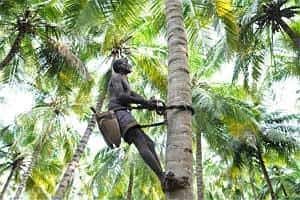 In demand: Shanmugham earns a monthly wage of Rs 15,000-30,000, with which he has managed to put both his sons through college. (Sharp Image)

“Our coconut tree climber is one of the highest paid members of our staff," half-jokes Subramanian.

In south India, it is hard to overstate the importance of the coconut. Harvested throughout the season, the coconut is unique in that every part of it can be used at every stage of its growth. Fresh “tender" coconuts are sold on street corners for their juice. Mature coconuts are used in myriad chutneys and curries. Older nuts are harvested for their oil, used in hair oils and soaps. Even the fibrous husk is not discarded; it can be used to make a variety of handicrafts and the fibre can be woven into rope.

To maintain their climber’s services, it keeps a meticulous database with the precise harvest times of all of its contract coconut farms.

“We have considered training youth from the cities with minor disabilities—like the hearing impaired—to climb trees," Subramanian says. “Finding climbers has been a real problem."

Kerala, the largest producer of coconuts in India with more than 300 million trees, is grappling with a crisis caused by the shortage of tree climbers in a state named after the fruit (kera means coconut). 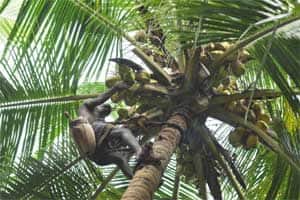 “The frequency of harvesting has come down due to the shortage of climbers," says T.K. Jose, CDB chairman. “Coconuts should be harvested every 45 days. But when there’s a shortage of climbers, many farmers can harvest once in three months or four months only." To fill this gap, Jose estimates that Kerala will need an additional 15,000 climbers—roughly twice the number it has today.

So why aren’t more people clamouring to climb trees?

“They think it’s dangerous," says Shanmugham, who has never been injured on the job. (The only injury he has ever seen was a fellow climber who slipped and fell—but managed not to break any bones.)

According to Jose, the dearth of tree climbers in Kerala appears to be linked to India’s rapid modernization, which has translated into the replacement of traditional careers in favour of ones that provide a higher social status.

“Once upon a time, coconut tree climbing was dominated by caste—mainly the weaker and the poorer sections of society," says Jose.

In Tamil Nadu, Subramanian has noted that the low social status associated with tree climbing has led to an outflux of youth from traditional climbing castes to cities—even though tree climbing may ultimately be more lucrative.

“People are getting better opportunities elsewhere through better education," agrees Jose. “So right now, traditional climbers are retired from the scenario, and replacement is not taking place."

High rates of migration have further exacerbated the trend, as many of Kerala’s traditional climbers have moved overseas to pursue more lucrative opportunities. The labour shortage has meant that the remaining climbers frequently charge exorbitant rates.

“I have paid as much as ₹ 50 per tree when it should be ₹ 10 per tree," says Jose. “Imagine how difficult it must be for farmers."

CDB has been making concerted efforts to reverse this trend and train the next generation of climbers. Since May, it has been running intensive, six-day training courses that, in addition to climbing, instruct trainees on how to properly maintain and nurture the growth of coconut trees through fertilization techniques and protect them from disease.

“We are trying to motivate the people and elevate their social status and self-esteem through good training, plus incentives for upward mobility in society, by linking it with social security, compulsory savings and decent remuneration," says Jose.

CDB is also recruiting across class and gender (one-third of all trainees are to be women) and has opted to label its graduates “friends of the coconut tree" rather than climbers, in an effort to delink climbing with caste, making it more accessible to upwardly mobile youth from all backgrounds. In the interim, farmers are left to fend for themselves—or to rely on local climbers such as Shanmugham to harvest their crops. On good days, Shanmugham might be approached by half-a-dozen farmers out-bidding one another to secure his services for the day.

Though he has a busy schedule, he says that any farmer can secure his services by paying an advance.

Yet, while Shanmugham plans to continue to climb until retirement, he says he does not want either of his boys to become climbers. “They have an education. I want them to have better jobs in the cities," he says.

Rajesh Jose contributed to this story.