When it turns one year old in June, it will have three Indian stores—another first, after being the first luxury retailer to enter India with a 51% stake after the government allowed single-brand retailers to do so.

But, the baby’s growing pains may well start after that. Zegna—and several other luxury retailers—may be forced to go slow because of a double whammy: sky-high rentals and a lack of premium retail space that are putting the brakes on their expansion plans. 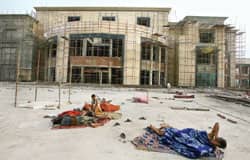 Since the time luxury retailers first drew plans for the India market, around two years ago, rentals have doubled, according to several industry estimates. Rentals now match those in Singapore or even London although sales for luxury goods are lower because India is still a developing market. This has put luxury brands in a spot, slowing expansion plans and, in some cases, forcing a reshuffle in franchise partners.

“Costs have gone up dramatically," confirms Sanjay Kapoor, managing director of Genesis Colours Pvt. Ltd, whi-ch is the Indian partner of Italian luxury retailer Canali SpA and Etienne Aigner, and will open stores for British mensw-ear brand Paul Smith and Italian ready-to-wear brand Just Cavalli. “Brands are now pushing back break-even points to around four years from two years as they had planned."

While most foreign luxury brands are either setting up or planning to set up a presence in India, doing so in multiple locations is simply getting to be unviable, at least for now.

“They cannot expand because there is no space," says Pradeep Hirani, chief executive of Kimaya Fashions Ltd, which is the Indian partner for the ready-to-wear labels Max Mara and Red by Valentino, and will bring Italian ready-to-wear label Versus. “Where do they open stores here? Chandni Chowk?" he asks, referring to the crowded, narrow-laned part of Old Delhi, best known for cheap bargains on everything from silver to spices.

This situation could ease somewhat when India’s first two luxury malls, the United Breweries Ltd’s UB City mall in Bangalore and DLF Ltd’s Emporio mall in New Delhi open in the next few months. But, luxury retail prices have zoomed to around Rs1,000 ($25) a sq. ft from around Rs400 ($10) two years ago.

And rentals are not the only problem. Salaries for retail staff could now match or exceed salaries in Thailand, Ma-laysia or, in some cases, even Singapore. “At these salaries, I am sure we will see better talent coming in from abroad," Kimaya’s Hirani says.

Duties on luxury products are also among the highest in India, meaning retailers often crunch margins to keep prices comparable to other markets. This makes rental to margins ratios and rental to revenue ratios wafer-thin, says Zegna’s Mukerji.

Not helping matters is that even in many of the stores, the big sellers are relatively low-ticket items, such as sunglasses and other accessories, and not too many of the $5,000 suits. And, often, the low-ticket items are also where retailers have to fend off fakes.

As a result, over the last year or so, foreign brands have struggled to expand retail operations in India. It is not easy to get numbers on how any foreign luxury brand’s Indian stores are performing but, some suggestions that not all stores are doing well came when German menswear retailer Hugo Boss AG shut two of its four Indian stores recently, though two new ones are slated to open by the end of 2008.

Italian fashion house Gianni Versace SpA has closed operations and will now distribute its ready-to-wear label, Versus, through Kimaya.

This reworking of plans comes at a time when India is getting more attention from luxury retailers than before, largely because of what has been a fast growing Indian economy, which could help offset some of the slowdown that’s hurting sales in the US and European markets.

“Brands will look at international markets because you need to diversify the markets you are in," says Radha Chadha, managing director of luxury retail consulting company Chadha Strategy Consulting.

“Luxury companies are opening in India as a long-term investment," says Glyn Atwal, professor for marketing at The Luxury Center at the French business school, ESC Rennes School of Business. “It is a learning curve and while there is a lot of talk about the emerging middle class but, the impact of that will be felt only in 10-15 years."

Not that everyone agrees. “India is the last frontier to be cracked and is a very exciting phase. There is enormous potential and (it) is growing at a rapid rate," says Tikka Shatrujit Singh, spokesman for Louis Vuitton, which plans to open three stores this year and says it will look to open more if space becomes available.