Thanks for Visiting Mint
You seem to have an Ad Blocker on. Please turn it off in order to continue, or whitelist Mint
HOW TO TURN OFF AD BLOCKER
OR
REFRESH IF YOU ALREADY TURNED OFF THE AD BLOCKER
Home >Companies >Line between low-cost and full-service carriers blurring

Mumbai / New Delhi: India’s low-cost carriers (LCCs) and full-service carriers (FSCs) are moving into each other’s flying zones as they look to survive competition made tougher by the recent economic slowdown. 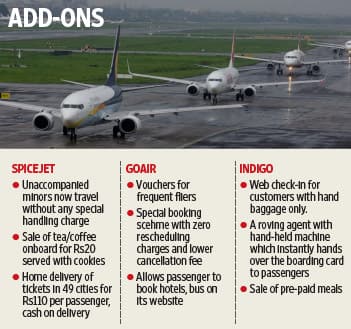 LCCs such as SpiceJet Ltd, GoAir, run by Wadia Group’s Go Airlines (India) Pvt. Ltd and IndiGo, operated by InterGlobe General Aviation Pvt. Ltd have begun offering a slew of free services and discounts that were expected only from FSCs until recently.

And FSCs such as Jet Airways (India) Ltd and Kingfisher Airlines Ltd have moved two-thirds of their passenger capacities to no-frills and all-economy services—the traditional domain of LCCs.

GoAir, which opened a business class in 2008, has now has started offering complimentary drinks to passengers at the airport before they board the aircraft.

It has tied up with beverage shops at various airports, allowing passengers to get coffee or tea by simply showing a boarding pass.

“The rationale behind offering freebies is to get an edge over the competition," said Rakesh Tiwari, vice-president, commercial operations, GoAir. “Travellers feel only fully-service carriers offer something for free."

Other LCCs such as SpiceJet and IndiGo are offering discounts for defence personnel between 26 January and 26 March, and free meals to corporate customers.

“We believe that regular engagement with customers is the key to our success. With these new campaigns, we will be in a position to bring to life the value proposition that passengers will experience when they fly with us," said Sanjay Aggarwal, chief executive at SpiceJet.

The Delhi-based airline has also introduced supervision of unaccompanied minors, online check-in, hot beverage and combo meals available for sale, two-bag waiver for guests connecting on SpiceJet within 24 hours of international travel and waiver of additional charges on sports kits.

IndiGo is not far behind. It has introduced a hand-held machine that issues boarding passes and check-in through automatic kiosks, besides informing passengers of their flight status through text messages on their mobiles.

In a bid to deal with the economic downturn, FSCs moved the bulk of their capacity into the low-fare space last year.

“In such an environment where low-cost carrier bookings now form a majority of the total bookings, it is becoming increasingly important for the pure play low-fare carriers to differentiate their brands for various consumer segments and offer value-added services," he said.

This, he added, allows travellers to build brand preference not just because of low fares—which was now common to all—but on account of added comfort levels, on-time performance, food and beverages or personalized services.