Airtel’s net profit declined to Rs343 crore in the quarter ended 30 September from Rs1,461 crore a year earlier, the company said on Tuesday. That missed the Rs351.3 crore profit estimate of 16 analysts surveyed by Bloomberg. 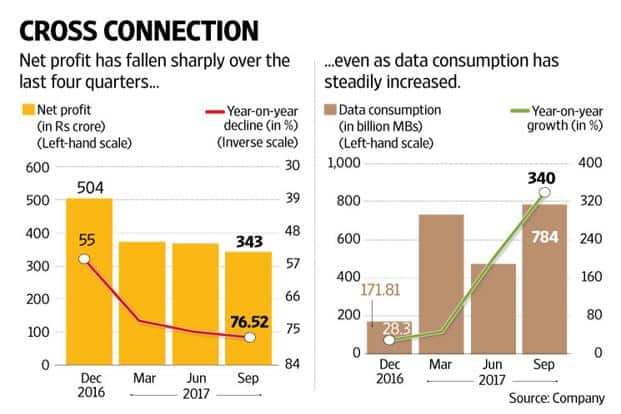 However, what made Airtel’s net profit look better was the contribution from its African subsidiary, which posted a net profit of Rs306 crore, an indication that the New Delhi-based firm’s efforts to revive its operations in the continent have started to pay off.

The lower-than-expected earnings came at a time when pressure has eased on Airtel after Reliance Jio started charging customers in April; it has increased tariffs thrice since then, after offering services for free for almost six months. Airtel said that the mobile phone services market continues to “experience value erosion and financial stress led by competitive pressures".

Increased competition from Reliance Jio has forced operators to boost spending on their networks to deliver faster data services. As a result, Airtel’s quarterly consolidated net debt increased to Rs91,480 crore from Rs87,840 crore in the June quarter. Net debt excluding deferred payment liabilities to the telecom department and finance lease obligations increased by Rs2,554 crore sequentially. Lower earnings before interest, taxes, depreciation and amortization (Ebitda), along with rising spectrum costs and continued investments in India, have resulted in return on capital employed deteriorating to 5.1% from 7.4% in the corresponding quarter last year, the company said.

According to Gopal Vittal, managing director and chief executive of Airtel for India and South Asia, the financial stress in the industry has continued due to double-digit revenue decline and “will be further accentuated by the reduction in IUC (interconnection usage charge) rates in the next quarter".

“This will eventually force operator consolidation and exits as we have witnessed in the recent past. Airtel remains committed to its goal of increasing revenue market share in this competitive environment by providing superior customer experience and strategically investing behind building more data capacities," Vittal said.

The company said its mobile data traffic grew four-fold to 784 billion megabytes (MB) in the quarter compared with 178 billion MB in the corresponding quarter last year.

Airtel’s monthly average revenue per user, or ARPU, fell sharply to Rs145 in the June quarter from Rs185 a year ago. The number of minutes spent on calls on its network, however, grew 40% during the quarter.

Amid competitive pressures and efforts to make the organization more efficient, Airtel reported that it employed 17,657 people at the end of the September quarter as against 19,462 in the year-ago period.

Airtel’s shares rose 0.98% to Rs497.65 on the BSE on a day the benchmark Sensex shed 0.16%. The company announced its results after the end of trading on Tuesday.