After transforming itself into a telecom marketing company over the last decade by outsourcing all core functions, the company began rethinking its strategy over the last two to three years, as it wanted more control over key functions amid rising costs and slowing growth, even as the industry battled price wars that destroyed margins and eroded profits.

Bharti executives privy to the development said the change in approach to its outsourcing strategy and bringing many functions in-house further accelerated when its current chief executive and MD Gopal Vittal took over the reins of the company and undertook an organizational overhaul.

“We have brought our network planning in-house. Even with the IT (information technology), we are now doing some of the things that were outsourced earlier. Times have changed. Earlier vendors handled it, but we realized that we needed more control," Vittal told Mint after Bharti Airtel’s earnings announcement early May. 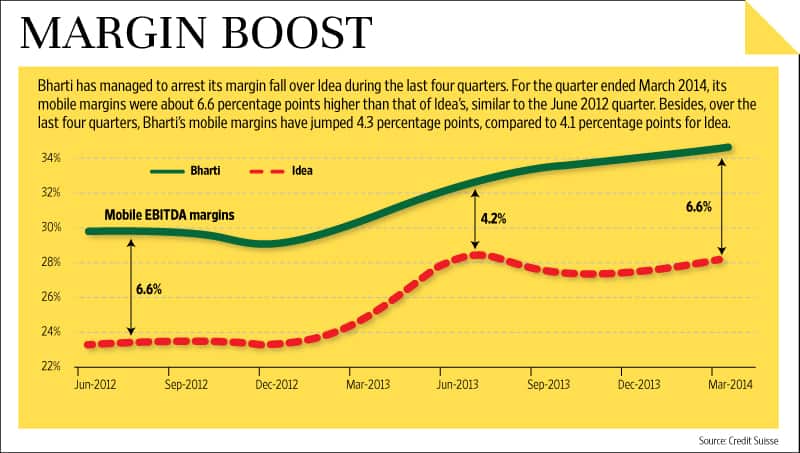 In the area of financial services, JPMorgan Chase and Co. sent shock waves across the IT services industry in 2004 when it cancelled its landmark $5 billion outsourcing contract with IBM and took the majority of the business in-house. JPMorgan, however, later on started increasing offshoring IT operations to India among other centres.

Similarly, US auto maker General Motors undertook a similar re-think in its outsourcing strategy under CIO (chief information officer) Randall D. Mott in 2012, when it in-sourced almost its entire IT operations.

At a global level, Airtel is not the first telecom firm to vastly change its outsourcing strategy. British Telecom’s (BT) outsourcing model is another example of a shift in strategy from a large telecom player. When BT started out, they had a multi-million dollar outsourcing contract with Infosys and then as the relationships with its vendors evolved, they took chunks of the contract back in house.

“What has also changed since 2004 is the fact that Airtel’s ability to find higher technical expertise in the market now is quite different from back then," said Peter Bendor-Samuel, chief executive and founder of outsourcing advisory Everest Group. “With the evolution of India’s IT industry, Airtel now has the option of hiring readymade, trained talent from the marketplace. And they have two reasons to do that now—lower cost and more control."

“As telcos like Airtel have become more mature and sophisticated over the years, they’ve felt that they can manage more parts of their IT operations in house," he added.

For Bharti, its baby steps to change became large strides when Vittal and his team looked into Airtel’s shrinking mobile margins as compared to its key competitors Idea Cellular Ltd and Vodafone India Services Pvt. Ltd.

Despite its robust networking outsourcing model to equipment majors such as LM Ericsson, Nokia Oyj and Huawei Technology Co. Ltd, Bharti’s margin lead over Idea Cellular, once an envy of the industry at over 40%, had fallen by about eight percentage points over 16 consecutive quarters ending March 2013.

For a while, Bharti quite did not know how to react. Its networking operating costs were found to be largely responsible for the company surrendering their margin lead over Idea.

Bharti executives, who declined to be named, said the company decided to go in for a reactive strategy and completely did away with its famous “$-per-Erlang’ outsourcing model" and replicated the business practices of Idea Cellular and Vodafone.

The Dollar per Erlang model means Bharti pays only for the traffic that comes out of the boxes (on the towers)—so Bharti is not involved in deciding when additional infrastructure should be added. The vendor can decide as to what level of network utilization requires additional capacity out of boxes. Bharti then purely focuses on customer acquisition and servicing and business.

A top executive with a mobile phone company, not linked to Bharti, said the industry had all along assumed that the likes of Vodafone, Reliance Communications Ltd and especially Idea, all of which had network outsourcing deals with gearmakers, would eventually move to the Bharti model of “complete outsourcing".

Under the “$-per-Erlang" outsourcing model" for voice and “$ per Mbps" for data, vendors such as Ericsson and Nokia are responsible for network planning. Here the network suppliers monitor the voice and data traffic on the network and use these metrics to determine when cellsites and other corresponding infrastructure should be added. This meant that network investments—both capital and operating expenditure—were controlled by the vendors.

However, Idea and Vodafone have continued to handle this in-house, enabling them to control their networks costs through a series of measures including installing new software solutions to base stations to increase efficiency rather than setting up new sites.

On the other hand, Bharti found that while its “$-per-Erlang" model led to its networks working at ideal capacity, its competitors were able to utilize their infrastructure at a far higher ratio, by allotting additional capacity only in regions where this extra expenditure would lead to increased usage by its customers.

Bharti had led vendors decide on capacity expansion while its competitors controlled this aspect very tightly— the outsourcing model of Idea involved the company handling the network planning and expansion, quality monitoring and optimization, all in-house, explained one of the executives quoted above.

Over the last couple of quarters, the results have been evident: The new strategy has enabled Bharti to utilize its networks better, cut costs and its executives admit that it has helped them to increase margins. These changes have happened incrementally over the last 8 months, the people mentioned above said.

According to Credit Suisse’s vice-president Sunil Tirumalai, Bharti has managed to arrest its margin fall over Idea during the last four quarters. (see graphic).

Executives say the key to this strategy will be manifest in its capital expenditure and operating expenditure guidance for FY15 when the company plans to increase utilization of its network from around 73% to close to 90%, in line with that of Idea Cellular.

Again in the new deal with IBM, some of the IT tasks have moved in-house.

As part of the new strategy, Bharti is building a lot of capabilities in-house, especially with its future and newer innovations, according to at least two executives familiar with the developments.

Even before Vittal took over and undertook the overhaul, the signs were clear that the company was readying a new philosophy with regard to its outsourcing strategy.

The first definitive signs of the new approach became evident in February 2013 when Bharti terminated its four-year joint venture with Alcatel-Lucent and took 100% ownership of the entity that managed its optic fibre, broadband and fixed line businesses. In 2008, Bharti had set up a 26:74 partnership with Alcatel-Lucent and had outsourced the management of its landline and broadband business in about 100 cities to this venture in a $500 million deal.

An executive with a rival operator admitted that the significance of Bharti terminating this deal and adopting a “reverse outsourcing" strategy was not recognized by the industry at that time.

According to executives with knowledge of the situation, when Bharti evaluated outsourcing additional assets to this joint venture, its assessment revealed that it could drive cost efficiencies, as well as have better control over its networks, by handling these functions in-house, leading to the termination of its partnership with Alcatel-Lucent a year ahead of schedule.

Bhart’s move also came at a time when Reliance Communications, which had entered into a similar but separate joint venture with Alcatel-Lucent, had extended the deal with the Franco-American gearmaker. The shift in Airtel’s outsourcing strategy is also a reflection of the changing times in India’s telecom sector. Under Airtel’s previous management, with regard to its deal with IBM, a rethink was already under way on how the telecom giant needed a change in its outsourcing strategy, leading to the company considering the possibility of evaluating other vendors when the landmark deal came up for renewal, executives familiar with the development said.

Under the terms of the old contract which was signed in 2004, IBM was the “master integrator", while vendors such as Wipro Ltd and Tech Mahindra also got minor chunks of the contract—Tech Mahindra more so because of its acquisition of Comviva Technologies Ltd.

When Airtel renewed the outsourcing contract with IBM, the terms of the deal reflected in no small measure the change in relationship between the two companies, as the telecom giant reduced the size of the contract and took back several IT tasks in-house.

“It’s a significant journey with a client (Airtel) for a decade, and then for another five years. Over the last few years, telcos invested effectively in 3G (third-generation services), but the next part of the journey is about data services, social and mobile, and how information is delivered," Vanitha Narayanan, IBM’s India chief, said in an interview in April.

“Our journey with telcos will be about data, customer experience, data services for customers as well as (analysing) the enormous amounts of data that the telcos have, and mining it in really creative and innovative ways to give them a competitive edge," Narayanan said.