Bangalore: The glow on serial entrepreneur Tiger Ramesh’s face matches the brightness of the light-emitting diodes, or LEDs, in his sparsely occupied new office. Ramesh has turned entrepreneur for a fourth time, placing bets on the emerging market for LED lighting.

Vignani Solutions has just begun rolling out LED lights for commercial office space. He isn’t disclosing the names of some of the big IT firms he expects to clinch deals with, but as a model building, Vignani has powered a new six-storeyed campus of iGate Global Solutions Ltd. 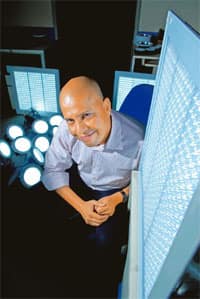 The Tiger in his name comes partly from his love of wildlife and partly from a combination of his initials (T.G. Ramesh—he says TGR became Tiger).

“There’s not a single incandescent or CFL (compact fluorescent light) in this building," says Ramesh, adding that the Karnataka chief minister will inaugurate the building later this month. Vignani Solutions is positioning itself in an LED market that’s in its infancy and caters primarily to decorative lighting and portables lights such as hand-held torches.

“Its application in lighting has come up in last five years but in the next four-five years LED will change this industry," says Kumar Ramesh, industry analyst, environment and building technology practice, Frost and Sullivan, South Asia and Middle East. He sees the lighting industry at the cusp of yet another cyclical change, barely three-four years after CFL’s entry into India.

LED started as low-energy indicators—glowing green and red lights in several electronic devices including a variety of remote controls—but are gradually replacing traditional sources of white light. At its heart lies a semiconductor component that emits light when powered by electricity.

As the world scrambles for cleaner and energy-saving technologies, LED looks promising—the wasteful incandescent bulb is already on its way out and its replacement, the CFL, doesn’t measure up on the environment scale as its toxic mercury content is difficult to dispose of safely. Moreover, LEDs last about 10 times longer than CFLs, using half as much energy.

Good quality LEDs are a power play of semiconductors, optics and electronics. Since they have a wide band of characteristics and are sensitive to current that passes through them, the LED design assumes great importance, says Ramachandran. “I am yet to come across a product that has packed so much of capabilities over a wide band of characteristics," he adds, referring to Vignani’s proprietary technology.

Ramesh claims the large sizes of Vignani’s LED fixtures, including 32-watt lights, are among the first such commercial products in India. Some start-ups are active in the space, though in an unorganized manner characteristic of the lighting industry in India. For instance, Pune-based Lucifer Lights, an 18-month-old firm, says it has 130 types of products which it is supplying to about 60 firms, including Maruti Suzuki India Ltd and Lilavati Hospital in Mumbai and Apollo Hospital in Delhi. With Rs20 crore in turnover, Lucifer is growing 300% every quarter on increasing demand from the industry and municipal and state governments, says chief executive and founder Rajesh Purohit.

In India, says Frost’s Kumar, the lighting market is worth $1.5 billion, of which LED constitutes 3%. But Ranga N. Bodavala, founder of the two-year-old social enterprise Thrive Energy Technologies Pvt. Ltd in Hyderabad, which sells LED-based lamps for rural home and street lighting, estimates the rural lighting market alone to be worth Rs60,000 crore in India.

Analysts say market leaders including Philips, General Electric, Wipro Lighting, Usha Shriram and others are experimenting with LED by way of smaller lights and are predominantly active in CFL where they have made huge investments.

Moreover, for multinationals, the LED market is in developed countries where governments have enacted legislation to ban incandescent bulbs. For instance, Philips last month became the first company to submit a proposal to the US energy department for a $10 million prize for an LED substitute of the incandescent bulb. Experts say Philips is set to win not only the contest but several billion dollars in orders as well.

Philips India, which in late 2007 became the first to introduce LED lights for home segment, says it continues to enhance its product range for the home but is in talks with large institutions for some pilots. “This technology has evolved more quickly than we expected but the efficiency (lumens/watt) is still a constraint; so is the price," says Mathew Job, marketing director, lighting division, Philips India.

Lumens/watt is a measure of the efficacy of lamps and indicates the amount of light (lumens) emitted by the lamp for each unit of electrical power (watt) used.

But the smaller entities aren’t losing sleep over this. “We are not a bulb/filament/heat company; ours is a technology product. I am sure others will have a strategy for LED lighting at some point in time, but right now we are creating the market and educating the market," says Ramachandran of Vignani.

Given the technology involved, the Silicon Valley model, with start-ups leading the way against larger competitors, may be the model that works, he says.

Currently, there are no LED standards in India. The Central Power Research Institute under the power ministry certifies only a few products, though Job says industry body Elcoma India is working on developing standards.

Early corporate adopters are enthused. “I am very impressed with Vignani," says Rohan M. Parikh, head of green initiatives at Infosys Technologies Ltd. “We are gung-ho on LED and it’s my personal goal to kill the CFL market in India," says Parikh, who believes the actual cost of LEDs is less than that of CFLs.

Infosys, which has a fresh annual lighting load of 1.2MW, is talking to a few firms including Vignani and Alternate Lighting Pvt. Ltd. “Smaller companies are very flexible (in design) and nimble," says Parikh, who also leads the green IT initiative at Nasscom, the tech industry body.

Others are not so sure. “To encourage local production and increase its application in the entire range of building lighting systems, the government should provide incentives for applying such green technologies as LED lighting and encourage growth," says V. Jayaraman, chief operating officer of the GMR Group.

These issues may take three-four years to settle, but by then Ramesh expects sales of Rs400-500 crore and that’s enough for him, he says, even as he mulls raising money for expanding the sales and marketing network, or even manufacturing facilities, if required.