Home > companies > Vineet Nayar | If another recession happens, US will be a big trouble for us

Vineet Nayar | If another recession happens, US will be a big trouble for us

Vineet Nayar | If another recession happens, US will be a big trouble for us

New Delhi: Even as HCL Technologies Ltd’s larger peers like Infosys Ltd and Wipro Ltd continued to disappoint the market with weak quarterly numbers, India’s fourth largest software services exporter has been growing at above the industry average. Vineet Nayar, vice-chairman and chief executive, HCL Technologies, said in an interview that the right bets at the right time have paid off for the company. Edited excerpts:

Your volume growth was 4% this quarter while TCS (Tata Consultancy Services) has delivered over 7%. After several quarters of good results, HCL has disappointed the market a bit. 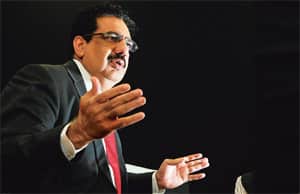 You have talked a lot about the ongoing and the forthcoming vendor consolidation exercises. But a lot already happened in this space about a year back. Can you elaborate on the trend?

This is all happening in continental Europe. There organizations were dealing with small local companies and not with global corporations and they had small contracts with, say an Infosys or a Wipro, and so on. Suddenly, they have started looking at total IT outsourcing, which is what happened in America in the depression time. So they do not want to grow those small contracts but want to consolidate them.

Secondly, the companies are asking for cost reductions, which the local vendor is not able to offer.

Everybody is debating if there will be a double-dip recession. Are people preparing for this?

You have to break the market into two—the US and Europe. Asia-Pacific is largely safe. In Europe, let’s say... 95% (was) not outsourced, so the impact of the recession is going to be a sudden increase in outsourcing, which is what happened in America. So 2008 of America is going to be repeated in Europe. In the US, we will be in trouble. Because in 2008, companies have already reduced their IT spends. So, if recession happens in the US and large companies go down, that will have a significant impact on the overall IT spends. Now the question is whether a double-dip recession is going to happen in the US or not. But the positive of Europe can be easily negated by the US. So we will have to wait and watch rather than run away with big expectations.

Has outsourcing in Europe picked up after the sovereign debt crisis?

And all the deals that we have won in continental Europe, like Ikea, are because of those investments. Out of the 20 new deals we have won, significant number are European deals. So we are seeing a lot of traction there.