New Delhi: Miguel is an intelligent man; he’s from Canada," repeats Bikram Kumar Singh, his voice changing pitch at each syllable, as clearly and deliberately as a car changes gear. 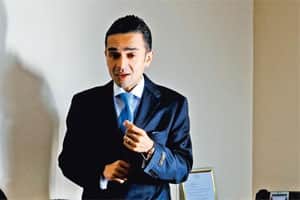 The right pitch: Bikram Singh claims to be responsible for the way more than 400,000 Indian and Filipino call centre operators have been answering the phone over the past 10 years. Photo: Pradeep Gaur/Mint

He gestures at the chart projected on a screen behind him, indicating the modulations of voice typical to American speech for the sentence in question, clasping and unclasping his neat hands over a crisp and slightly shiny, dark suit.

“We all know the problem of overlap," he says. The students nod and some voice their assent. “Pitch can help here."

Bikram Singh claims to be responsible for the way more than 400,000 Indian and Filipino call centre operators have been answering the phone over the past 10 years. His method, “Bikram’s Model of Intonation", is used in more than 50 of the leading BPOs in India as well as in other international businesses worldwide. Having worked as a senior training manager at General Electric Co. from 1998, Singh set up his company, BK One, in 2001 as a voice and accent training school for international BPO (short for business process outsourcing, a term loosely used to refer to companies in the business) employees, who are required to interact on the telephone with foreigners on a daily basis. “Now, we have over 400 clients," he says. “We specialize in BPO training in India, the Philippines, the Middle East, the US, Canada, Mexico, the UK, Romania, Kenya, South Africa, China, Malaysia, Indonesia and Singapore."

Each student practises his or her scripted call opening, in almost identical sing-song pattern. They sound like the chirpiest of high school cheerleaders. Singh corrects their pronunciation carefully in his own soft, precise American-Indian accent.

One of Singh’s heroes is Henry Higgins, the professor of phonetics from the 1964 film My Fair Lady, which tells the story of a flower girl who masquerades as an aristocrat after getting elocution lessons. He often makes his students watch the film for inspiration.

Unlike Higgins, a scruffy, domineering pedagogue with a vicious tongue, Singh is soft-spoken and impeccably groomed. But he shares many of Higgins’ principles. Notably, he understands the power of an accent in bonding people or alienating them from each other. As Higgins says, “An Englishman’s way of speaking absolutely classifies him; the moment he talks, he makes some other Englishman despise him."

Although the line was written in a pre-call-centre era, the import of the words applies just as well to the industry. Call centre employees work in tense environments and often suffer the brunt of a customer’s frustration. Complaints and queries need to be handled as quickly and efficiently as possible. There is no room for misunderstanding or muddles, and cross-cultural differences can cause unnecessary delays, Singh says.

Singh learnt from experience. A product of New Delhi’s St Columba’s School whose father was a top manufacturer and exporter of chess sets, Singh took his undergraduate degree from the University of Texas and his MBA from Stanford, and “so I brought a few things to the plate from both cultures", he says. He describes the difference between an Indian and an American parent, reprimanding his child. “The American father might say, ‘Look into my eyes when I am speaking to you.’ But an Indian child would look down as a sign of respect. Later, in a workplace, an American boss might perceive that Indian employee, who is looking at the floor out of respect, as lying or hiding something," he says.

Spotting a gap in the market, Singh took it. “I was entrepreneurial from the beginning. I knew the BPO industry was growing in India, because they were saving a lot of money in cost-cutting, and there’d be a hunt for manpower. It was a risk in those days, but I took it."

The risk paid off: the industry has grown exponentially in the last decade. BK One now commands a spacious office in Gurgaon and employs 2,500 people with 27 centres around the world. “Lots of freelance trainers have come since then," Singh says. “Initially, when this industry was fresh, there were a limited number of companies and they cherry-picked the best of the LSR (Lady Shri Ram), St Stephens, Hindu College grads. But now, because this industry has grown so much and so fast, it’s hard to get the same quality of people, so we are aiming at tier-II or III schools and students whose first language is not English. We focus a lot on grammar now to fill in the gaps."

Singh also teaches his students to adjust for English and Australian callers, pointing out subtle differences in cadence and pronunciation as well as idiosyncratic phrases such as “G’day" in Australia or “What now?" in the US. His favourite accent is Higgins’ own BBC British, otherwise known as received pronunciation and he is prone to bursting into song to explain the pitch levels. “Do, Re, Mi, Fa, So...or Sa, Re, Ga, Ma" he sings.

The teaching method is very technical and focuses on explanation of grammar as well as the use of different parts of the mouth to create different sounds. He gesticulates carefully while explaining, and uses a voice recorder and a computer to overlay his student’s recordings with the computer’s for comparison.

The only drawback with the precision of Singh’s model is that it is difficult to follow his rules exactly and still sound natural. The effect sounds somewhat forced and a bit like the speaking computer software popular in the 1990s.

One of Singh’s students voices this hitch in the class. “Whenever I use intonation, sometimes the customers say, ‘Is it the automatic machine?’" he ventures.

“Give me an example of what you say," says Singh. The man breaks into a surreal caricature of an American sales rep. His voice yoyo-ing wildly and randomly from high to low: “Thank you for calling. My name is Delvin. How are you doing today?" He pauses. “So, I mean, I’m not saying that every customer says that…it’s just..."

Bikram looks unfazed, betraying not even the shadow of a smile. “Okay," he replies, evenly. “So what we’ll do is now, we are going to work on your pitch levels. They won’t say that anymore."

Next: The Sari Draper

Other stories from this series