NSEL crisis, which has tarnished Shah's image, may make it difficult for him to do business in a regulated space

It was yet another high point for Shah, but more importantly, it was proof that he could have his way. The former chairman of the stock market regulator had denied him an equity trading licence, but, eventually, Shah had prevailed. MCX’s initial public offering (IPO) the previous year had been a blockbuster. FTIL was doing well. And Shah was riding the wave.

That day in 2013, he said that astrologically, it was the best time to start something. He sounded optimistic, upbeat.

In the next five months, the empire he had assiduously built over almost two decades would start to crumble. By early 2014, he would be in jail.

Shah, 47, is currently in jail in connection with the ₹ 5,574.35 crore fraud at the National Spot Exchange Ltd (NSEL). He has lost control of most of his ventures. FTIL holds a 99.99% stake in NSEL.

On 31 July last year, what was then considered a settlement crisis at NSEL came to light when the exchange suspended trading in all but its e-series contracts. E-series contracts were meant to allow retail investors to buy and sell commodities in dematerialized form. These, too, were suspended a week later.

The suspension may have been prompted by an instruction from the ministry of consumer affairs to the exchange, asking it not to offer futures contracts. A spot exchange isn’t supposed to do so, but NSEL was doing that. NSEL tried to implement the change, but because its appeal was to investors and members who were not interested in spot trades, it eventually had to suspend all trading.

It later emerged that all trading on NSEL happened in paired contracts, with investors, through brokers, buying a spot contract and selling a futures one for the same commodity. The entities selling on spot 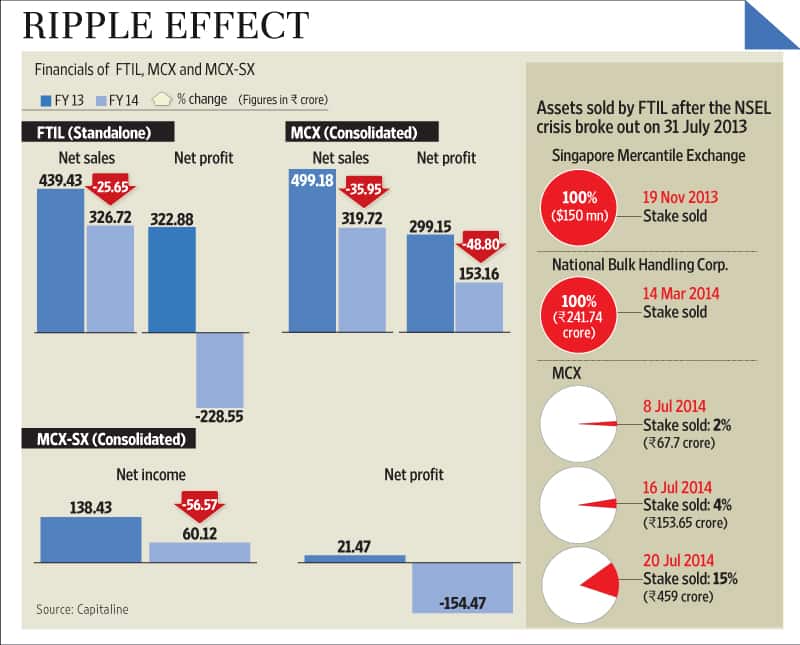 On 14 August, NSEL proposed a pay-out plan, but it has been unable to stick to the schedule.

Since then, legal troubles for Shah have spiralled. He and his companies are fighting more than 25 civil and criminal cases at various courts across the country and subsequently the high court has clubbed many of these cases together. Top lawyers including Mahesh Jethmalani and Janak Dwarkadas are helping him fight a seemingly unending legal battle, including cases filed by investors in NSEL, who are yet to recover their money.

Shah and his team have tried to calm the 13,000 investors affected by the fraud, but have failed. According to the submissions made in the Bombay high court, Shah offered to pay ₹ 1,111 crore, about 20% of the money involved, in return for blanket immunity from criminal and civil proceedings for him and other top officials at FTIL. Mint has reviewed a copy of a witness statement to this effect submitted in court.

NSEL’s investors, most of whom are wealthy individuals, instead chose to file a criminal complaint against Shah and others with the economic offences wing (EOW) of the Mumbai police. So far, EOW has not ruled out the possibility of Shah’s involvement in the fraud at NSEL. It will submit its chargesheet against Shah in August.

The investors, through their lawyer, claim that Shah was aware of the unfolding crisis at the commodity spot exchange. Shah’s lawyer Mahesh Jethmalani has maintained that Shah had no knowledge of the crisis as it was perpetrated by brokers and NSEL employees including its former chief executive Anjani Sinha.

On 21 July, while defending Shah in the high court, Jethmalani said, “Nothing can happen in the markets of this country without the knowledge of the brokers. I have also argued during Harshad Mehta scam. What happens is that they (investors) will put one Harshad Mehta behind (bars) and 10 others will be let off," said Jethmalani.

Mehta was the main accused in a 1992 stock market fraud that, when exposed, led to a collapse of the stock market. Jethmalani defended Mehta in various courts in connection with the fraud. Mehta died in 2001.

An FTIL spokesperson said in an email response to Mint’s queries that the company couldn’t “discuss" the issues raised with “the press" because “they are sub-judice or in the realm of strategic policy decision".

“Considering the current environment and various legal and investigative processes that are taking place, we would prefer to not comment on these issues for the time being. Once we think it is appropriate, most of these issues will be transparently shared after due approvals have been taken," the spokesperson added.

Some say that the NSEL crisis has tarnished Shah’s image and it may be difficult for him to do business in a regulated space. They add that Shah’s FTIL will have to relook at its business model. Shah and his family hold a 45.5% stake in FTIL, through which they promoted exchanges.

Its rapid growth, and the almost instant success it enjoyed, played a part in its eventual downfall.

“FTIL, as a group, grew exponentially over the past several years. As is now evident, the systems within FTIL did not grow commensurate with size—there were nearly 10-12 operating companies, each with its own CEO, and it perhaps ran like a loose federation without adequate supervision at the managerial level," said Ravi Sheth, managing director of Greatship (India) Ltd who also has a stake in FTIL. Greatship is offshore services provider to energy companies.

Apart from the Indian exchanges, FTIL invested in several outside India such as Dubai Gold and Commodities Exchange, Singapore Mercantile Exchange (SMX), Bahrain Financial Exchange, Bourse Africa, among others. Most of these businesses are now being sold. An FTIL spokesperson said the company has already sold its stake in SMX to Intercontinental Exchange Group for $150 million in November 2013 and is planning “to exit all exchange businesses in times to come, which would include foreign exchanges also".

“He (Shah) probably can’t involve himself any longer in the regulated space, hence the exit from the exchanges," added Sheth.

Shah, who was arrested on 7 May, has already spent around 80 days in jail. During his absence FTIL decided to exit MCX as directed by the Forward Markets Commission, commodity futures market regulator.

Shah, an electrical engineer by qualification, set up MCX in 2003. The commodity exchange achieved its highest daily turnover of around ₹ 1.2 trillion on 15 April 2013. At that time its market share was 95.1%. According to Anjani Sinha’s revised affidavit to the EOW, MCX was a “cash cow" for the group.

“FTIL set up at least 13-14 ventures, but after the success of MCX, it could not deliver any other success story," Sinha said in his revised affidavit.

And Shah’s FTIL has lost the first round in a legal battle against the capital markets regulator Securities and Exchange Board of India (Sebi) which, on 19 March, declared FTIL unfit to hold a stake in an exchange or a clearing corporation in the country. The Securities Appellate Tribunal has ruled in favour of Sebi.

Meanwhile, Shah’s 45.5% stake in FTIL has also been frozen by the EOW under the Maharashtra Protection of Interest of Depositors (MPID) Act.

A special court that hears cases under MPID has appointed a competent authority to liquidate assets secured by EOW in the NSEL crisis.

Rajnikant Patel, a former managing director and chief executive officer of BSE Ltd, said, “FTIL should ideally concentrate on its core competency—which is the technology and systems business".

“He clearly has challenges ahead, in restoring credibility and above all, his reputation. It will be interesting to see him evolve from here," said Sheth.

A top official at another exchange said, “After this kind of mishap, coming back is difficult, but people have made it. Many have come back, (although) they have become less ambitious ."

But can Shah extricate himself from the NSEL mess?

“Paying off investors as soon as possible and getting out of the mess is in the best interest of Shah and the company. If they don’t settle, FTIL and Shah will be entangled in this for years and years. The earlier the settlement happens, the better it is for everybody," said the chief executive of an Indian financial services company who spoke on condition of anonymity.

According to Ketan Shah, founder of NSEL Investors Action Group, the investors want Shah to pay at least 30% of the money upfront and give a written guarantee from FTIL that it will recover the rest of the money from defaulting borrowers in the next three years and settle the remaining dues.

Rajnikant Patel said the courts should determine the terms of the settlement process after the investigation is concluded.

“It is not yet established under law if he (Shah) was involved, and if he was, to what extent. Also, there are other parties who could be liable. I think it is a better idea to let law take its own course and define the settlement process," Patel said.

This is the third part in a series on the fallout of the fraud at NSEL.