Salaries at Indian law firms offered to law graduates have hit unprecedented levels, after Talwar Thakore Associates (TTA) and Khaitan and Co. respectively hiked their base pay to ₹ 13 lakh and ₹ 14.4 lakh per annum.

For Khaitan, that equates to a ₹ 1.2 lakh hike from last year’s salary of ₹ 13.2 lakh and puts its base beyond the next-highest annual salary in the market by the same amount.

In an industry where the biggest overhead eating into profits are salaries, competitors are generally not impressed whenever any one firm makes unilateral moves to increase salaries.

One partner at a firm that paid high salaries recounted rivals’ negative feedback on paying too much and ruining market rates for talent. 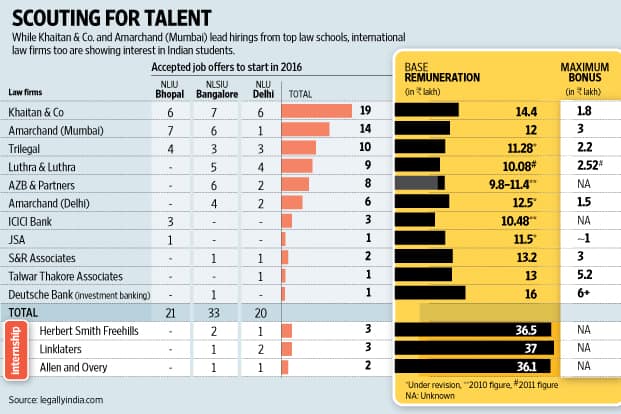 On top of its base, Khaitan is offering a performance-related bonus of up to ₹ 1.8 lakh—equivalent to one-and-a-half months of salary, payable in April, which could take a fresher’s pay to the ₹ 16.2 lakh-level.

TTA undertook its annual exercise of bumping up fresher and more senior pay bands in March, just before Khaitan, revising its annual base salary for graduates to ₹ 13 lakh from ₹ 12.5 lakh. This excludes a performance-related bonus that can be up to 40% of the base pay in rare cases, taking the theoretical maximum pay at TTA to ₹ 18.2 lakh per year.

However, TTA Mumbai partner Feroz Dubash explained that while recruiting freshers from campus, the firm quotes ₹ 13 lakh as the figure. Only if a college’s recruitment committee asks about the additional bonus, does the firm make it clear that bonuses are strictly optional and on average come to around 10%-20% of the base salary at the end of the year—though in rare cases, can reach 40%.

At TTA, it depends on such factors as performance, hours billed to clients and other contributions to the firm, Dubash said.

Khaitan and Co. partner Rabindra Jhunjhunwala justified his firm’s pay hike, saying, “The kind of quality that we want and the number of partners we have, and in light of the overall strategy of the firm, we thought that this is a fair compensation package to have." Last year, he said that more than half of campus hires received the maximum bonus, though it was not possible to predict for the next year.

The next highest base salary offered after Khaitan is currently by S&R Associates, which offers ₹ 13.2 lakh per year to freshers since 2014, with a performance-related bonus that can be as high as ₹ 3 lakh, according to Sandip Bhagat, managing partner with S&R.

Several top-paying firms said they would soon increase base salaries, though not necessarily in explicit reaction to Khaitan’s hike.

“If the economics are sustainable, why shouldn’t younger lawyers get paid more," commented Trilegal partner Anand Prasad on Khaitan’s increase.

Trilegal currently offers ₹ 11.28 lakh as a base with a performance-related bonus of ₹ 2.2 lakh.

“That number will most certainly be going up," confirmed Trilegal partner Yogesh Singh about the total ₹ 13.38 lakh package that was set in 2014 after three years at the level of ₹ 12.8 lakh ( ₹ 10.8 lakh plus up to ₹ 2 lakh bonus).

J. Sagar Associates (JSA), which is currently offering last year’s figure of ₹ 11.5 lakh as a base (excluding a maximum possible bonus of around ₹ 1 lakh), would examine by the end of this month, as it does every year, if it would increase its salary, said Mumbai-based partner Dina Wadia.

AZB and Partners Delhi partner Hardeep Sachdeva noted that the Delhi office’s current pay of ₹ 9.8 lakh for freshers would be revised upward with retroactive effect to date back to 1 April. The amount would be finalized this month, he said.

AZB Mumbai, too, which had offered a base of ₹ 11.4 lakh in 2010, had not yet finalized what its new salary would be, according to Mumbai managing partner Zia Mody. She said that the current salary was higher than it was in 2010, but declined to confirm currently offered fresher salaries, when asked via email.

Meanwhile, Amarchand & Mangaldas & Suresh A. Shroff & Co.’s Mumbai and Delhi offices, which already pay near-top-of-the-market base salaries, are understood to be looking into greater pay packages.

Amarchand Mumbai partner Vandana Shroff confirmed that the firm had increased its fresher base salary for Mumbai region to ₹ 12 lakh base with up to ₹ 3 lakh bonus. The Delhi management didn’t respond to an email seeking confirmation of the new figures, and hasn’t disclosed any numbers to interviewed students so far.

Ironically, given students’ preoccupation with salaries, in interviews, many of the top Indian law firms do not even get asked about salaries, nor would they share them with students if asked. And if students do ask, often the only figure shared is a package including the maximum possible bonus a fresher may get.

One partner from a rival firm, who declined to be named, characterized Khaitan’s move to disrupt the existing salary bands as a smart strategy. “They’ve done several things," he said. “They’ve started recruiting laterally a lot over the last two years...and are really driving volumes up so the number of deals that they’re winning are actually quite significant. They’re gaining market share and they’re obviously now coupling that with a real drive for quality." “Two to three years ago, Khaitan was very much one of those firms that (students) did go to, but everyone wanted to go to AZB and Amarchand," said the partner, adding that now things had changed.

The strategy appears to be working for Khaitan, which was the single largest recruiter last week when hiring fourth-year students due to graduate in 2016 from three national law school campuses.

“Day Zero"—a concept borrowed by India’s law schools from India’s top business and technology schools—involves inviting to campus a select group of recruiters most preferred by law students (usually because they offer the highest salaries).

Year by year, day zeros have come earlier and earlier, often at the request of law firms trying to compete for the top talent at the top law schools, so that nowadays, firms are giving some graduates job offers more than 12 months before they graduate.

National Law University, Delhi was first out of the gates this year on 1 April, with its graduates securing a total of 20 job offers—a strong performance for a law school that’s only had two batches graduate—doubling its day zero haul last year. (mintne.ws/1DEBVp9)

The day zero at National Law School of India University, Bangalore (NLSIU) was strong as ever, with a total of 33 jobs—the same number as last year’s day zero on 10 April 2014, and nine more than its 20 April 2013 tally of 24. (mintne.ws/1CbCpMi)

Other national law schools’ day zeros are likely to follow in the coming weeks.

But other than just jobs for a few students, top law schools’ day zero figures are often a bellwether for the health and optimism of the legal industry as a whole.

Khaitan has already hired 19 students to start in 2016 from those three law schools. In the entire 2014 recruitment year, Khaitan had hired only 20 from six national law schools. The firm declined to confirm how many it would still hire this year.

The next biggest recruiter from NLU, NLSIU and NLIU was Amarchand’s Mumbai office, which has already recruited 14, separately from its Delhi office, as a possible break-up of the firm looms—pending the outcome of a mediation between the Delhi and Mumbai managing partners and brothers. Amarchand Delhi has so far hired only six to start in 2016.

Compared to the whole of last year, Amarchand Delhi and Mumbai still have some way to go: both together had hired 41 students from nine national law schools in 2014.

Most law firms know that young and bright associates are the lifeblood of every legal practice, and have realized that the competition for that pool is increasing year by year as the law firms grow (though the total number of law graduates—of varying calibre—balloons every year by at least as much).

But other than just needing bodies to throw at legal work, finding the best national law school graduates is also a matter of prestige and branding for law firms.

“The law firm writ runs large, but law schools actually have greater bargaining power now," said one student member of a national law school recruitment committee, who declined to be named. “Frankly speaking, if law firms used to have an option to pick and choose graduates, the (top) law schools are now on an equal footing with them because even (students) have options to choose from now. It’s become more of a level-playing ground between both of them."

Of course, none of the Indian law firms have ever competed directly with the salaries offered by international law firms, which have already offered internships to eight students to graduate in 2016 from the three day zero colleges. Those internships, also known as vacation schemes, traditionally have a high likelihood of turning into overseas job offers with starting salaries of at least £39,000 ( ₹ 36.3 lakh), increasing to £64,000 ( ₹ 59.5 lakh) after two years as a trainee with the firm.

But with a lower cost of living in India, packages of ₹ 14 lakh and up are starting to erode even that traditionally unbridgeable gap—at least in the early years.

All round, things are looking up for law students at India’s top law schools.