Chennai : Banking on the growing purchasing power and busy lifestyles of urban, dual-income families, a slew of firms are now offering to help them run their homes, attempting to bring a measure of professionalism to a largely unorganized sector. 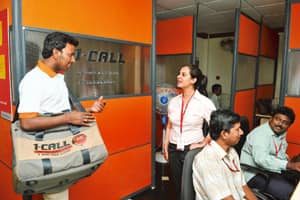 A call away: Prerna Bhutani,CEO of One Call India, interacting with her staff at her office in Tidel Park, Taramani, Chennai. By Sharp Image

“We did the research and saw the shift," said Siddharth Bhatia, the head of operations of Gurgaon-based eTechies.in, a company he co-founded in mid-2010 to provide onsite and remote information technology support for individual users and small businesses. Bhatia and his co-founders, who had previously worked for several years in a firm providing remote technical support to users overseas, received a $2 million infusion in January from venture capital firm Inventus Capital Partners on top of an angel investment from Google India’s managing director Rajan Anandan.

“People in the middle and upper-middle classes are now ready to pay to get professional service and peace of mind," Bhatia said.

Home maintenance services are starting to go corporate. One service in Chennai is promising busy professionals comprehensive services for their homes, minus the hassles of dealing with an informal sector.

With more than 1,500 individual subscribers and over 400 small-business subscribers for the company’s ₹ 3,000-per-computer annual contract—a 20-30% premium over rates at local repair shops, according to Bhatia—eTechies plans to extend its services to Bangalore and Mumbai in the next four months.

The move to organize the home-focused services sector is prompted by the same economics that drives the retail industry, which has seen mega malls and hypermarkets springing up in anticipation of the increase in the disposable income of India’s burgeoning middle class.

According to a recent report by the National Council for Applied Economic Research, India’s middle class, defined as families with an annual income between ₹ 3.4 lakh and ₹ 17 lakh, will grow 67% from the current level to 53.3 million households or 267 million people in the next five years. Further, according to the report, the typical middle class household spends half its income on basic daily expenses, leaving the other half for saving or discretionary spending.

Along with the growing affluence, however, comes increasing demands on the time of upwardly mobile professionals, which is where those who seek to organize the home-directed services economy come in.

“Given today’s busier lifestyles, with long commutes and extensive work-related travel, people have less time to hunt for a specific individual handyman—this offers an opportunity to companies that can offer a comprehensive set of services," said Devangshu Dutta, chief executive of Third Eyesight, a retail and consumer products consultancy.

“Our target is the typical working couple that doesn’t have the time to deal with (service-related) issues at the end of the day," said Prerna Bhutani, co-founder of Chennai-based One Call India, which facilitates home appliance purchase, delivery and after-sales service. She regularly sets up stalls in information technology parks, high-end apartment complexes and supermarkets to reach out to her target audience.

For ₹ 1,000 as annual subscription, or ₹ 100 per call, the company researches best prices among retailers, offers discounts through tie-ups with the retailers, arranges pick-up and drop services for purchases and repairs, and otherwise coordinates with retailers and repair centres to improve customers’ service experience, according to Bhutani.

With around 1,000 customers in Chennai, One Call India started operations in Bangalore and Gurgaon late last year, and may seek venture capital funding to expand to all major metros in the next three years.

“We have the exposure today to the kind of services people are using in the West, and customers are demanding that," Bhutani said.

The company charges ₹ 5-7 per sq. ft for cleaning services including specialized floor care, carpet care and glass cleaning, according to Britto. ISS Homecare earned about ₹ 1 crore from its operations in Mumbai, Bangalore and Chennai in the past year, and expects the figure to double every year, with services to be extended to other cities across India in the next 12-18 months.

However, Third Eyesight’s Dutta sees a gap between the demand and most efforts so far to tap it. “Most (of the companies) rely on a network of individuals as subcontractors, and there are gaps in terms of filtering these individuals for skill level, there is little or no roster management, and the result is highly inconsistent customer service. Therefore, customer retention for repeat contracts is an issue, and with time, if the poor reputation spreads, new customer acquisition also becomes difficult."

In the case of eTechies, it was the management outlook, more than the market demand, that motivated Inventus’ investment.

“Yes, Indian consumption growth (of devices) was clearly a driver for eTechies," Parag Dhol, a director at Inventus, said in an email. “We tend to be hugely entrepreneur driven, though."

The companies, naturally, insist that their services beat what’s currently available. “Personally, as a working woman living alone, I found it very difficult to repair a broken tap or flush—just waiting for the guys—and safety was an issue," said Shaifali Agarwal, founder of Delhi-based EasyFix Solutions, which provides plumbing, electrical and carpentry solutions.

EasyFix, which charges a minimum of ₹ 100 per visit, has had about 1,300 customers in the National Capital Region, and plans to expand to Mumbai, Bangalore and Hyderabad by March.

Agarwal admitted that handling a large group of workers—24 in her case—was a significant challenge, one that probably has kept the sector mostly free of corporatization.

Pegasus Facilities of Chennai, which provides cleaning services for residences and vehicles, combines attractive employee benefits with a nifty micro-management system to stay in control of its workforce of 40 full-time employees. The company’s cleaning staff earn about ₹ 7,500 a month as salary, besides conveyance fare and a customer-referral bonus, plus tips, co-founder Vijay Simha said.

Employees must check in to the company with missed calls when they reach a customer’s residence, when they finish the job and when they leave, Simha said.

The company offers several cleaning packages—entire residence, kitchen, fans and fittings, windows—of which the bathroom cleaning service begun two years ago has been the most in demand, according to Simha. For a minimum of ₹ 5,500 per year, the company cleans two bathrooms twice a month. Of 9,000 households that use the company’s services in Chennai, about 60% are dual-income families, Simha said, adding that he gets three-four new contracts and one or two renewals every day. Pegasus expects to expand to Pondicherry and Coimbatore this year, and is seeking franchisees in cities across India. Simha gets occasional complaints from customers, he said, and he tells them, “I can’t make your bathroom new—I can just clean it. What you don’t have the time to do, I do—that’s all."