Nearly a decade after Vaatsalya Healthcare became the first medical institution to venture into India’s hinterland, the company is coping with growing pains

Bangalore: Nearly a decade after Vaatsalya Healthcare became the first medical institution to venture into India’s hinterland, the company is coping with growing pains.

Founded in 2004, Vaatsalya is now the largest hospital network serving so-called tier-II and tier-III cities and towns in India, providing primary healthcare to 400,000 patients who previously had scant access to affordable medical treatment.

As it quickly expanded across two states, Karnataka and Andhra Pradesh, Vaatsalya had trouble managing its 17 hospitals. Communicating and coordinating goals with its disparate centres and 1,400 employees proved difficult.

“Cascading (goals) down and holding some people responsible was just impossible if they were all their own islands," said Shanthi Mathur, vice-president of transformation, who joined the Bangalore-based company in 2011. “Policies were not clear. Everything would come (to the central office). There was so much noise."

The noise has since abated, as the company doubled the staff strength at its head office to 50 and began efforts to standardize internal procedures. It increased the focus on pharmaceutical sales, for which margins are higher than that on treatments.

Vaatsalya is also planning to make four of its medical offerings—general medicine, general surgery, obstetrics and gynaecology, and paediatrics—uniform across each clinic.

These core specialties address up to 70% of healthcare needs of primary patients, who typically earn between ₹ 6,000 and ₹ 20,000 a month, explained Vaatsalya co-founder and CEO Ashwin Naik. But at its far-flung locations, Vaatsalya still struggles with retaining medical professionals. 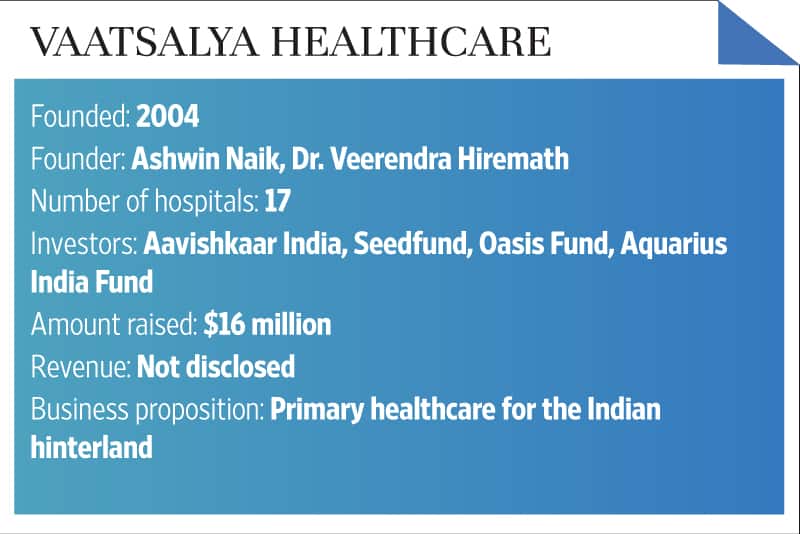 “In many locations where we are, they’re so remote that it’s a huge challenge—finding doctors and sending them there," said Mathur. “The turnover rate is so high."

To address the issue, the company is rolling out plans for a training institute and partnering with local non-governmental organizations to educate healthcare professionals. It is searching for innovative fixes as well. Its clinic in Chikmaglur, a small Karnataka town, will offer “tele-medicine"—video technology that allows doctors to provide remote counsel and treatment, such as dialysis procedures.

Issues with retention have not stalled the company’s growth. In the past financial year, its hospitals saw 150,000 additional patients and are now adding around 40,000 more a month.

From 2008 to 2011, Vaatsalya raised $16 million in venture capital and private equity in three rounds from Aavishkaar India, Oasis Fund, Aquarius India Fund and Seedfund. Naik said the firm has no plans for further funding. Instead, it will focus on adding seven hospitals this year, including its first in Maharashtra.