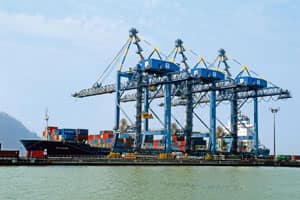 Capacity expansion: JN port plans to deepen its channel to 14m to enable ships with a capacity of loading 6,000 standard containers to berth.

N.N. Kumar, deputy chairman of JN port, confirmed that Royal Boskalis had quoted the lowest price for the contract.

On 1 March, the cabinet committee on infrastructure had approved a budget of ₹ 1,571.6 crore for the project.

JN port has been struggling to implement the project, key to its capacity expansion plans, for the last eight years.

The port is not deep enough at 11.5m and can handle ships with a capacity to load only up to 3,000 standard containers. This too is difficult and can only be managed by ensuring the ships enter at high tide.

It does handle bigger ships, but these enter the port only after off-loading some of their cargo elsewhere to reduce weight and draft requirements. This underutilization of capacity results in losses to shipping lines. The port plans to deepen the channel to 14m from the existing 11.5m to enable ships with a capacity of loading 6,000 standard containers to berth.

The project has been delayed by at least four years and is now scheduled to be completed by 2014 instead of the earlier estimate of 2010 if an earlier auction had gone through.

The last auction had to be scrapped in July 2008 because the lowest bid of ₹ 1,050 crore for the work had exceeded the budget of ₹ 800 crore. The port, one of the 13 controlled by the Union government, loads more than half the container cargo passing through India’s ports.

The port cannot handle more containers unless it expands capacity.

Larger vessels bring about economies of scale, and lower the cost of operations for the shipping lines, which then translates into lower freight rates for exporters and importers.