Thanks for Visiting Mint
You seem to have an Ad Blocker on. Please turn it off in order to continue, or whitelist Mint
HOW TO TURN OFF AD BLOCKER
OR
REFRESH IF YOU ALREADY TURNED OFF THE AD BLOCKER
Home >Companies >Jet Airways cuts flights to Kochi till March end to match demand

Jet Airways has combined certain flights and cancelled those on alternate days. The flight cancellations are largely on routes to West Asia, apart from a few domestic destinations. 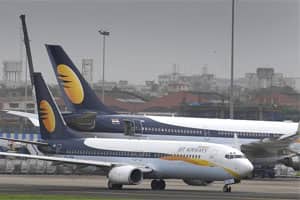 “Jet Airways has made changes to its schedule for some of its flights from Kochi to the Gulf on certain specific days for the period of mid-February until end March 2012 for operational reasons," a Jet Airways spokesperson said in an email. “All flight schedules planned will be operated with intimation to the regulator. The airline informs its guests of all changes in schedule through the airline’s call centre and travel agents."

Director general of civil aviation E.K. Bharat Bhushan confirmed that the airline had submitted a revised schedule. Bhushan said the airline has clubbed several flights to match demand. The Directorate General of Civil Aviation (DGCA) is the regulator of the airline industry.

According to experts, March is a lean season and the reduced occupancy is putting pressure on margins.

A 22 February report by international brokerage BofA-Merrill Lynch said analysts continue to remain negative on the aviation sector and they expect Jet Airways to post losses in the current fiscal. It said the sector is under pressure because of slowing traffic growth, strong capacity addition by low-fare carriers and yield growth not sufficient to cover costs.

According to consultancy firm Centre for Asia Pacific Aviation (Capa), the road to recovery for the nation’s airlines will likely be bumpy, with the heavily indebted sector having already accumulated losses of $6 billion in the last five years. This will be compounded by a record $2.5 billion loss in the 12 months to 31 March.

Jet Airways posted a fourth straight quarterly loss in the three months ended December 2011. The Naresh Goyal-controlled airline reported a loss of ₹ 101.22 crore in the quarter ended 31 December against a profit of ₹ 118.23 crore in the year-ago quarter.

“Jet Airways has cancelled a few flights by combining various flights. Though largely the cancellations are made in Gulf routes, various domestic flights connecting metro cities to Kochi were also combined or cancelled," said a leading travel agent in Mumbai, who spoke on condition of anonymity.

He said the airline has described the move as “rescheduling", not cancellations".

A senior Jet Airways executive said the airline was reworking the schedule to match demand and it would be a temporary phenomenon. All flights would be reinstated starting April, he said.

Kingfisher Airlines continues to operate as per the revised schedule of 175 flights a day instead of 240 flights even as DGCA is probing the cancellations.