The power of the founder’s mentality

A new report by Bain & Co. says 85% of company shortfalls in achieving sustained, profitable growth are caused by internal breakdowns and not external factors.

The report, titled Barriers and Pathways to Sustainable Growth: Harnessing the Power of the Founder’s Mentality, finds that 85% of the barriers to profitable growth for the average company are internal and manageable— not external and uncontrollable, such as unfairly advantaged competitors, government regulations, inaccessible technologies and market conditions that do not offer growth opportunities.

For companies with more than $5 billion in revenue, this number rises to 94%. The inability to overcome these internal factors will cause two out of every three companies to stall, be acquired or disappear within the next 15 years.

These are the results of a five-year study across 8,000 global companies and discussions with executives in 40 countries about the key barriers that companies face today in the pursuit of sustained and profitable growth. The research was led by Chris Zook and James Allen, who are co-founders of Bain’s strategy practice and authors of several bestselling books including their most recent, The Founder’s Mentality (Harvard Business Press, June 2016).

“Companies have become very good at monitoring external results like market share, customer acquisition and loyalty, and revenue growth. Yet, we find that most breakdowns in the marketplace today trace to deeper inner root causes about how the company was built and led on the inside," said Zook. “Business leaders and investors should pay as much attention to these measures of inner vitality as they do to results in the marketplace. This is becoming increasingly true in a world with ever stronger and faster young insurgent companies attacking incumbents that have internal issues that can get in the way of adapting and being able to retain the best talent."

In the course of their work, Zook and Allen discovered a powerful way to gauge and manage the internal health of a company that they call, “The Founder’s Mentality". 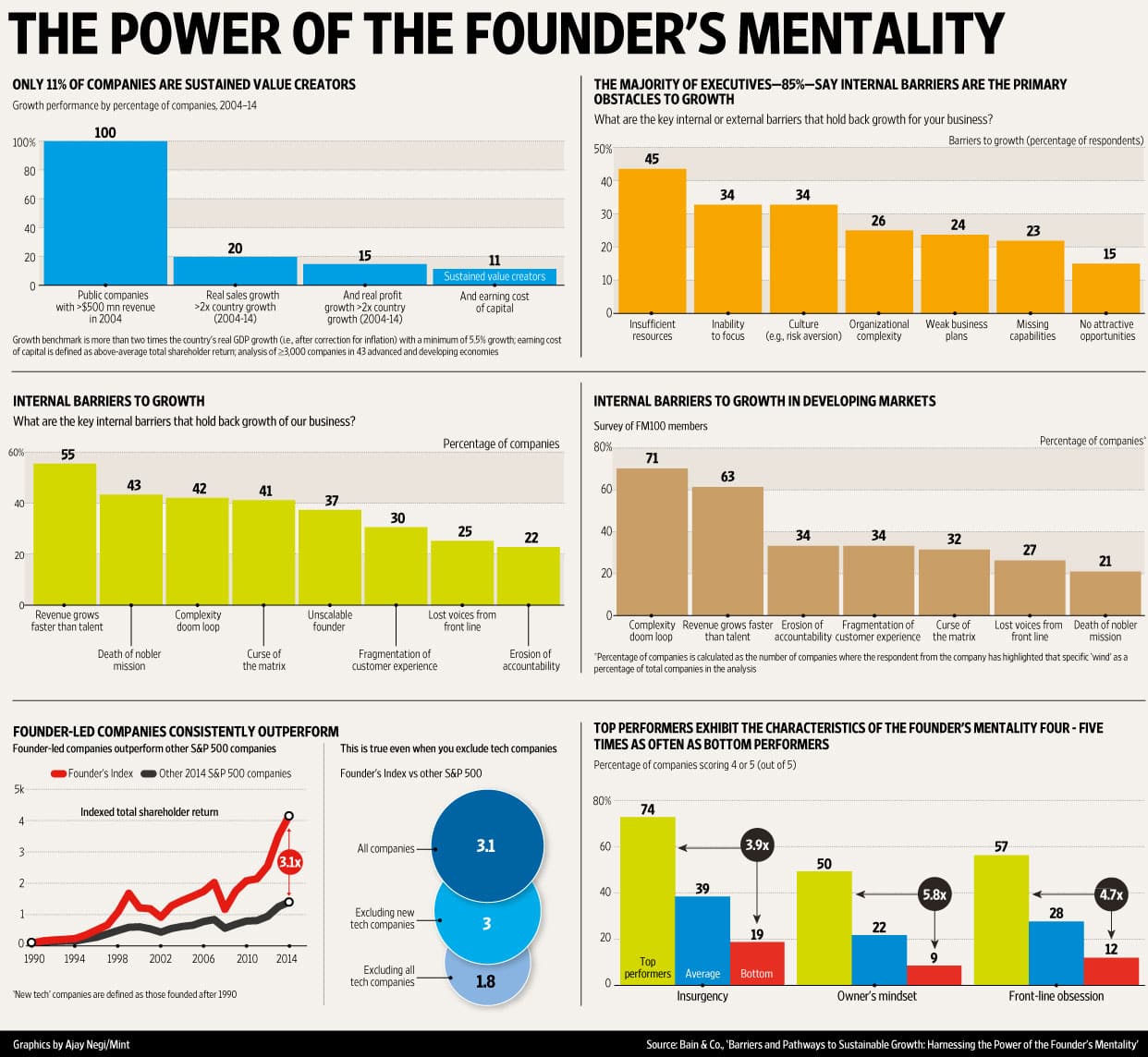 —An insurgent mission that distinguishes a business and inspires its people.

—A front line obsession that empowers and celebrates frontline employees, while driving relentless attention to detail in the customer experience.

—An owner’s mindset that fosters a deep sense of responsibility to solve problems on the spot, and to fight against the forces of complexity and bureaucracy that slow down companies.

Those that invest to maintain these attributes as they grow have a five times greater chance of avoiding or overcoming internal hurdles and delivering top performing business and financial results.

Further, the study found that a Founder’s Mentality is especially critical in helping to prevent or deal with three predictable crises of growth that Zook and Allen label overload, stall-out and free fall. Decisions and actions that leaders take during these periods in their company’s life cycle determine an estimated 80% of the major swings in its value. Therefore, leaders, board members and investors must constantly ask where the business is relative to these inflection points and how it is doing in maintaining its Founder’s Mentality.

Here are the other key findings in the Barriers and Pathways report:

—The pursuit of profitable growth is becoming more challenging and more ephemeral. Only one company in eight is able to achieve its growth targets over a decade and can sustain more than 5.5% growth in revenue and profit while earning its cost of capital.

—The fastest-growing young companies can scale their business twice as fast as two decades ago, and the largest incumbent can experience stall-out faster than ever. The result is an increasingly shorter business life cycle and a greater need for incumbents to retain speed and adaptability as they grow.

—The best-performing companies are those in which the founder is still involved. These companies achieved 3.1 times higher total shareholder returns over the past 15 years, compared to others. Excluding the Silicon Valley mega-successes like Google and Apple, the gap is 2.6 times.

—The most sustainably profitable companies exhibit the characteristics of the Founder’s Mentality four-five times as often as lower performers.

—About 80% of the swings in value for companies occur during or as a result of decisions made in one of three crisis periods: overload (the crisis of youth), stall-out (the crisis of incumbency) and free fall (the crisis of late maturity). Focusing on the Founder’s Mentality helps companies survive all three.

—Only one in 17,000 companies will grow to $500 million and become a sustained value creator because of the bottlenecks, systems breakdowns and complexity that accompany growth, and lead to overload.

—Executives surveyed cite a series of predictable forces that contribute to overload that include revenue growing faster than talent (55%), an unscalable founder (37%), lost voices from the front line (25%) and the erosion of accountability (22%).

—Unlike in the past, large companies have a hard time sustaining growth and creating value for shareholders.

—About a third of the 1998 Fortune 500 companies stalled out, and a third were acquired or went bankrupt. Of those that stalled out, only 10-15% recovered.

—Executives report that four key forces create stall-out: the death of the nobler mission (43%), unchecked complexity that kills growth (42%), bureaucratization (41%) and the fragmentation of customer experience (30%).

—80% of those that recovered from stall-out did so by returning to their core business, and 20% by redefining the whole business model.

—Zook and Allen’s study also discovered that countries able to foster young entrepreneurs and nurture young companies with a Founder’s Mentality were able to grow at a faster rate.

—Firms with low Founder’s Mentality are less able to contend with the forces that cause overload and stall-out.