Bajaj cuts prices of some models to grow market

Bajaj has taken a 'price correction' on the CT100 range to cater to the marriage market, says Kevin D'sa, president of the finance vertical at the firm

Mumbai: The idiom ‘desperate times call for desperate measures’ seems to ring immensely true for India’s third largest motorcycle maker, Bajaj Auto Ltd, as the company has been slashing prices of its CT100 range of entry-level models since the beginning of the year, the most recent being an average reduction of about Rs3,000 in April.

The Pune-based auto maker has taken a “price correction" on the CT100 range to cater to the marriage market, said Kevin D’sa, president of the finance vertical at the firm, on a conference call after the announcement of the company’s March quarter results. 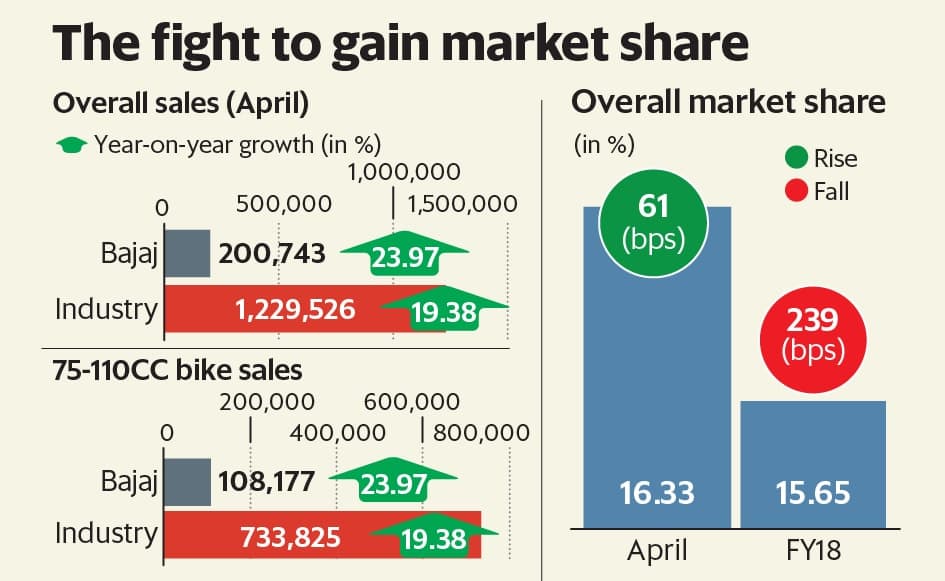 The company will reconsider its prices once the marriage season demand dries up, he said, adding that Bajaj seeks to “expand market share in the lowest-end segment by make it more affordable".

At present, the ex-showroom (Mumbai) price of the basic CT100 variant is Rs31,098, giving it a significant price advantage compared with motorcycle market leader Hero MotoCorp Ltd’s well established Splendor and Passion, which retail at over Rs50,000 a piece.

An upgrade of the basic variant was launched in mid-2017 with an ex-showroom (Mumbai) price tag of Rs33,536. A back-of-the-envelope calculation indicates a price reduction of over Rs2,400 for the basic model alone.

Within the CT100 range, Bajaj offers various trims depending on an electric start system and alloy wheels. On average, Bajaj has reduced the ex-showroom price of the CT100 range by about Rs5,000 in 2018, said a dealership executive based in western Mumbai, on condition of anonymity.

“Prices were reduced in March and April. In both months, sales of CT100 range went up 20% over the previous year. About 50% of these customers considered other brands but decided on Bajaj because of the price reduction", the dealer added.

The maker of the Pulsar motorcycle aims to corner a larger share of the rejuvenated domestic motorcycle industry by undercutting rivals in the volume-spinning entry-level segment (having an engine capacity between 75cc to 110cc), as the onset of the wedding season in north and central India drives up non-metro demand.

The strategy seems to be working as Bajaj outgrew the broader industry in April, according to data provided by the Society of Indian Automobile Manufacturers and posted a rise of 61 basis points in market share to 16.33%.

The company also slashed prices on an older model of the Pulsar150 by about Rs2,500 to “make place" for a new twin-disc brake variant introduced in April, according to D’sa.

On the back of these initiatives, Bajaj is confident of outgrowing the domestic industry but not without at a cost. The pricing power in the entry-segment is marginal, if at all, and such a price cut will further dampen margins, say analysts.

The CT100’s Ebitda margins are already in the red, D’sa said.

The company further plans to “attack" the entry-level segment, “where a big chunk of the market sits", with some new products which are in the works, according to S. Ravikumar, president, business development and assurance, at Bajaj Auto.

“For the immediate quarter and the next, the main action is going to be in the entry segment", he added.

Going forward, analysts say the worst is not yet behind Bajaj. The company faces intense competition in the domestic market, which will lead to continued market share erosion for the company, said Bharat Gianani, analyst at Sharekhan Ltd in an 18 May note.

Analysts at Prabhudas Lilladher Pvt. Ltd hold a “bleak outlook" for Bajaj, and have reduced their margin estimates by 130 basis points for FY19 owing to “the company’s inability to take the required price hike" and rising commodity costs, said Saksham Kaushal and Poorvi Banka in a 21 May note.