Panipat, Haryana: Heaps of colourful woollens are piled up in the midday heat at Sumit Jindal’s factory yard.

Rejected garments of every kind—furry caps, extra-large cardigans, outlandish overalls—arrive from across the world to Jindal’s recycling plant in this textile town 90km north of New Delhi. The 30-year-old, who oversees the family’s business, peers nonchalantly at a crumpled woollen garment: The red-brown pullover was originally made in India for US label Garrett Scott years ago and has since made the journey back to its country of make in the hold of a ship and then by truck to the Jindal factory.

Labels matter little to him; what he gets out of the rags does. Dharam Pal Woollen Industries, the company the Jindals own, makes 10,000kg of yarn a day from 20 tonnes of used clothes that lie in an open tin shed, ready to go into the shredder for extracting flossy fibre. This raw material is then used to produce yarn for making blankets, school blazer fabric and red-and-black checkered drapes popular among the Masai population of Tanzania and Kenya.

For decades, second-hand garments from the West have created a thriving business in India, as cheap clothing for millions of the country’s poor. The trendier lots routinely resurface in urban flea markets such as Sarojini Nagar in New Delhi and Linking Road in Mumbai, where fashionable collegegoers and their mothers pluck bargains at dirt-cheap rates. But now a huge amount of discards from well-heeled consumers in the US, Canada and South Korea are ending up in Panipat, Asia’s biggest textile recycling hub, to get a second life. 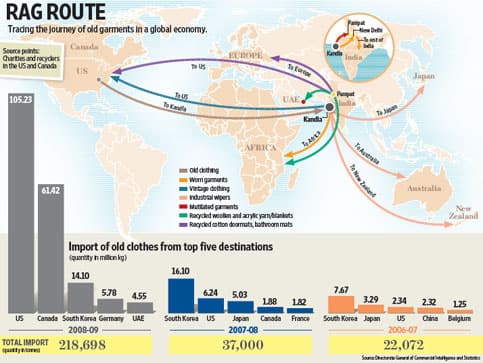 The business of textile waste recycling is less known.

The RBI is holding back more cards than it has placed o ...

RBI admits it will miss inflation target but remains ov ...

Where are the stock markets headed?

Hand-downs that arrive in India are pulped to make everything from low- and mid-range doormats and prayer rugs to blankets and bed linen. Leftover garments are cut into square pieces to be sold as industrial wipers for the paints, chemicals and construction industries, for both local and international buyers in Japan and Australia. Waste is used to stuff pillows and mattresses. 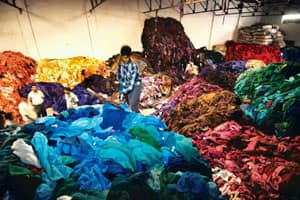 Fresh life: Heaps of rejected clothes at a recycling unit in Panipat. Second-hand garments get recycled into various fabrics, including drapes popular among the Masai population of Tanzania and Kenya. Pradeep Gaur/Mint

The booming demand has seen imports zoom despite government moves to restrict their entry because local textile units have been complaining of unfair competition from imported used garments. In 2008-09, imports jumped 489% to Rs409 crore, over the previous year. Around 219,000 tonnes of old clothes were shipped in fiscal 2009, against 37,000 tonnes the year before. In the last fiscal, between April and November, 100,000 tonnes of goods worth Rs48 crore arrived, according to data available with the Directorate General of Commercial Intelligence and Statistics, a government agency that compiles trade data.

Panipat revels in its “shoddy" existence, the local slang for recycled yarn. Bathroom mats that use recycled cotton yarn is a Rs2,000 crore industry. The business of using recycled acrylic and woollen threads for blanket manufacturing has annual revenues of Rs700-1,000 crore in Panipat alone, says the All India Woollen and Shoddy Mills’ Association.

Annual sales of the global used-clothing industry are estimated to be $1 billion (around Rs4,740 crore) —half a per cent of the $200 billion clothing industry, according to a 2005 study by Sally Baden and Catherine Barber for international charity house Oxfam. It has grown 10-fold globally since 1991, the year India’s economy opened up.

The economics of recycling is compelling. Prices of the cotton yarn that is needed to support Panipat’s Rs10,000 crore furnishings business are up 40% in the past six months. Costs can be halved by using recycled yarn.

“Our foreign customers prefer fresh cotton. But we’d like to use more recycled yarn to keep prices low," said Ramesh Verma, president of the Handloom Exports Manufacturers’ Association, Panipat. Around 30 units produce 500 tonnes of recycled yarn a day out of cotton pants and T-shirts that is used to make mats.

Exporters such as Nitesh Mittal swear by recycled cotton yarn. “They are production-friendly. Besides, my customers want good rates; they are less quality-conscious," says Mittal, who makes Christmas-themed doormats for US and Italian discount stores.

However, the old-clothing business has come under attack from the textile lobby. A 2008 parliamentary committee set up to look into the issue of worn clothing imports had observed that illegal imports were hurting local textile units.

In 2004, worn garment imports were placed under the restricted list, meaning a commodity trader can bring in goods only a single time after paying a penalty. The government had, however, relaxed the rule for some: 14 companies located in Gujarat’s Kandla SEZ have licences to import freely for sorting and repairing clothes for exports to Africa. This has led traders to complain of monopolistic practices and unfair advantage. SEZs are allowed to send 15% of the cost insurance freight (CIF) value for sale in the local market.

The Textile Recycling Association, representing the Kandla sorting companies and recyclers, however, maintains that only inferior clothes meant for use by the poor enter the country. All shipments are fumigated by certified international agencies.

The Kandla SEZ, according to the association, imported goods worth Rs297 crore in the last fiscal, contributing Rs315 crore to the country’s foreign exchange through exports. In this labour-intensive, big-volume, low-margin business, workers are needed to sort and grade clothes; the SEZ employs 3,000 people every year.

“It’s the illegal imports through customs that must be stopped," reasons Prakash Jain, president of the Textile Recycling Association.

In the last four years, India received imports from at least 30 countries, and oddly, from third-world Kenya, Tunisia and Congo. Consignments have also come in from China, the UAE, Lithuania, Slovenia and Latvia. The 2005 Oxfam report notes that the second-hand clothing trade is poorly regulated, and highlighted the existence of customs fraud as new clothing is passed off as old, leading to a revenue loss.

Meanwhile, at Delhi’s Azad Market, the country’s biggest wholesale old clothes market, sewing machines whir on the first floor above Dileep Kumar’s shop. Clothes are unpacked from arriving bundles, mended and iron-pressed before they are resold. In this largely all-cash unregulated trade, Kumar buys old jeans for Rs25 apiece from importers and sells them for Rs35. Traders say 90% of the goods arrive here from Kandla.

Other traders in the market such as Kuldeep Kohli keep tab on auction sales in the city’s five-star hotels. He buys bedsheets, towels and waiters’ black jackets. Most of the towel rags head to small worskshops, used in straightening copper wires. The jackets are hot-sellers among advocates practising in small towns. “Not everyone is rich, even lawyers."

“It’s like the Wal-Mart effect," says William Schapiro, president of Whitehouse and Schapiro Llc, an old-clothing business based in the US that dispatches clothes to India. “The clothing makes everyone richer because it’s affordable to lower-income people around the world."

Schapiro says a large part of the garments is sourced through donations to charities in the US, which in turn sell them to thrift stores and recyclers. While there are criticisms over whether donated clothes intended for poor communities actually reach them, Schapiro reasons that by offloading them, charities are able to raise billions of dollars to fund their social programmes and save used clothes from going into landfills.

“It’s one of those industries whose positive impacts on world trade is unknown. It adheres to principles of fair trade, supports many small businesses, and operates without government aid or help," Schapiro adds.

The reality, says Meenakshi Gupta, the founder of Goonj, a non-profit organization that distributes old clothes, is that the need for clothing has not been filled in India. Out of the collections it receives, the Delhi-based outfit uses the cloth to make reusable sanitary pads for rural women. In many parts, women still use newspapers, mud and ash during menstruation. “There’s a poverty level where people continue to suffer during winter because they don’t have enough to cover themselves," she says.

Ram Bahadur, 34, a migrant from Bihar who works at Jindal’s recycling plant, retells his story of this basic need. Coming from a large family of 11 members, he says they always needed clothes during winter. He carries home the blankets the company gives away as a bonus every year. “Earlier, we used to sleep wearing lots of clothes because we did not have enough quilts. Today, we wear less and sleep lightly with these blankets."