Under the terms of the deal, Idea will buy a 40.8% stake in Spice held by the BK Modi group for Rs2,720 crore. TMI, which holds a 40% stake in Spice, will see that transforming into a 5% stake in Idea after the two telcos are merged. In addition, TMI will acquire a 14.99% stake in Idea through a preferential allotment, paying around Rs7,295 crore for this. 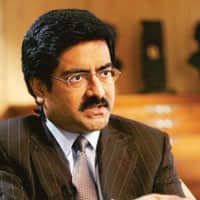 Kumar Mangalam Birla, chairman of the Aditya Birla Group of which Idea is a part, says the deal is a strong inflection point for Idea (Photo by: Bloomberg)

The merger, which ends weeks of speculation, will see other shareholders in Spice receiving 49 shares of Idea Cellular (after the TMI preferential allotment) for every 100 shares they own in the Modi-run firm. The deal, subject to regulatory approval, is expected to conclude in the next 6-12 months.

According to terms of the deal, Idea Cellular will buy 40.8% in Spice Communications from MCorpglobal Communications Pvt. Ltd, an investment vehicle of the BK Modi group, at Rs77.30 for each share, or a total of Rs2,175.91 crore. That price is at a 42.22% premium to the price (Rs54.35) at which Spice Communications shares closed on Tuesday. The shares have risen 135% since end-March.

Idea Cellular, in accordance with Indian takeover rules, will make an open offer to the minority public shareholders of Spice Communications. Such shareholders will have an option to either sell their shares at Rs77.30 each or opt for a share swap. Idea Cellular will also pay Rs543.97 crore as part of a non-compete agreement with Modi, his affiliates, andentities controlled by the company.

The deal, which at least one analyst said was expensive, allows Idea Cellular an entry into the Punjab and Karnataka markets, the licensed areas or circles that Spice Communications is present in with 4.4 million customers. For TMI, the deal presents an opportunity to consolidate its presence in the second largest and fastest growing mobile phone services market in the world. The Malaysian firm also potentially gains an entry into so-called third generation or 3G phone services for which India expects to auction licences later this year or early next.

“It gives us entry into two very significant circles, that is Punjab and Karnataka, where rather than build from scratch we are choosing to take over Spice, which has 4.4 million-odd subscribers in both circles together, and obviously there is always an incumbency advantage in the case of a take-over like this. We are very confident of being able to improve margins and profitability in the two circles in the next couple of months," said Birla.

“There is no logic in paying non-compete agreement for Spice Communications as there is no place in the market (for a new firm). Spice has been on sale for a very long time and I doubt whether they would have survived in the long run as the market has become a big operators game," said Ravi Shekhar Pandey, a research manager at Springboard Research.

“Of course it is higher, if you look at today’s market price, markets keep changing. But you’ve got to look at the composite transaction," he said.

Birla was even more bullish. “The deal just ups the quality of Idea operations, its balance sheet and therefore it is a very strong inflection point for Idea," he said.

Shares of Spice Communications gained Rs17.50 each, an increase of 32%, to close at Rs72.35 on the Bombay Stock Exchange (BSE). Idea Cellular’s shares gained Rs2.75 or 2.8% and closed at Rs101.90. Telekom Malaysia International Bhd had requested for suspension of trading in its shares today following the announcement of the deal, at the Bursa Malaysia Bhd, the Malaysian stock exchange. Spice Communications informed BSE that Bhupendra Kumar Modi, chairman, and Dilip Modi, managing director, resigned from the board of the company on 25 June 2008.

“The deal is really a win-win situation for everybody involved as Idea has now an entry into two new markets and TMI is getting access to the whole Indian market," said Marc Einstein, senior industry analyst, information and communication technologies research, Frost and Sullivan Asia Pacific.

In a separate announcement to the Malaysian stock exchange, TMI said it will emerge as the second largest shareholder in the enlarged Idea as a result of the merger.

“The transaction will involve TMI Mauritius Ltd, a wholly-owned subsidiary of TMI Bhd subscribing to 14.99% equity interest in Idea, for a cash consideration of Rs7,294.5 crore or Rs156.96 per Idea share. Subsequently, TMI Mauritius shareholdings in Idea will increase to 19% pursuant to the merger of Spice and Idea. TMI Mauritius will also have a call option on Birla Group shares for incremental stake in India. TMI expects to equity account its investment in India," the statement said.

The statement further said that TMI will be infusing about $1,060 million (Rs4,536.8 crore) for funding support to Idea’s national roll-out plans and becoming a pan-India operator.

“Idea is an ideal match for us in so many ways; among others, our non-overlapping operational circles, its proven financial performance and operational capability, and its nationwide licences. The transaction meets our financial criteria. In a nutshell, this is the best option to give us an immediate near pan-Indian presence with further growth potential and yet with earnings accretion from the first full year of operations," said TMI’s president and group CEO, Jamuludim Ibrahim. TMI expects the combined entity to contribute 15-20% of TMI’s consolidated profits by 2010.

The deal helps his group “get a global play in the mobile phone handsets mobile VAS (value added services) and BPO services," Modi, chairman of the Spice Group, the parent company of Spice Communications, said in a statement.

An agreement to supply phone handsets for TMI’s international operations and Idea Cellular, as also providing software and back-office support to them, were not part of Wednesday’s deal and will be dealt separately later, he told Mint in a phone interview.