New Delhi: Sandip Das joined Malaysia’s Maxis Communications Berhad as chief executive officer in 2007 after starting what is now Vodafone India Ltd as joint managing director in 1994. Maxis holds a 74% stake in Aircel Ltd, India’s seventh largest telecom service provider. Das, 54, is a member of the board of directors of Aircel and is overseeing its operations until a chief executive officer is found. This enables him to look at the Indian market from the outside and the inside. He spoke in an interview as the telco prepares to ride the wireless data wave, expected to hit Indian shores in the next few quarters. Edited excerpts:

There is a lot of speculation that Maxis is looking to exit India. To what extent is this correct? 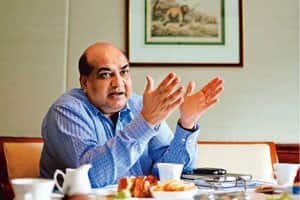 Making an impact: Das says it’s important for Aircel to have a unique market position to stand against bigger and older telecom operators.Photo by Pradeep Gaur/Mint.

We did the largest nationwide 2G deployment in a year, across 14 circles where we received spectrum and licences in January 2008. We have the same number of 3G circles as the market leader and we are the second highest in number of BWA circles. We have built a nationwide brand from scratch. What else can a company do to show its intent?

There are larger issues—we are sitting on the cusp of a very large data tsunami now—how are companies gearing up for that, the regulatory environment, the investment climate, the telecom policy and broadband strategy, the state of the economy and providing infrastructure to feed the growing demand in the country.

While there is a lot of talk of consolidation, nothing has happened in the last 6-7 years because these other issues have to be sorted out.

How would you say Aircel is doing?

We have a mix of circles. If you look at our original circles, our Arpus (average revenue per user) are comparable to the incumbents. In the new circles, we are sometimes the seventh or eighth operator where Arpus are incremental, around $1-2, which we are battling against. This is why we are clearly positioned on the data.

We saw that 60% of the market is under 25 and there will be huge data demand. We coined this expression of pocket Internet which is creating great demand. I think in 2010, we were the fastest growing telco. In 2011, we focused on roll-out but now we have launched a number of data products that are doing very well. We were the first to equalize 2G and 3G tariffs which has done very well for us.

There are enough bigger, older operators. It is very important for a company like ours to have a unique market position.

The Indian telecom business is a SIM (subscriber identity module) card business. The entire industry put together sells 30-35 million SIM cards, of which 10-15 million are real subscribers. The core subscriber base is not moving up. Take out around 30% below the poverty line, elderly people, rural people, then you’ve already covered everybody, in a sense. So when people like us enter markets doing incremental business, it’s difficult to compare our Arpus with those of the incumbents.

The incumbents have spent years rolling out their networks. How can a new operator compete? Networks have depreciated over time so cost to serve (cost incurred by an operator to maintain and serve a mobile connection) has gone down to almost nothing.

The number seven player entering with a 1,800MHz (megahertz) network needs a network almost double that of a 900MHz operator. You can’t compare the new players with the older ones. It’s harsh to do that. Nobody is getting incremental RPMs (revenues per minute) better than any one else. In some states our RPMs are comparable to the incumbents.

Aircel is betting big on data. Your strategy?

Our areas of strength have been Tamil Nadu, Bihar, Assam, the North-East and Jammu and Kashmir where almost 60% of our business comes from. We want to reinforce our leadership in these areas. We went for 3G licences in these areas and we added Karnataka and Andhra Pradesh due to their high potential as data markets. We tried going the same way for BWA but the bidding went quite high. But we were able to get eight circles on top of these.

In Tamil Nadu, our strongest circle, we have spectrum in 900MHz, 3G and BWA. In incumbent circles where we are strong in voice, we will now start adding data bundles. Data will be our prime mover. For data, everyone is on the same starting line.

We have a lot of knowledge and success with data networks. We have a strong suite of content and content development. To succeed at data, you need to be strong across all sides, including the back end.

We will play or facilitate a play in the device area as well, depending on how the economics go. The device subsidy model is difficult in India so it will have to be part subsidy and part payment. We are working on a selection of low end feature phones. Relevant content is very important.

It’s very difficult to get an incumbent’s subscriber into my network. But I can be his second SIM or data SIM—play the trojan horse where I am a new operator and push our products through the data route.

It’s difficult to differentiate in technology. We have mapped town-wise concentrations and we will target those areas, at what are called nomadic users. Hotspots form an important part of the strategy, but you have to have a happy mix of networks in concentrated areas and some degree of ubiquity.

People already view us as a data brand which is something we have worked on and we have to sustain it by constantly offering relevant services.

There are a few reasons. Networks are patchy and need to develop. Also, the price differential is high. People are not bothered about whether it is 2G or 3G, they don’t want differential data prices. The experience has not been spectacular. Tariffs are a problem as the auction prices were high. I think it’s a matter of time. The industry’s move to have similar pricing is getting great returns. But 5MHz is tiny. If there was more bandwidth, the networks would be more robust.

Also, the device prices need to come down substantially.

The bigger players also have a problem of congested 2G networks. They are using 3G to augment voice and decongest 2G networks. In our case, in a number of places, the 4.4MHz is not completely utilized and we don’t have a voice spillover, so we are able to provide a better data experience.

Should 2G and 3G spectrum be treated as equal?

As the world is progressing, spectrum is becoming agnostic. So how do you price it? How do you tide over the past and the present?

The only difference is that lower the band, the fewer the towers over a certain area. That will always be the case.

There are no easy answers. What is happening is now is the western world (Europe and US) is pushing for FD-LTE (frequency division LTE). India and China, one-fifth of the world’s population, are starting TD-LTE at the same time. This means that India and China, for the first time, will have a say in the technology standard. One of these countries makes equipment and both countries make handsets. So equations of companies like Nokia and Ericsson have changed.

The centre of gravity will change and costs will fall drastically. In the western countries, cost to serve is still high. India and China are demand- and cost-driven markets where the technology is rolling out real-time and not delayed. The brute force of the markets will ensure, in two years, costs will be lower.

Now the big challenge is a device that works across all the 4-5 bands and technologies.

What are the challenges expected for the data revolution in India?

Rolling out of data networks, and at what costs, is very critical now. Voice networks are congested for the incumbents. Those with uncongested networks have small slivers of 4.4MHz of 2G and 5MHz of 3G, which is next to nothing. The real challenge here is how will operators ride the next two years, where voice revenue dropping is not being compensated by data.

People with large voice businesses can ride it over as they have the tons of money. But for people who are just starting, it will be very hard.

In Malaysia, Maxis is a 51% Ebitda (earnings before interest, taxes, depreciation and amortization) where 45% of revenues come from non-voice. Our turnover is close to $3 billion but market cap is $17 billion, making it the fifth largest company on the Malaysian stock exchange. The Arpu for post-paid is $30 and 30% of subscribers are post-paid and 45% of revenues come from post-paid. The blended Arpu is $18 and for prepaid it is $10. But Maxis has 16MHz of 900MHz spectrum, 25MHz of 1,800MHz, 15MHz of 3G and about to get another 20MHz of 2.6MHz. The plan is to move towards 100MHz of data spectrum.

In Malaysia, about two years ago, the government realized it was lagging far behind on broadband penetration in the region. The government gave the operators carte blanche on data bands and set targets of 50% penetration by 2012. The industry got down together and launched wireless broadband (3G) and covered 82% of the population in a year-and-a-half. Now penetration is at 56%, far ahead of the targets. The government then went to the fixed line provider with 2.5 billion ringgit (about Rs4,326 crore) and a task to build a national backbone optical fibre.

Sharing is key. Maxis has just signed a deal with the fourth operator where they get access to a national network from day one, through the pooling of resources. Countries that want to create access have to allow sharing.

India should be spending more time figuring out how to enable sharing. A city like Mumbai has four times the towers it needs because active sharing is not allowed and roof-tops is a business. Another problem is device costs. In Malaysia, after seven years of 3G, only 30% have 3G phones. Subscribers don’t have a data compliant phone. Unless the whole ecosystem becomes affordable, the penetration will not grow drastically.