New Delhi: Nearly three years after the Union government privatized the airports in New Delhi and Mumbai, the consortia running them have been told to provide for at least Rs420 crore as employee compensation as most workers, earlier employed by the government, have declined to work for the new companies. 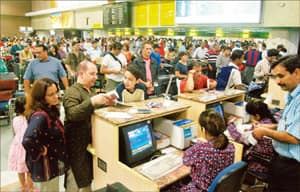 The May 2006 privatization agreement stipulated that the consortia offer employment to at least 60% of the workforce and pay for a voluntary retirement scheme, or VRS, to those who choose not to work under the new managements.

Less than 5% of the employees have agreed to work for DIAL or Mial, as the two airport companies are called in short, and, this month, at least 4,000 of them will return to the state-run Airports Authority of India, or AAI, the country’s airports regulator that also runs most of the airports through an eponymous unit.

AAI has floated a VRS for the employees who have decided to stay with it and not joined the private airport consortia.

“Based on the finalized VRS, the estimated amount payable by Mial works out to Rs214 crore. However, this may be considered as provisional and may vary depending upon the actuals and effect of pay revision due with effect from 1 January 2007," AAI chairman V.P. Agrawal said in a letter to Sanjay Reddy, managing director of Mial, earlier last month.

“I, therefore, request you to personally look into the matter and make necessary arrangements of funds to remit this amount to AAI at the earliest,"Agrawal added. The letter was reviewed by Mint.

The AAI chairman also asked DIAL to remit Rs209 crore in a letter to its managing director Kiran Kumar Grandhi.

The VRS scheme for these public sector employees has already been launched by AAI in March and ends by mid-April.

In New Delhi, of the 2,394 employees at the Indira Gandhi International Airport in 2006, 157 have retired, removed from service or died between then and March 2009. Of the remaining 2,237, DIAL was to absorb 60% of the employees, but only 141 workers chose to join, leaving it responsible for 60%, or 1,201 employees, of the remaining. At an average employee cost of Rs17.40 lakh under VRS, the total compensation works out to Rs209 crore.

In Mumbai, the figure has been calculated keeping in mind that just 160 of at least 2,400 people accepted the Mial offer.

According to data of March last year, AAI had 19,180 employees, including those at the Delhi and Mumbai airports.

A financial analyst, who tracks the listed parents of DIAL and Mial, said the two airport firms are likely to treat the latest outgo as a one-time liability on their books. They will “take it as a capital cost and finance this cost as debt for the life of the project", said the analyst with a Mumbai brokerage firm, who did not want to be identified because he is not authorized to speak to the media.

Shares of GMR Infrastructure rose 2.30% on Thursday, the latest day of trade, to Rs100 each on the Bombay Stock Exchange and the GVK Infrastructure scrip expanded 3.94% to Rs25.05. The bourse’s benchmark index, the Sensex, surged 4.5%. Markets were closed on Friday.